The Lebanese government and UN Refugee Agency (UNHCR) say they are trying to scale up their assistance to hundreds of thousands of Syrian refugees but are hampered by a lack of funds.

On 7 February Médecins Sans Frontières (MSF) released a report, entitled Misery Beyond the War Zone, which painted an alarming picture of the living and health conditions of refugees in Lebanon and called on both the UN and the government to increase registration and aid.

In December, MSF surveyed 2,100 refugees in three areas of Lebanon and found more than half of those interviewed, whether they were officially registered or not, were housed in substandard structures and could not afford medical care, with nearly one-third of them having suspended treatment already under way because it was too expensive.

“Something has to be done. We can't accept that someone who is fleeing a war has to negotiate with NGOs to get medical assistance,” Fabio Forgione, head of mission for MSF Lebanon, told IRIN.

Aid agencies in Lebanon are facing growing difficulty keeping up with worsening conditions, as the number of refugees increases and the financial situation of those already present degrades.

There are 163,036 Syrian refugees registered with UNHCR in Lebanon, another 74,587 awaiting registration, and a further 50,000 unregistered refugees, according to MSF estimates, though others have given much higher figures.

In November, IRIN visited dusty Muqayble village in the remote Wadi Khaled area of northeastern Lebanon. One of the most widespread needs refugees expressed was medicine. UNHCR covers 85 percent of medical expenses, in line with the Lebanese government’s coverage for its own citizens. But so high is the need, that for some, even this is not enough.

“Where do we get the remaining 15 percent, if we are unemployed?” asked Mohammad*, a refugee from Homs. He lived in a school sheltering 100 refugees. Only two of them had work.

"The first priority is saving lives. From this point, there are competing priorities for shelter, food, health care, cash assistance."

In one of the unfinished homes nearby, Latifah*, in her sixties, lay on a mattress in the corridor. She suffered from high blood pressure and rheumatism, but said she has received nothing but an anti-inflammatory drug in the six months she had been there. Instead, refugees and host communities had been collecting money among themselves to pay for medical expenses.

Problem with the registration system?

“There is a lack in the organization and the delay to be registered is too long,” Forgione said. “In the meantime, the unregistered refugees don't get sufficient assistance.”

MSF, which will increase its own activities in Lebanon, called on the Lebanese government and UNHCR to scale up their registration system, set up transit sites for new refugees, and help unregistered refugees.

Ninette Kalley, UNHCR representative in Lebanon, acknowledged the delays but said the organization is constantly scaling up. It has increased staffing levels from around 60 at the start of the crisis to more than 250 today.

“We have double shifts in some of our centres. New registration centres will be opened in Beka’a and Tyre this month. We are also working to increase registration capacity in Beirut, where waiting periods are longest,” she told IRIN.

“We have agreements with several NGOs to help any refugee, even the unregistered ones and we're expanding these partnerships,” she added.

UNHCR said it is working with the Lebanese government to identify transit sites, focused around Beka’a and the north of Lebanon. This would allow for identification of vulnerable persons in the unregistered population, and rapid assistance in a situation of increased influx.

Nevertheless, UNHCR and its partners in Lebanon have received less than 15 percent of the funding needed for aid work until June, as part of the Regional Response Plan for Syrian refugees.

Syrian refugee families in Wadi Khaled, northeastern Lebanon, are renting out sheds and unfinished buildings without doors and windows 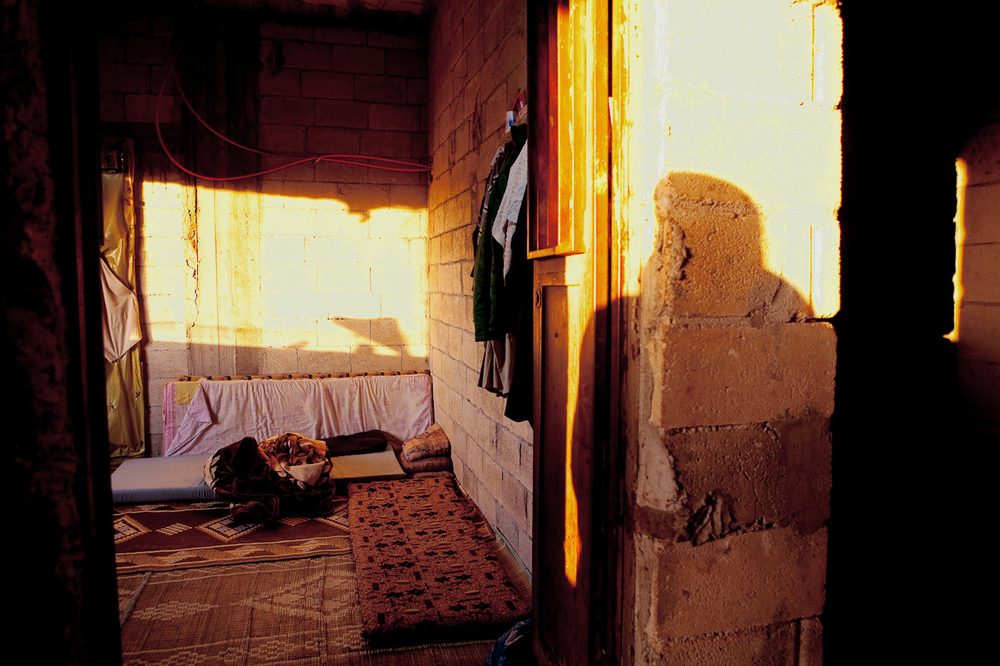 “This necessitates the prioritization of activities,” Kalley said. “The first priority is saving lives. From this point, there are competing priorities for shelter, food, health care, cash assistance.”

On 30 January, donors pledged more than $1.5 billion in humanitarian aid for Syrian refugees and those in need inside Syria, but aid agencies are worried nonetheless.

“We don't know when the money promised will be sent. The situation cannot wait,” Forgione, of MSF, said.

To face this emergency situation, the Lebanese government announced in December a plan - now updated to seek $370 million - to be able to help refugees.

Last week, Hala El Helou, emergency coordinator at the Lebanese Ministry of Social Affairs, told IRIN the government had only received a few in-kind donations from Saudi Arabia, Iran and China, some financial contributions from the UN to do capacity-building, as well as $700,000 from Norway, and around a $1 million grant to be channelled through the World Bank.

The government had received no contributions for the health sector of its plan, “which is one of our most crucial at this point...

According to UNHCR, the number of refugees fleeing Syria to neighbouring countries could top one million by June 2013.