“Conditions are overwhelmingly inadequate, with intolerable physical conditions that seriously add to the mental health problems of detainees,” Ian Rintoul, a spokesman for the Refugee Action Coalition (RAC), told IRIN.

His comments come amid unconfirmed reports of unrest at the centres, and at least one attempted suicide on Manus Island over the weekend.

In early January, photos leaked by Manus Island detainees showed tin huts with no doors or windows and susceptible to malaria-carrying mosquitoes, as well as detainees, including children, sleeping outside to escape the heat - often without mosquito nets.

The Australian authorities, however, say there have been no reported cases of malaria, and vaccinations and prophylactic antibiotics are available on Manus Island.

But according to refugee activists, health services on Manus Island during the government’s previous offshore processing policy were inadequate.

In a bid to discourage the number of boat arrivals to the country, on 13 August 2012, Canberra returned to offshore processing in both locations after abandoning it in 2007, following strong criticism by human rights groups. Close to 1,500 asylum seekers were processed on Nauru under the previous government’s Pacific Solution, with another 365 on Manus.

“Manus Island should be closed,” said RAC’s Rintoul, following this weekend’s unrest and the transfer of another 40 single male asylum seekers from Darwin. “The idea that it is a fit place to send families and children is absurd. Not only is the Australian government refusing to process claims of asylum seekers asking for protection in Australia, it is deliberately mistreating them by sending them to Manus Island.”

A resident of the Manus Island offshore processing centre sleeping outside. Many of the residents are from Sri Lanka 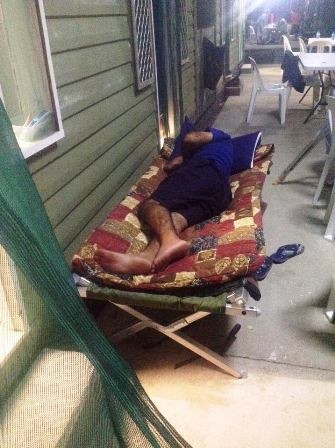 Echoing this, Victoria Martin-Iverson, a spokeswoman for the Refugee Rights Action Network, who is in direct contact with detainees on the island, said that in addition to concerns over malaria, housing for asylum seekers did not even have proper doors, meaning “detainees cannot sleep or change clothing in private, which is severely compromising their human dignity.”

Conditions on Nauru, just 21sqkm, and 4,000km northeast of Sydney, are not much better.

In December, the UN Refugee Agency (UNHCR) released a critical report on conditions at the facility, noting that they fell short of international protection standards. The team found accommodation conditions harsh, a fully functioning legal framework absent, and an inadequate capacity to assess refugee claims.

Noise and dust from construction work on a more permanent facility did not help. UNHCR also found a number of transferred asylum-seekers with pre-existing trauma, some of them survivors of torture, the report said.

Meanwhile, Amnesty International researchers on a three-day inspection of the same facility recently found a “toxic mix of uncertainty, unlawful detention and inhumane conditions, creating an increasingly volatile situation on Nauru, with the Australian Government spectacularly failing in its duty of care to asylum seekers.”

In January, water and sanitation remained an ongoing concern, and a potential violation of Australia’s human rights obligations, said Australian NGO Humanitarian Research Partners, which has called for an immediate rectification of conditions by the Australian government.

“Such conditions could amount to cruel, inhuman and degrading treatment, which is absolutely prohibited by the Convention Against Torture as an unimpeachable rule of international law,” the Perth-based group said.

Meanwhile, there have been unconfirmed reports of self-harm, including up to 30 suicide attempts at the two facilities since they reopened. According to RAC on 14 January, a group of five Iranian, 15 Afghan and 25 Iraqi asylum seekers were on hunger strike following their transfer to Manus Island.

“These people are being punished, despite having committed no crime, just so the government can make an example of them. The government needs to end this practice before more senseless damage is done,” said Greens Party Senator Sarah Hanson-Young.

Most asylum seeker arrivals to Australia come from Afghanistan, Iran, and Sri Lanka, with the latter being most at risk of being sent home.