When Shaza Alrihawi found a bullet on her car one morning, it was the final straw convincing her she needed to get out of Syria. Like thousands of Syrians, she went to Germany in search of safety in 2015, around the height of the civil war. But she doesn’t want this to be the point of her story.

At 44 years old, Alrihawi is also one of the leaders of her community working to improve asylum policies in Europe, through the Global Refugee-led Network (GRN). Founded in 2018 in the wake of the first-ever Global Summit of Refugees, the GRN advocates for refugee-self representation organisations to promote refugee participation and inclusion.

Alrihawi and fellow refugees were in Geneva this week to take part in the UN Refugee Agency’s (UNHCR) annual consultations. The event “brings together humanitarian workers, refugees and other displaced people and civil society to discuss how we together can address current challenges,” according to Annika Sandlund, UNHCR’s head of partnerships and coordination.

From aid actor to refugee

Before fleeing her country, Alrihawi worked for the United Nations Relief and Works Agency for Palestine Refugees in the Near East (UNRWA). She first sought asylum in Sweden, but her request was denied. That’s when she came face to face with the harsh reality she had been preaching for years.

“I had no rights to anything. No study, no work, and I was sitting at home feeling like my skills, my knowledge just vanished,” she said. “I thought ‘oh my God’, all the international commitments and all what I hear about, in reality, somehow does not exist.”

As a sociologist back home, Alrihawi used to work with cases of gender-based violence. She decided to put her previous experience to good use in Europe and co-founded the Global Independent Refugee Women Leaders (GIRWL). She also integrated UNHCR’s gender-audit team, which monitors inclusion of women and girls issues in the agency’s meetings and reports.

“Refugees themselves are not a crisis, what has happened is the crisis.”

Alrihawi is bothered by the “refugee crisis” label. “Refugees themselves are not a crisis, what has happened is the crisis. If you look at them like that, it gives you a negative image, and you will see them as a heavy burden. If you see refugees as solutions or like resources, then you will treat them in that different way,” she said. 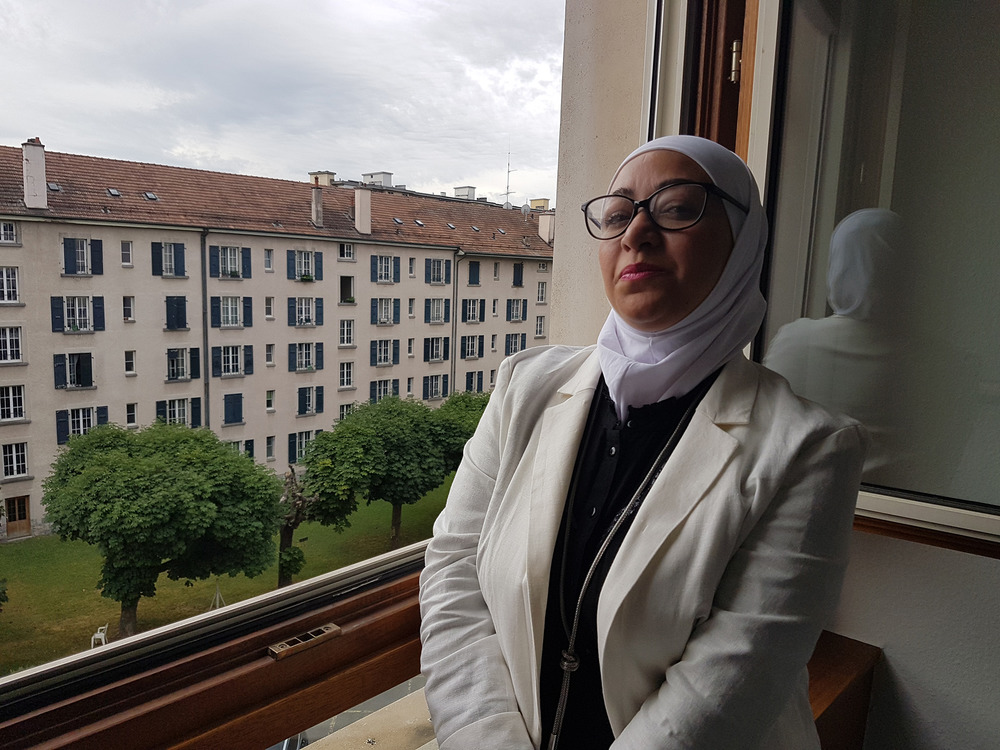 Alrihawi recently co-wrote a paper about refugee-led initiatives that sprung up during the pandemic, including to protect women from the heightened risks of domestic violence, from creating shelters, to setting up hotlines.

She stressed the importance of refugees for localisation, one of the themes of this week’s conference. The concept has gained steam in aid circles in recent years to recognise the need for the international aid community to have more equitable partnerships with local actors.

Alrihawi argues that refugee-led solutions are more sustainable than outside interventions. “All NGOs or agencies come to support and then afterwards leave, when the funds run out. But refugees will stay and continue their efforts to support their own community,” she said.

While innovative ideas are not scarce within refugee communities, they often struggle to secure funding. As a refugee in Kenya, Jean-Paul Bahikye Kasika wondered how so much money could be poured into international aid without much impact.

Bahikye Kasika fled violence and persecution in the Democratic Republic of Congo in 1996 after being tortured. He became a refugee in Tanzania and then resettled in Kenya, where he became a leader for his refugee community. His role was to collect the views of the group and report them back to the aid organisations.

“Sometimes we were underestimated, because we weren’t given a platform whereby we could discuss our needs directly with the authorities,” Kasika said. Complaining about the help they were receiving was not well received by the aid actors.

“If you post a message on social media about [the grievances of] the community, they are not happy because they do not want the international community to understand the struggle that refugees are going through. They feel like we are spoiling their reputation, and the donor funding space could be shrinked,” he said.

He founded the African Youth Initiative for Development (AYID) in Nairobi in 2018, which helps women refugees through training and microfinancing schemes. He is currently vice-chair of the Global Refugee-led Network’s branch in Africa, which groups similar initiatives across the continent. These are usually financed by the community itself. 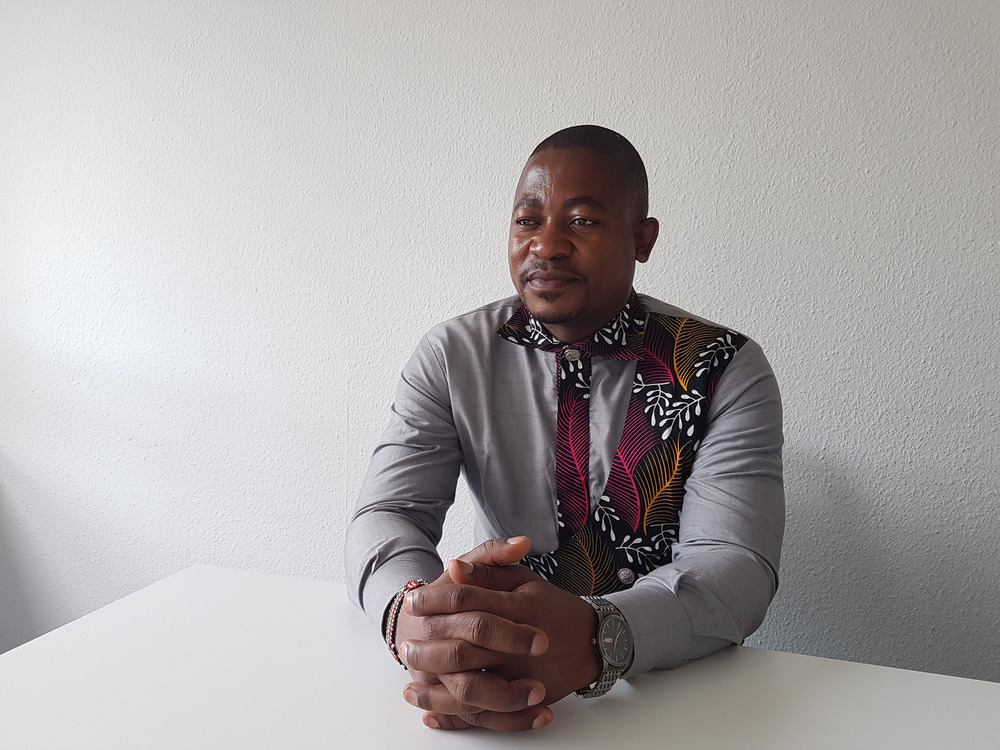 “Some of them started by one community member's contribution and from there, you try to do a proposal, mobilise resources, and with whatever little you have, you support your own people,” he said.

The next step, which is usually a challenge, is gaining the trust of big donors. Kasika says that the argument they often stumble upon is that refugee-led initiatives present a conflict of interest: Refugees are too emotionally involved or too vulnerable to have the capacity to run an operation. Kasika disputes this view. “Refugees are not vulnerable. It is the situation that we live in that makes us vulnerable, which is a temporary condition,” he said.

“Stakeholders are now saying, ‘yes, refugees need to take charge of their own issues and see how they can also contribute economically to the country where they are’.”

But refugee camps have become home to some communities for years and even generations. “It's prolonged, simply because of the lack of mechanisms for durable solutions,” Kasika said. It is perhaps the continuance of these crises that can act as a wake-up call for the international community and the need to “decolonise aid”.

“You can't feel the pain of a shoe that you are not wearing. It is the person wearing that shoe that you need to sit down with to understand that pain,” he said.

“Stakeholders are now saying, ‘yes, refugees need to take charge of their own issues and see how they can also contribute economically to the country where they are’.”

Without a passport, refugees are not free to leave their host country in Africa. Kasika’s group is advocating for refugees in Africa to have free mobility like there is in Europe. He argues such a policy could help bring economic growth to the continent.

Understanding the root causes of displacement

The Global Refugee-led Network is calling on states to commit to at least 25 percent participation of refugees in discussions at the next global forum in 2023, arguing that they can help come up with local solutions to address the daily challenges that they themselves face.

But they can also be a wealth of knowledge to understand what triggers crises. Mauricio Viloria is an academic researcher specialising on internal displacement in Colombia caused by over 50 years of armed conflict. In 2008, the 44-year-old university professor became his “study object” when he and his wife were forced to seek asylum in Argentina after being threatened for their work. 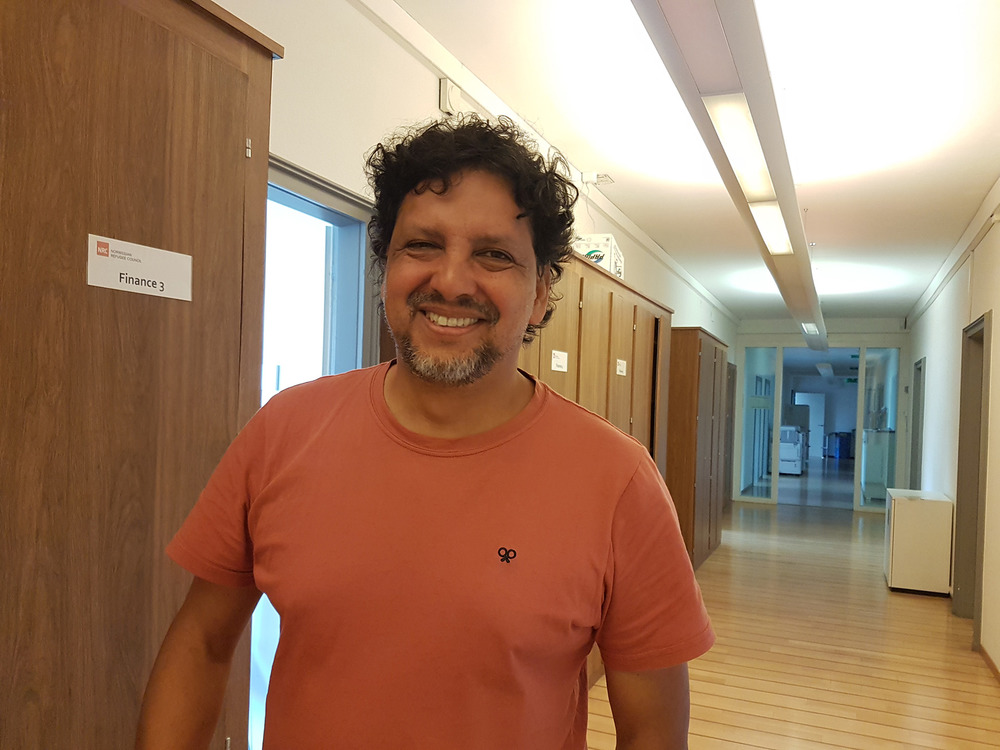 Michelle Langrand/Geneva Solutions
Mauricio Viloria, researcher specialising in forced displacement, was forced to flee Colombia because of his work, and sought asylum in Argentina.

“It was an intense contrast between theory and practice,” Viloria said. Despite knowing all the international norms from A to Z, he witnessed first hand the disastrous consequences from the gaps in implementation and even “got angry” at the academic world for what he saw as a lack of commitment with the struggles of the displaced people.

Along with other Colombian refugees across the region, they formed the Network of Colombian Victims for Peace in Latin America and the Caribbean. Their aim is to analyse the root causes of the Colombian conflict and the ongoing displacement crisis despite the peace agreements signed in 2016.

One of their initiatives, which focuses on promoting refugees’ right to justice, truth and reparation, led to the creation of a commission that collected the testimonies of those who had fled the Colombian conflict and had been left out of the ongoing transitional justice process within the country.

Viloria’s group, which is also part of the GRN’s Latin American chapter, is keen to show that refugees can have different and more active roles other than just being a “moving story” to raise funding or a “good example” to show donors their money has been well spent.

Viloria knows that conferences like the one in Geneva will not solve all problems, but he sees it as a chance to “create concern” among aid actors.

The refugee crisis in Ukraine

Alrihawi, Kasika, and Viloria all come from different backgrounds and are helping address the plight of refugees in different ways. But they share the same concern about what the refugee crisis in Ukraine has revealed. The show of solidarity for Ukraine is a painful reminder for refugees worldwide that asylum policies often follow political agendas.

Kasika insists on making it clear that the war in Ukraine should be condemned, like all other conflicts, but wonders why the ongoing violence in the eastern part of his country, where dozens of civilians have been killed, has not received as much attention. “How many lives must be lost before a crisis is declared in DRC or in Sudan?” he asks.

Viloria recalls that such shows of solidarity towards a particular refugee community are not new. “Latin America has also seen a similar trend to segment responses,” he said, citing the example of Venezuelans, who have benefited from specific protections in some countries, while others like Haitians remained long ignored.

Viloria warns not only that such policies can breed tensions between different refugee communities but also that these measures tend to be temporary, creating differences in treatment within the same community and even within the same family.

The response to Ukrainian refugees in Europe “should be the model” for a refugee policy that is extended to all refugees and not only those from a certain nationality.

For Alrihawi, the response to Ukrainian refugees in Europe “should be the model” for a refugee policy that is extended to all refugees and not only those from a certain nationality. She is optimistic that it could be an opportunity to shake up leaders.

The growing threats of climate change, conflict, and economic instability have shown that “everyone can become a refugee one day”, she says. “We have to use this opportunity to change our policy by including the refugee communities.”