Seven years into a deadly and devastating war, thousands of Yemeni parents are using what little they have left to fight for an untold victim of the country’s conflict: their childrens’ education.

Ahmed Mahdi, 50, is one of them. The father of three drives a taxi in Yemen’s Houthi rebel-held capital city of Sana’a. He was already struggling to make ends meet by 2016, a year into the conflict between the rebels and Yemen’s internationally recognised government, which is backed by a Saudi Arabia and United Arab Emirates-led coalition.

That year, the government decamped from Sana’a to Aden and moved the central bank there too. After that, teachers at the public schools Mahdi’s three high-schoolers attended stopped receiving regular salaries, along with around 170,000 teachers and many more public servants in parts of the country controlled by the Houthis.

Many teachers had to abandon their classrooms: Some moved to parts of the country run by the government and where they would be paid; others took different jobs to make ends meet.

“A key devastating consequence of the ongoing war is the generations of innocent children left without schooling or education becoming easy targets for recruitment by the Houthis.”

But even as the conflict has raged – the last few months have seen a major escalation in airstrikes, shelling, and ground fighting – parents across Houthi-held provinces like Sana’a, Ibb, and Dhamar have banded together to slow down the exodus of teachers, working overtime to pay salaries out of their own pockets. If their children aren’t at school, some are concerned they will be more susceptible to recruitment as child soldiers – a longstanding problem in Yemen’s war. Others just want them to keep hitting the books.

“It’s very hard,” Mahdi told The New Humanitarian, referring to the payment of 6,000 Yemeni rials (around $11 according to the official exchange rate) he now makes to his childrens’ school in Sana’a. “The economic situation is really difficult.”

For Mahdi, the money is a major financial burden, given the fact that Yemen’s economy has effectively collapsed. But he hopes it is worth it. “I’ve had to double my shifts to provide for my family and also pay for the childrens’ education,” he said.

It’s hard to know just how many parents are pitching in to pay public schools and teachers directly, as the initiatives are largely informal. But Yahya al-Yanaie, the spokesperson for the Yemeni Teachers’ Syndicate and an adviser to the Ministry of Education, estimates that around 49,000 teachers at 8,000 schools are receiving some sort of income from families desperate to salvage their children’s education.

It’s a limited fix: The UN estimates that around 8.1 million school-aged girls and boys in Yemen are “in need of education in emergencies support”. Kids may be unable to attend school regularly for a variety of reasons apart from the interruption of wages: When families are forced to run from conflict, as has happened to some four million people in Yemen, their schooling is often halted. Dire economic circumstances mean some parents feel they have no choice but to put their kids to work, and infrastructure is a problem too, with more than 2,500 schools destroyed, damaged, or being used for other purposes.

According to al-Yanaie, who works with the anti-Houthi government, “a key devastating consequence of the ongoing war is the generations of innocent children left without schooling or education becoming easy targets for recruitment by the Houthis.”

Human rights watchdogs have repeatedly documented the recruitment of children into fighting by the Houthis: One recent estimate says 10,300 kids have been brought into the rebel ranks since 2014. A January report by the UN’s Yemen Panel of Experts said it had received a list of 1,406 children recruited by the Houthis who died on the battlefield during 2020, and 562 between January and May of 2021.

Pro-government forces have also been accused of using child soldiers, although to a lesser extent. 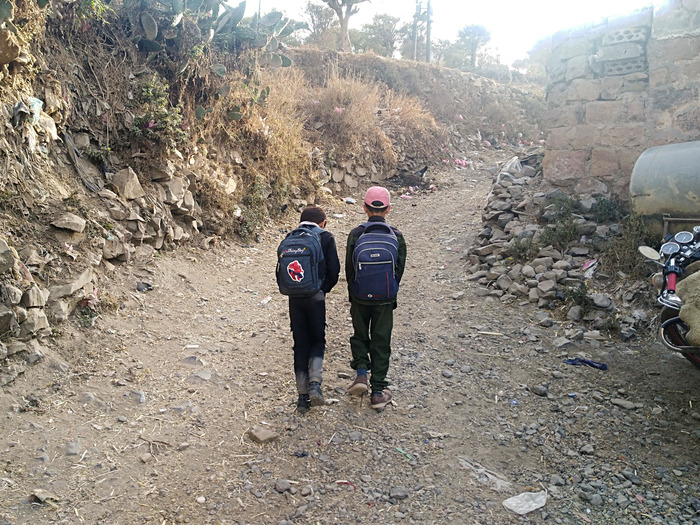 Boys and girls walking to school in the Houthi-controlled province of Ibb. (Abdullah Ali/TNH)

These concerns prompted construction worker Mohamed Abbad, 47, to bear the additional cost of 4,000 rials ($16) each month to teachers at the public school in rural Ibb province where his two sons are enrolled. Given that he makes 50,000-60,000 a month in total, that’s a major chunk of his income. Before the war, like most parents, he paid just 200 rials per student at the start of each year, for expenses.

At the start of the conflict, he said, his sons’ education was largely unaffected by the war, as was Ibb as a whole. But when the salaries stopped coming, so did many teachers. “The children would go to school and come back with no educational gain whatsoever,” he explained. “We feared for their future.”

In early 2017, a group of Ibb parents, tribal leaders, and community leaders got together and found the best solution they could: Students’ families – often with the help of relatives abroad – and well-off business people would pay school employees what they could.

Abbad believes his sons’ school was one of the first in the country to adopt this model, and described it as “an instant success”. Students from across the province began signing up for the school, before their own schools began implementing similar programmes. And in the years since, the model has taken off in other parts of Yemen that the Houthis control.

It hasn’t just been a benefit to students, Abbad continued: “Teachers needed this as much as parents did.”

Khalid Mohsen agrees. The 40-year-old taught maths at a secondary school in rural Ibb until September 2016, when he stopped receiving his wages and was almost immediately thrown into poverty.

The father of five was forced to skimp on meals, borrow money, and sell his possessions, while picking up other work wherever he could find it. “I worked loading and unloading food in grocery stores, worked in the fields with farmers… and even looked outside of Ibb [his home province] for jobs.”

But thanks to contributions from parents, he was able to go back to teaching in 2019. He now makes 40,000 Yemeni rials a month ($70), which is less than half of the 90,000 plus regular bonuses from his official salary. But it has been enough to get him back into doing what he does best.

“Although it’s a fraction of what I was paid by the government each month, and it barely covers my family’s basic needs, I’ve returned to the classroom and live in austerity,” he said.

According to al-Yanaie, most teachers who are getting money from their communities have, like Mohsen, taken a massive pay cut. “Teachers’ living conditions have plummeted,” he said, explaining how their situations have been “exacerbated by spiking inflation rates and the downward spiral of currency devaluation”.

The suspension of public servants salaries is just one factor in an economic and humanitarian crisis the UN has described as one of the largest in the world. The civil war has left nearly 70 percent of the country’s 30.5 million people in need of some sort of aid or protection, with more than 80 percent of the population living below the poverty line.

The fragmented country has seen its currency depreciate to record lows. There are currently different exchange rates in Houthi and government-run parts of the country, adding challenges to trade, worsening inflation, and making basics unaffordable for many.

It’s unclear exactly how many people are on the public payroll and haven’t received their salaries – some are now paid through a variety of routes, others get paid less than usual or infrequently, while others still get nothing at all.

Sana’a-based economist Rasheed al-Haddad put the number of registered public servants at around 700,000 people, including teachers. He said the suspension of their regular incomes has impacted roughly 22 percent of Yemen’s workforce, “turning them into poor people”.

Al-Haddad told The New Humanitarian that the wage stoppages have “eroded much of Yemen’s middle class, which barely keeps the country’s economy going”, adding that the impacts have cascaded into other parts of the economy: Teachers and other public servants who are unable to pay their rent also have less money to spend in local shops.

While he commended the efforts of parents to pay teachers out of their own pockets, al-Haddad cautioned that these initiatives “hinge on the society’s economic powers, which are growing weaker”. Parent-funded payments, he said, “won’t last for long if the war keeps going and prospects of peace dwindle”.

Chipping in for teachers’ salaries is already unaffordable for many Yemenis: In a country that has long been on the brink of famine because families can’t afford food, the majority of parents can’t give what little they have to schooling.

The small number of Yemenis who still have plenty in their bank accounts can likely afford private schooling. Then there are those who appear to be attending public schools based on their parents’ connections: The head teacher of a school in Sana'a, who requested anonymity because of safety concerns, said some families have used their connections with the Houthis to get out of paying their share.

Meanwhile, plenty of parents are stuck somewhere in the middle, doing what they can to get by and to keep their kids learning. However, some are worried they won’t be able to last for much longer. Sahar Mahioub, 38, is a mother of five children in Ibb. Her husband makes around 40,000 rials a month as a day labourer, but is expected to cough up 6,000 a month to keep two of his kids in secondary school.

“I’ve eliminated all unnecessary household spending and cut all frills to help him make these monthly payments,” said Mahioub. “We can’t not help our children achieve their dreams. My eldest wants to be an engineer. He works so hard for it. I just pray we manage to keep affording those payments.”

This article was produced in collaboration with Egab, which connects journalists from the Middle East and North Africa with news organisations worldwide. Edited by Annie Slemrod.