Listen to this article:
MARIB, Yemen

As fighting intensifies around the central Yemeni city of Marib, thousands of people are being forced to flee the violence each week. But for many, this is just the latest upheaval in more than six and a half long years of war.

Sixty-five-year-old Salih al-Asoudi and his 14-member family have lived in three different camps since the early days of the war in 2015, when the conflict between Houthi rebels and the Yemeni government (backed by a Saudi Arabia and United Arab Emirates-led coalition) reached their hometown of Sirwah, in the western part of Marib province.

“We used to live in a big house that I built myself. It took me two years to build it. We ended up living in it for only three years, until the war turned us homeless,” he told The New Humanitarian from al-Sumayya camp, east of Marib city, where the family is now sheltering. “We move from one camp to the other.”

Al-Asoudi’s story is all too familiar to Yemenis, who have been plagued by violence, displacement, and hunger since war broke out in March 2015.

Accurate statistics are hard to come by in all of Yemen, but the UN’s migration agency, IOM, said in a Wednesday statement that 45,000 people have been forcibly displaced by the conflict around Marib since the beginning of September, shortly after a Houthi rebel offensive on the government-held city intensified. The figure includes 15,000 people in November alone. The government’s Executive Unit for Internally Displaced Persons puts the total number at more than 93,000. 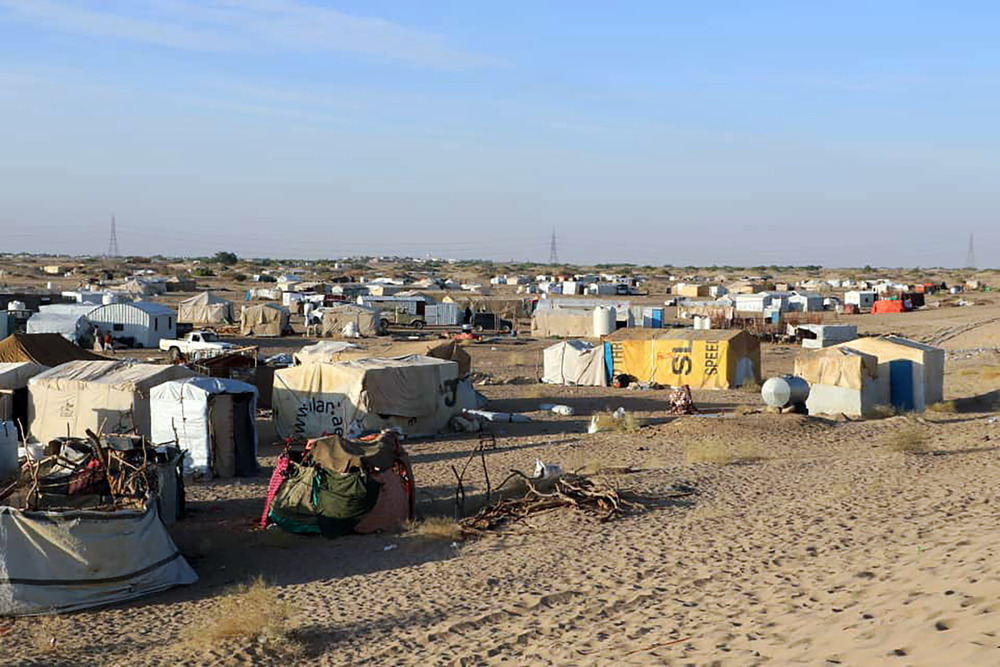 Mohamed Ghazi/TNH
Al-Asoudi and thousands of others took refuge in Marib’s al-Sumayya camp in the wake of the latest surge in violence between Houthis and government forces.

Elsewhere, in the western province of Hodeidah, around 6,000 people have been uprooted from their homes over the past weeks as the government pulled its troops out, allowing the Houthis to move in.

These movements are part of a wider picture of a war that has left, by the UN’s estimation, more than four million people displaced across the country. Like al-Asoudi, most of them have been away from home for more than two years, and IOM says many have already had to flee multiple times.

Displacement makes getting or keeping a job even more difficult than it would otherwise be, in a country that has been economically decimated. It makes it hard for children to stay in school, and it removes any sense of stability. It also leaves many dependent on aid, although al-Asoudi and other displaced people The New Humanitarian spoke to said that assistance has been hard to come by over the past few years.

Nevertheless, when the warring sides began fighting for control of his hometown, he and his family found themselves caught in the middle, with no option but to run for their lives. “There was shooting and bombs everywhere. We fled, taking all that we could with us,” he recalled. “We couldn’t take everything, but we took our livestock and whatever we could carry.”

After leaving their homes, al-Asoudi’s family, and hundreds like them, settled in an area called al-Sawabin, near Marib’s dam: one of the area’s many resources that – along with natural gas – make it such a key prize for the warring parties.

It was also important for the new arrivals: Several displaced people told The New Humanitarian their first priority was to settle near water, and as close to home as possible so they could return as soon as they felt it was safe to do so.

Little did they know that their first flight was just the first stage in a long cycle of displacement that would go on for years, with no end in sight.

Before the war, al-Asoudi made his living as a livestock herder, an income that was mostly cut off when he had to leave home. Some of the animals he managed to bring with him have died, and he was originally hopeful that the government or aid organisations would step in to help.

That was not the case. “Our numbers kept increasing. Thousands of families settled… on the banks of the Marib dam,” he said. “We had nothing but water.”

Al-Sawabin was the first of more than 161 camps in Marib province, according to the Yemeni government. The UN and most international aid groups estimate that around one million people have fled to Marib over the course of the war; the government puts the number closer to two million.

Some left because of violence, as bombs fell and front lines shifted. Others left Houthi-controlled areas when the group began arresting its opponents, said Fahmi al-Zubairi, who is based in Marib and works for the government’s human rights bureau.

As the numbers of displaced increased, so did disappointment in the humanitarian relief effort. 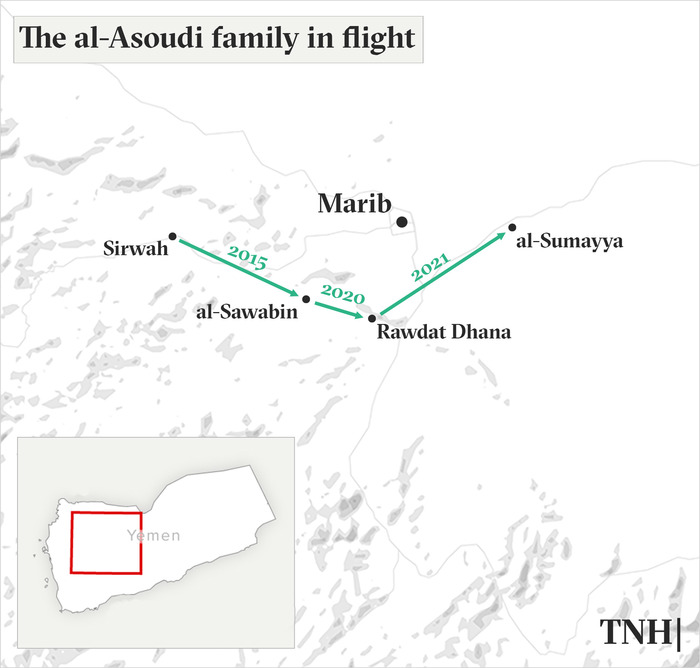 “The aid organisations are absent here. No one even tried to visit us,” said al-Asoudi. “But we made do with just being safe, and tried to start a new life, despite the suffering caused by being away from home.”

According to Salem Sai’d, director of local NGO Human Access, “the amount of aid does not match the large number of IDPs.”

But Saleh Alzaghari, a spokesperson for the UN’s emergency aid coordination body, OCHA, in Yemen, pushed back against accusations about low levels of assistance over the past years and now, saying that significant efforts had been made.

“Despite a challenging operating environment, aid agencies have ramped up life-saving assistance” in Marib and nearby provinces, “ensuring that people affected by the most military escalations (which started in September 2021) receive the assistance they need, wherever they are located,” he wrote in an email.

Alzaghari said that around 1,200 families are registered at al-Sumayya, where al-Asoudi lives. He said early emergency assistance had been provided, safe drinking water was being trucked in, and latrines are being built.

Food delivery will begin to new arrivals this week, 445 families have so far received “non-food items and tents”, and aid agencies and NGOs “are working to mobilise additional supplies to assist the other families”, he continued, adding that cash aid to 1,000 families is expected “in the coming weeks”.

Naser al-Doweisha, 76, who also fled Sirwah in 2015, echoed al-Asoudi’s comments about the insufficient support from aid agencies. Their needs have increased as the value of the little money they had left dropped, leaving them much poorer. At the beginning of the war, one US dollar was equivalent to 215 Yemeni rials. Now, the US dollar equals 1,550 Yemeni rials.

“When we first left our houses, we lived in cloth tents. But they couldn’t withstand Marib’s heat for more than a few months.” Al-Doweisha said finding decent new tents took a long time, and most of the help he and others received was in the form of a monthly food basket from the World Food Programme or other aid agencies and NGOs.

Post-2015, the fighting eventually subsided in Marib, with the government taking firm control of most of the province. By 2017, some were even touting it as a boomtown.

But while al-Asoudi’s hometown was peaceful, he couldn’t go back home. He still feared that the Houthis, who were not far away, would consider him an enemy for leaving in the first place – not to mention the fact that landmines had been planted in the area.

Then, in late 2020, Marib became a focal point of conflict once again, with fighting between government forces and the Houthis reaching the banks of the dam. People living in the camps were no longer safe and felt compelled to move again.

This time, al-Asoudi and his family landed up at a camp called Rawdat Dhana on the other side of the dam. Unlike many of the informal settlements where people had been staying before – tents, schools, whatever they could find – Rawdat Dhana was run by the government, and, according to Saif Muthanna, head of the Marib branch of the Executive Unit for Internally Displaced Persons, it at one point hosted nearly 15,500 people.

Living conditions were better there, and Kuwait's International Islamic Charity Organization – together with a local NGO called Al-Ard al-Tayyeba (The Good Land) – began building hundreds of residential units. However, only 250 were completed so far, and in early November, officials were forced to shut down the camp and evacuate its residents.

Camps in the desert

As the bullets and bombs grew closer once again, al-Asoudi and his family headed for a new cluster of camps set up in the desert east of Marib city. They are far from basic services like hospitals or schools, but close to a highway and around 14 unplanned settlements that were already there. Together, the government says they are now home to around 15,000 families.

Both al-Asoudi and al-Doweisha have been in al-Sumayya, one of the desert camps, since February. They have stayed put as the fighting worsens, civilians are killed, and more and more people join the ranks of the displaced.

“We have nothing in these camps. We are leading a primitive life. No toilets; nothing. The only reason all these people are here is to get a sense of safety from being together,” said al-Doweisha. “The Houthis killed us through perpetual displacement, and the government killed us by carelessness and negligence.” 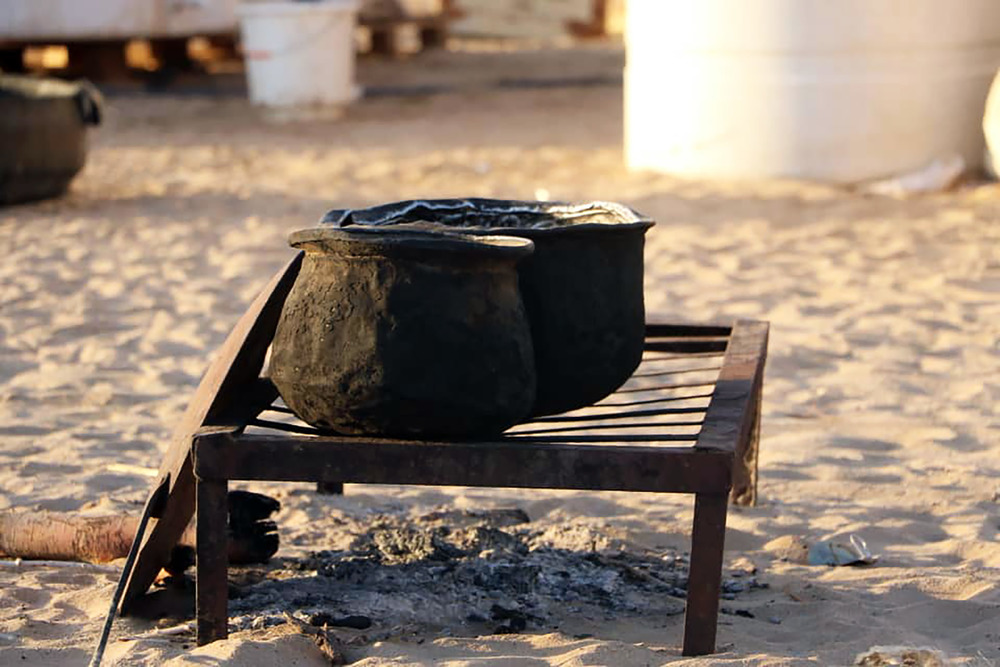 Mohamed Ghazi/TNH
Displaced people in Marib say the bulk of the aid they received over the past years was food, but they needed help with shelter and other necessities.

But for those who’ve been on a continual journey of displacement, humanitarian assistance can only do so much.

Al-Asoudi can’t help but worry about the fate of his children, four of whom are school age but have missed out on an education because of the war. Some IDP camps have makeshift schools, but moving so frequently means those who have to move multiple times often fall behind their peers.

“Will they ever be able to finish their education? Or will war follow them without mercy?” Al-Asoudi wondered.

Abd al-Haq, al-Asoudi’s 28-year-old son, feels any opportunity is already gone. “The war crushed our dreams,” he said. “Wherever we go, once we settle, the war follows us.”

This article was produced in collaboration with Egab, which connects journalists from the Middle East and Africa with news organisations worldwide.