Up and down the length of Chile, people are turning to soup kitchens for their hunger needs as the coronavirus pandemic broadens inequality after lockdown measures shuttered the informal economy for months.

Food insecurity in Chile has risen dramatically over the course of the pandemic, and its impacts have been particularly acute among already marginalised urban populations.

Despite some government subsidies and the efforts of local aid groups, hunger remains: Chile is considered an upper-middle-income country, so the international humanitarian aid sector is unlikely to step in, regardless of inequalities and growing poverty.

Since its return to democracy 30 years ago following a brutal military dictatorship, Chile has been considered a beacon of economic growth and stability in South America – a continent often convulsed by political and social turmoil. “In the midst of this troubled Latin America, our country is a true oasis, with a stable democracy,” Chilean President Sebastián Piñera said in a television interview in October 2019.

Ten days later, the country erupted in mass demonstrations against structural inequality. Protests continued nearly every day for months, as did heavy-handed police crackdowns. The government made some concessions to protesters’ demands – minor increases in the minimum wage and in pension payments – but they weren’t enough to quell decades of building discontent.

Coronavirus pressed pause on the protests in March: The pandemic hit early and hard in the country of roughly 19 million people. With 543,087 cases and 15,131 deaths as of 24 November, Chile has more cases per capita than Italy, and as many deaths per capita as Mexico. 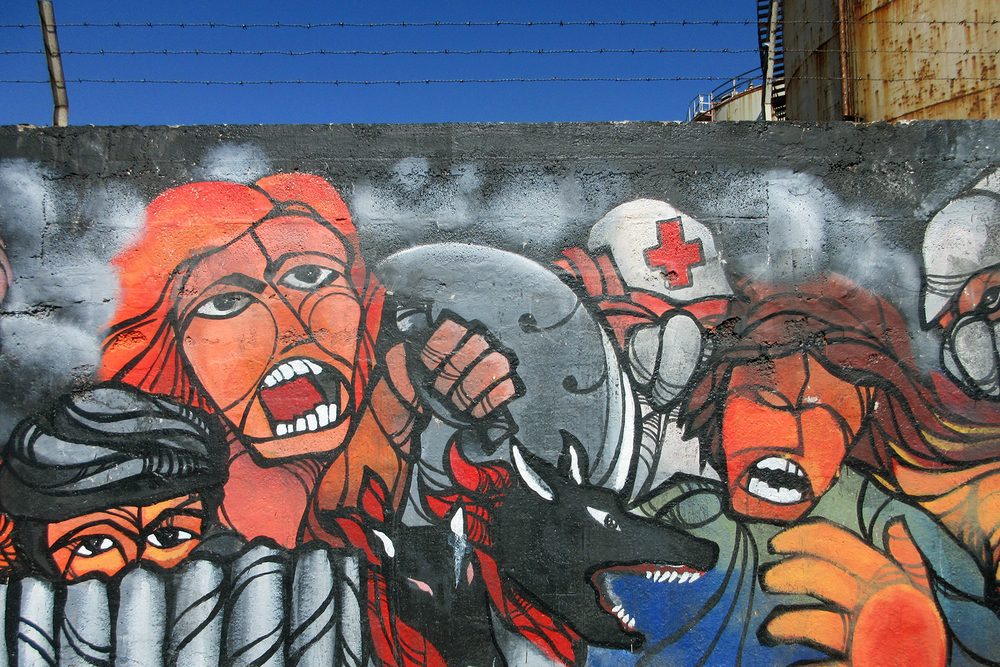 Sandra Cuffe/TNH
A mural in Antofagasta depicts front line demonstrators, protest medics, and a dog that has become a protest icon in Chile.

Both the pandemic and the lockdown measures to contain it have aggravated Chile’s economic crisis, which has been deepening in recent months alongside the political turmoil.

Government subsidy and aid programmes directed at low-income families have been insufficient, and local Chilean communities have set up hundreds of grassroot soup kitchens around the country to help alleviate hunger.

‘Crumbs’ from the government

Marcela Araya carefully ladles the steaming bean and noodle soup into a tupperware container. Another volunteer keeps track of the line-up of pots and containers, and when portions are ready he calls out the names of people waiting outside on a steep street in Antofagasta – a city of more than 360,000 residents stretched out along the Pacific coast, 1,335 kilometres north of the capital, Santiago.

“The government has handed out pure crumbs,” says Araya, a shelf stocker at a local supermarket. “They’re just band-aids, not concrete solutions.”

The grassroots soup kitchens are known in Chile as “ollas comunes” – collective pots. Many of the mutual aid initiatives are extensions of neighbourhood organising that arose alongside the “estallido social” – the explosion of social unrest.

“We were all part of the protests,” Araya tells The New Humanitarian. “This happened thanks to the [protests].”

Like many around the country, the soup kitchen Araya is involved in began small. In April, a few young people began distributing food to the homeless. By the time Antofagasta’s second lockdown – from late June to late September – was underway, an established group was serving 250 lunches four times a week, and a separate outfit filled in the other three days.

“I come every day,” Marco Varela says, as he waits for his lunch in the shade across the street. Varela, a gas fitter, used to be an independent contractor, but when the pandemic really hit, he was left without work, income, or unemployment insurance.

“If it weren’t for the ollas comunes, we might not eat,” he says. 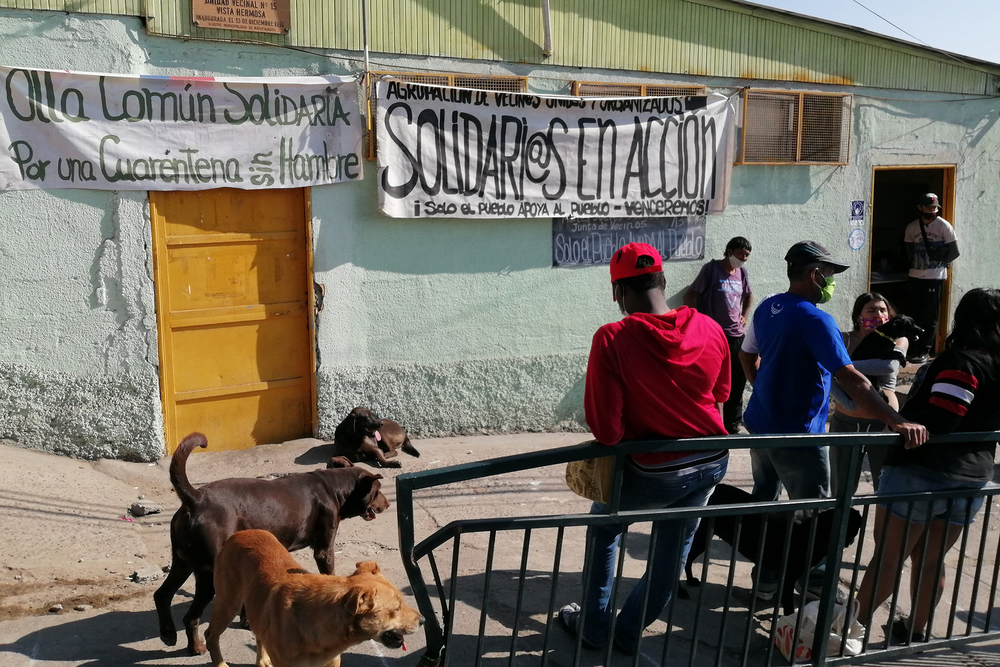 Sandra Cuffe/TNH
Residents wait to be served lunch at a grassroots soup kitchen during lockdown due to the pandemic in Antofagasta, in northern Chile.

Considered an upper-middle-income country by the World Bank, Chile has one of the highest GDPs per capita in Latin America, second in South America only to Uruguay – a high-income country.

But Chile’s GINI index, measuring income inequality, falls behind Argentina and Peru, also upper-middle-income countries, and even Bolivia, a lower-middle-income country. Latin America is the most unequal region in the world, and the classification that takes countries like Chile out of the running for international assistance doesn’t take that into account.

Some multilateral institutions and international NGOs hope to change that, and one of them is the UN’s Economic Commission for Latin America and the Caribbean, or ECLAC.

“ECLAC has insisted a lot in not looking only at per capita income as an indicator to determine international cooperation,” said Simone Cecchini, who heads ECLAC’s Social Development Division. “ECLAC has discussed a structural gap approach to look beyond the middle income of countries, as it is so poorly distributed, and to look at the gap within.”

Hunger has risen sharply in Chile. A 2017 government study revealed 13.1 percent of households suffered from food insecurity. Over the course of the pandemic, this has shot up to 19.4 percent, according to a Ministry of Social Development study released in September. Recent government statistics show 59.4 percent of households have suffered from lower income during the pandemic.

In Chile, some of the worst impacts of the pandemic, including food insecurity, are being experienced by already marginalised, largely urban populations: the homeless, migrant labourers, and residents of large informal settlements on the fringes of cities and towns. Some 43,000 families live in more than 700 such settlements, known as campamentos, where many lack basic services like electricity and running water. The settlements are also home to some of the more than one million migrants who have relocated to Chile since 2014, mostly from Bolivia, Colombia, and Peru.

In many cases, residents of informal settlements, migrants, and those who are homeless set up their own grassroots soup kitchens, sometimes with the support of local NGOs.

Faith-based groups have also been providing relief and aid for years, and some transnational corporations with operations in Chile have increased aid donations for residents of informal settlements, at times teaming up with housing and shelter NGOs.

That approach has become all the more relevant during the pandemic, when Chile’s unemployment surpassed 14 percent before beginning to wane. ECLAC estimated the poverty level rose from 9.8 percent to 15.5 percent, and extreme poverty from 1.4 percent to 3.4 percent, Cecchini said, adding that the already precarious middle class is more vulnerable now.

“The pandemic comes, and it is literally a disaster,” Cecchini told TNH. “In that sense, when there is a disaster, I think solidarity is needed independently of whether there is a certain level of income per capita in a country. We see it all the time: When there is an earthquake in a country, no matter how rich it may be, other countries will help.”

Regardless of internal levels of inequality, the big international aid institutions generally don’t provide relief in Chile or other middle-income countries.

That’s unlikely to change, according to Patrick Saez, a senior policy fellow with the Center for Global Development, a think tank based in Washington, DC.

“When there is an earthquake in a country, no matter how rich it may be, other countries will help.”

"The humanitarian system is set up for emergency response, even though it ends up dealing with protracted crises," he told TNH. And while crises do include pandemics – and the UN and international aid machinery is responding to this one – Saez said such aid is "usually in countries where the government or the state in general is either unable to address those needs, or unwilling because there's a conflict, or because it's discriminating against a population.”

The government maintains it is doing what it can, through subsidies, expanding eligibility for unemployment benefit, and some food assistance. Chile’s Agency for International Development Cooperation largely focuses on providing aid to low-income countries. The agency did not respond to TNH's questions in time for publication.

Magdalena Sepúlveda, a former UN rapporteur on extreme poverty and human rights, said several international NGO projects in the Andean region used to operate in Chile but then withdrew, focusing efforts instead on Bolivia, Colombia, and other countries.

Sepúlveda was hopeful Chileans may be able to address some of the issues underlying the growing poverty and inequality by writing a new constitution that would radically reorient the country’s economic model and social spending priorities.

A key early government concession to protester demands was a plebiscite on the issue. On 25 October, 78 percent of Chileans voted in favour of a new constitution and chose an all-citizen convention to write it. Elections will be held in April 2021 for citizen representatives, half of whom must be women. 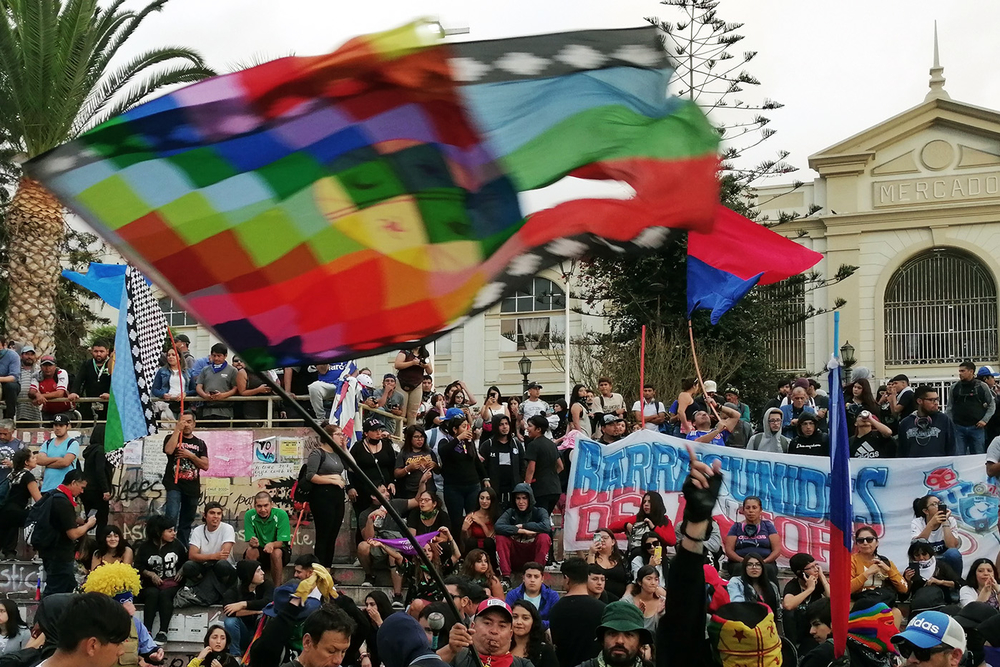 “It is totally historic,” said Sepúlveda, whose organisation is working with Chilean housing rights groups to develop proposals on the issue ahead of the convention.

Rodrigo Ignacio Urzúa has lived on the streets for the past 16 years, following a struggle with drug addiction. During the pandemic, he sometimes attends a day programme run by a faith-based group and also works as an informal street parking attendant, but he always shows up in a little park on Sundays for a soup kitchen exclusively for the homeless.

“We know each other through music,” Urzúa says, flashing the sign of the horns.

Tattoo artist Marco Epul started the weekly soup kitchen during the pandemic, but it wasn’t entirely for the first time. The vocalist in a heavy metal band – along with other musicians and fans from the local metal, hardcore, and rap scenes – had organised occasional meals before, for fans and others living in the streets.

“If we don’t do this, nobody will,” Epul says. “They are the most forgotten people.”

Epul’s inspiration was his grandmother, Ruth Godoy Pozo. A neighbourhood organiser, communist, and human rights activist during the 1973-1990 dictatorship, she set up a grassroots soup kitchen the last time they sprang up all over Chile, during a recession in the early 1980s. She has now passed away, but Epul plans to continue the initiative indefinitely, as do many of the other olla común organisers.

“Once the pandemic is over, this will continue,” Epul says.