They have ambushed civilians and soldiers in remote corners of the Democratic Republic of Congo, pillaged markets in South Sudan, and forced villagers to porter stolen goods through forests in Central African Republic. And that was just over the course of a few weeks.

The once-fearsome Lord’s Resistance Army has been reduced to a dwindling rump of fighters hiding out in jungle camps across vast swathes of territory in Central Africa. But a spate of recent attacks has once again demonstrated its capacity to inflict harm on long-suffering communities.

At least 55 attacks and 163 abductions have been recorded over the past year in the three countries where the group operates, according to data from Invisible Children, an NGO focused on the LRA.

The number of violent incidents is down from the previous 12 months – and far less than a decade ago – but thousands of people have still been forced to flee their homes since April in LRA-affected parts of northern Congo.

Joseph Kony, who founded the guerrilla group in 1987, has largely abandoned his goal of overthrowing Uganda’s President Yoweri Museveni. He has also lost control of many of his battle-drained fighters – now split between different autonomous factions.

Efforts to hunt down Kony by US Special Forces and an African Union counter-LRA task force have wound down. And UN peacekeepers in Congo have packed up and left the area where LRA groups operate, citing budget cuts and bigger threats.

The LRA has not staged a comeback as some had expected amid the drawdown, but it still casts a long shadow over affected communities, according to Robert Batikote, the deputy director of SAIPED, a civil society group based in Congo’s Dungu territory. 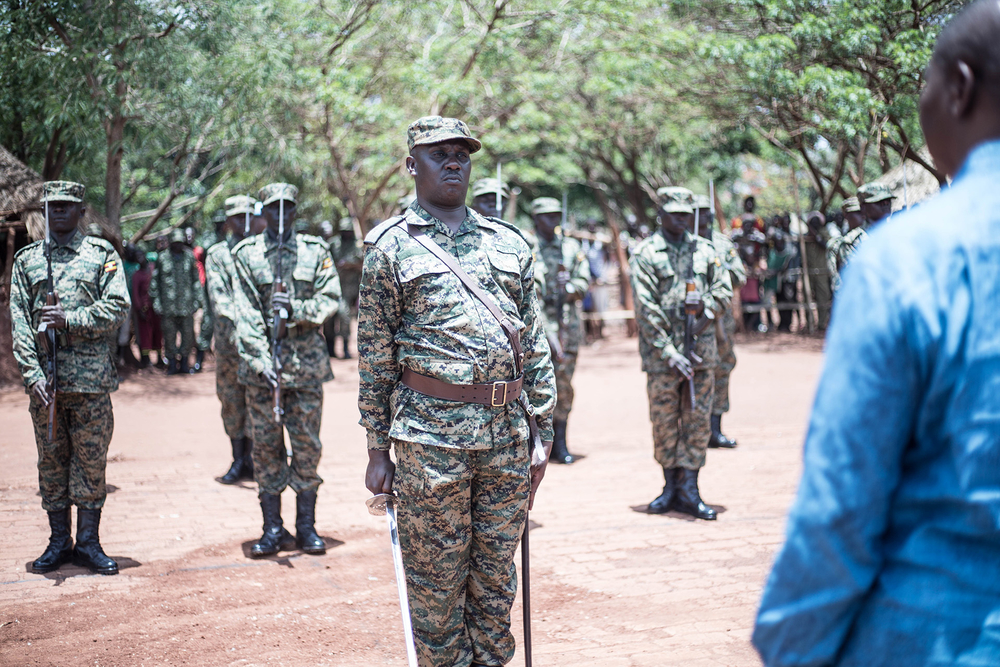 Philip Kleinfeld/TNH
Ugandan soldiers that were part of an African Union counter-LRA task force stand to attention at a base in Central African Republic, in 2017.

A history of abuse and atrocity

During the 1990s and 2000s, more than 100,000 people were killed and tens of thousands of children conscripted by the LRA, who claimed to be protecting northern Uganda’s ethnic Acholi community against Museveni’s regime. A self-styled spirit medium, Kony also hoped to establish a government based on the biblical Ten Commandments.

By 2005, the group had left northern Uganda for jungle bases in neighbouring countries. After peace talks with Kampala broke down in 2008, a regional military operation was launched against the rebels, who responded by slaughtering hundreds of civilians – their last major atrocity.

Read more → On the trail of the LRA

Infighting weakened the group and violence fell as a Ugandan amnesty law encouraged thousands of defections. Combatants who recently left the group say Kony now sees the LRA – thought to number little over 100 – more like a band of refugees than rebels. Where supplies once came from former patron Sudan, members now hawk honey at local markets.

“At this point, they are primarily concerned with their own safety, their own survival,” said Paul Ronan, the director of research and policy at Invisible Children.

Claiming the group had been neutralised – and frustrated by a lack of support – Uganda withdrew from the African Union task force in 2017, while a Barack Obama-era US operation also ended at the same time, amid apprehension from Donald Trump’s transition team. In the end, just a handful of commanders were captured or killed in the often-criticised military campaign.

In Congo, the reduced risk led peacekeepers from a UN mission known by its French acronym, MONUSCO, to close down a small base and focus efforts elsewhere, as it navigates budget cuts and plots an exit strategy from the country after 20 years on the ground.

Without military pressure some wondered whether the LRA would fade away or rebound. “The answer is perhaps a bit of both,” said Kristof Titeca, a professor at the University of Antwerp and an expert on the LRA. “They are disappearing, but they still have the possibility to be a nuisance to this wide territory.”

Recent months have been a case in point. In March, according to Invisible Children’s Crisis Tracker, the LRA was responsible for the abduction of 50 civilians. Most were used as short-term porters for looted goods, but 16 people, including four children, were taken into captivity in Congo’s Bas-Uélé and Haut-Uélé provinces.

In April and May, nine more youths were abducted and 100 people temporarily detained and robbed in another wave of attacks and ambushes on villages and along roads in CAR, Congo, and South Sudan. Three Congolese soldiers died in clashes with the rebels, and one boy was killed.

“They [are] internally displaced with no food security, with nothing to help them.”

Ronan, of Invisible Children, cited two possible reasons for the spike in violence: low-level defections earlier in the year pushing LRA commanders to find new combatants; and the end of the dry season pushing rebels to loot food and supplies before rains hinder movement.

The new attacks have had humanitarian consequences, particularly in Congo, where hundreds crossed the border into South Sudan as of July, according to the UN’s refugee agency, and thousands more fled to nearby villages in an area where few aid groups are present.

“They [are] internally displaced with no food security, with nothing to help them,” said SAIPED’s director, Ernest Sugule. 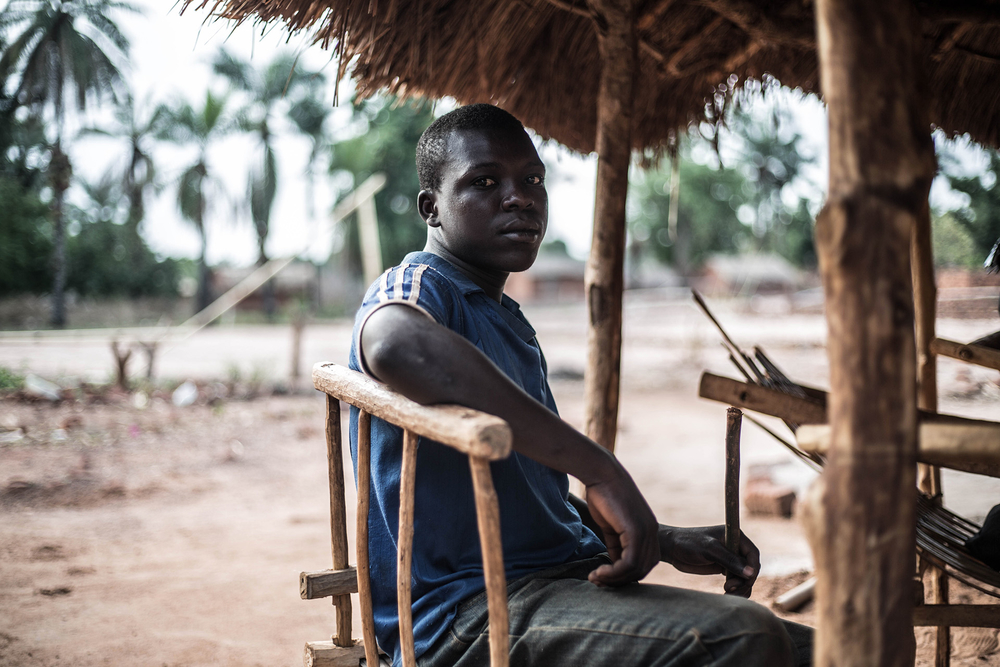 Philip Kleinfeld/TNH
A 20-year-old who escaped from the LRA in 2017 after being held captive in Congo for a year.

Almost 60 years old, Kony – wanted by the International Criminal Court for war crimes and crimes against humanity – is widely believed to be hiding out in the disputed Kafia Kingi enclave between Sudan and South Sudan.

Though LRA watchers say he is unlikely to surrender, other combatants would likely rather not spend their final years robbing farmers for food and sitting around in bush camps with no clear purpose.

In the past, anti-LRA groups encouraged rebels to defect by broadcasting “Come Home” messages over radio channels, via loudspeakers in helicopters, and on leaflets tossed out of planes. Specific combatants were targeted with photos and recordings from family members and recent escapees.

Researchers say the low-cost method was effective in inspiring mass LRA defections, but donors stopped funding defection messaging programmes when the Kony hunt ended and the rebels have mostly opted to stay put since – often because they fear retaliation and are uncertain whether they would face prosecution back home.

“When groups… like the LRA [are] reduced, then the national police and the national army need to kick in to stabilise the leftovers,” he said.

But the LRA has long been only of peripheral interest to the Congolese government, and residents say the army – often a greater threat to civilians in the country than rebels themselves – is doing little to help.

“[The LRA] are free to do anything they want,” said Sugule. “They are free to build barricades and loot for hours. No security forces pursue them”.

The system has been in place for nearly a decade in some places and means residents can travel to their farms together when an LRA presence is detected, or hide in designated safe spots if the rebels attack.

In some parts of northern Congo, fear of the LRA still engulfs daily life.

Residents who travel on the roads are often afraid of being ambushed, according to SAIPED’s Batikote, and if one person at night starts crying or shouting, many assume the rebels have come back.