In a healthcare centre in the Madagascan capital of Antananarivo nine-year-old Faneva inches his arm forward. The nurse disinfects his skin before inserting the needle. A few seconds later, it’s all over. The young boy smiles in relief.

This is the front line of efforts to combat Madagascar’s deadliest measles outbreak in living memory. The virus has killed more than 1,100 people – mostly children – since September, and infected nearly 100,000 more all across this large island nation.

The outbreak is raging, at least in part, due to low immunisation rates. But unlike in more developed countries where parents refuse to vaccinate their children because of so-called “vaccine hesitancy”, the challenge in Madagascar is one of affordability and accessibility.

Despite measures put in place to tackle the spread of measles, the response in Madagascar has been complicated by the high cost and logistical challenge of transporting the vaccine to health centres in remote districts, and storing it long enough at the required low temperature.

Madagascar is among Africa’s poorest countries; 75 percent of its population of 26 million live on less than $2 per day. It faces a host of humanitarian challenges, including El Niño-induced droughts that fuel food insecurity; cyclones that displace tens of thousands annually; and severe health problems such as seasonal plague, chronic malnutrition, and now measles.

One dose, or two?

Faneva received his first dose of the measles vaccine when he was just nine months old, his father, Fanilo Andrianarivony, told IRIN. But his school now requires everyone who is nine years old or younger to be vaccinated with a second dose. In Faneva’s class at school, 15 pupils caught the virus between November and December, despite medical reports indicating they had been vaccinated as babies, their teacher said.

Although a double dose of the vaccine – one at six to eight months, and a booster at least a month later – is recommended by international health bodies, the second dose is not yet part of the routine immunisation schedule recommended by Madagascar’s health ministry. As a result, very few parents take their children to receive a booster dose.

"A single dose is only half effective,” said Jean-Benoît Manhes, the deputy representative for UNICEF in Madagascar. “To become 85 percent effective, a second dose is needed."

Even with the double dose, there is still a 15 percent risk of contagion, Manhes said, explaining that “for individual coverage to work, you need mass immunity, up to 95 percent”.

Reaching the required level of immunity is a huge challenge in Madagascar, where measles vaccination coverage – children who have received at least one dose of the vaccine – is barely 60 percent, according to the World Health Organisation. This low coverage rate has been one of the main drivers of the current outbreak, the WHO said.

Poor health infrastructure and low levels of awareness are factors that have led to an increase in measles cases globally, not just in Madagascar, according to UNICEF. At the same time, complacency and vaccine hesitancy have caused the virus to re-emerge and spread in more developed countries that had been declared measles-free.

“Global cases of measles are surging to alarmingly high levels,” UNICEF warned this month, with 10 countries accounting for over 74 percent of the total increase in 2018.

"Almost all of these cases are preventable," UNICEF executive director Henrietta Fore said in a statement. "Measles may be the disease, but, all too often, the real infection is misinformation, mistrust, and complacency. We must do more to accurately inform every parent, to help us safely vaccinate every child."

In Madagascar, UNICEF, the WHO, and the health ministry launched an immunisation campaign to target all 114 districts in the first quarter of this year.

More than two million children, including Faneva, were immunised in January, and 1.4 million children were vaccinated in February. But the campaigns only reached 25 and 22 districts respectively, meaning another 67 districts still have to wait until the end of March or the beginning of April.

"We are asking the authorities to send vaccines as quickly as possible to our region," a nurse working in a health centre in one of the yet-to-be-reached southern districts told IRIN, preferring her name not be used.

The nurse said that in districts like hers the lack of vaccines means they can only vaccinate children under nine months old with the first routine dose. "It's heartbreaking to see the desperation of parents, but we can’t do anything until [more] vaccines arrive,” she said.

To immunise all the nearly eight million children from nine months to nine years old, Madagascar needed $7 million; however, all the necessary funds were only collected this month. And even now, financial and logistical obstacles remain.

"Ideally, a single national campaign at the same time for all the districts would have been perfect to interrupt the outbreak," UNICEF’s Manhes said.

Help from the sun

Sourcing the number of vaccines needed was a major challenge, and getting eight million doses at one time was “very complicated”, Manhes said.

"Very few laboratories are producing the measles vaccine, and orders are still planned five years in advance," he explained. UNICEF had to negotiate with countries like the Democratic Republic of Congo, Uganda, and Yemen to get all the vaccines it needed.

Even when stocks are available, disseminating the vaccines and syringes across Madagascar is no easy task due to the vast size of the island – roughly the same size as France or Spain but with notoriously tricky terrain and poor roads, especially in the more remote regions.

In mid-February, the WHO said there was a gap of $3 million in the budget for the third and final vaccination campaign. But at the beginning of March, the Malagasy authorities, with the support of their technical and financial partners, said it would now be possible.

On 5 March, UNICEF and the government ​​signed an agreement to supply 500 health centres in remote parts of the country with $4.5 million worth of solar refrigerators, allowing them to store the vaccines and cut back on shortages in areas where there is no electricity.

"Health centres will be able to offer daily immunisation services when they are equipped with solar refrigerators," said Julio Rakotonirina, a professor of epidemiology who is Madagascar’s minister of public health. 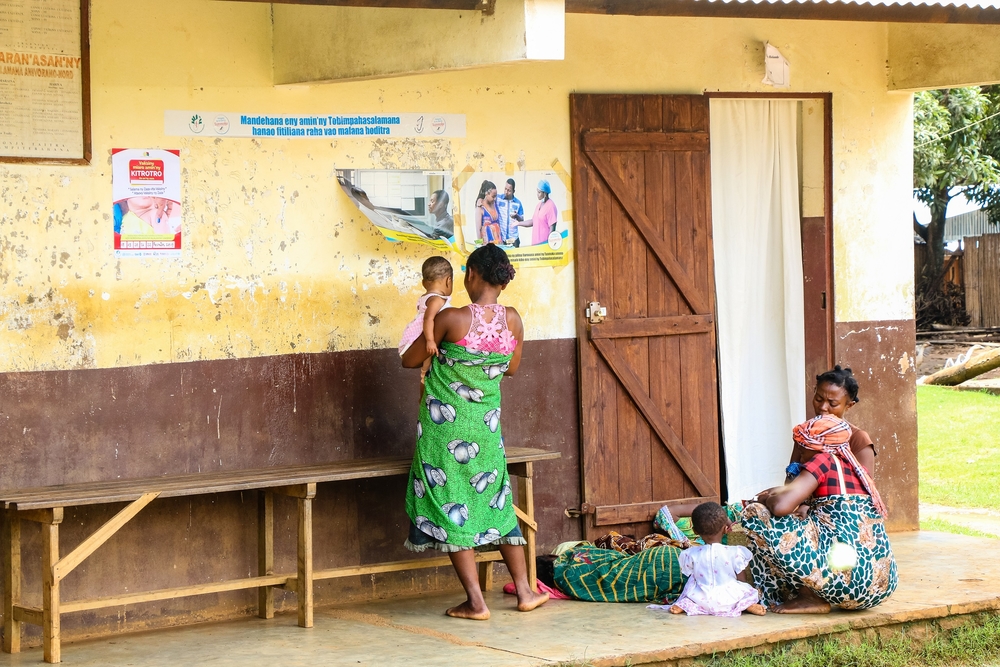 Iloniaina Alain/IRIN
Mothers wait for their children to be vaccinated at a basic health centre in northern Madagascar.

Manhes explained how difficult it is in remote, rural regions far from the capital. "It can happen that parents come to the [health] centre with their children and there is no vaccine,” he said. “When they come back a week later, the centre is closed because the staff went to get their pay. A week later, they come back but the vaccine is out of date or no longer effective because the cold chain has broken down. Do you think they will come back a fourth time, especially if their village is a few hours walk from this centre?”

For Manhes, these broader failings are driving the upsurge in epidemics like the current one. "It is important that Madagascar adopts a sustainable and strengthened health system," he said.

"I did not expect that not being vaccinated could kill him”

Other health and humanitarian concerns in Madagascar also risk worsening the effects of the epidemic. With 47 percent of Malagasy children under age five facing chronic malnutrition, there are risks of serious complications and death if they contract measles, the UN’s emergency aid coordination body, OCHA, said.

"Malnutrition that strikes one child in two, also makes the measles bed in Madagascar,” said the WHO representative in Madagascar, Dr. Charlotte Faty Ndiaye.

While families with children unprotected from the virus live in fear, others, like the parents of four-year-old Rado, mourn the outbreak’s latest victims.

"He had coughed a lot and had a very high fever," Rado’s mother, Haingo Nomenjanahary, recalled of the days when her son first became ill.

She took him to the health centre only when rashes developed on his face and body. "We were rushed to the hospital, but the doctors did not save my son," she said.

Rado had never been vaccinated against measles. "He had another [different] vaccine at six months, but when he was nine months old, I had no time to take him to the basic health centre,” Nomenjanahary said. "I did not expect that not being vaccinated could kill him.”

Rado’s one-year-old sister, Ravaka, is luckier than her brother. Nomenjanahary now knows that to protect her youngest daughter she has to take her to be vaccinated, and a few weeks after her son died, she did just that.

Ravaka received her first dose of the measles vaccine at 11 months. "I hope that now she is immune to this danger," her mother said. "And if God still gives me children, I'll take them to the basic health centre to be vaccinated," she promised.