Read about what we achieved.
CARACAS

Smiles are more numerous here in Caracas than they have been for years. When I lived here last winter, apathy was widespread. President Nicolás Maduro’s soldiers had shot live rounds at protesters throughout the spring, quelling their courage and splitting the opposition. No one had the stomach for further protests, because what did it matter? Now, hope is on the rise again.

Not even Juan Guaidó's wife knows where he is sleeping. Since the opposition leader proclaimed himself the legitimate president of Venezuela on 23 January – in the midst of street protests against Maduro’s regime – he has had to be cautious. He only appears in public at carefully planned events, people close to him say.

From a podium on Saturday in Caracas shopping and leisure district Las Mercedes, he shares his plans with a crowd wrapped in flags and full of new hope. He will only serve as president until free elections can be held. His support from most of the world's democracies will make the army realise it’s time to abandon Maduro (only foot-soldiers at home and senior military people posted abroad have so far done so). A promise of amnesty to those who desert their posts will get the top brass to reconsider, says Guaidó, waving papers containing an amnesty law.

This offer likely isn’t enough to tempt officials who make a lot of money from corruption, cocaine, food price speculation, and the artificially high exchange rate to change sides. But perhaps US sabre-rattling, the freezing of bank accounts, and a hunger crisis so bad even soldiers rummage through trash cans for food can get enough of the military to back Guaidó? 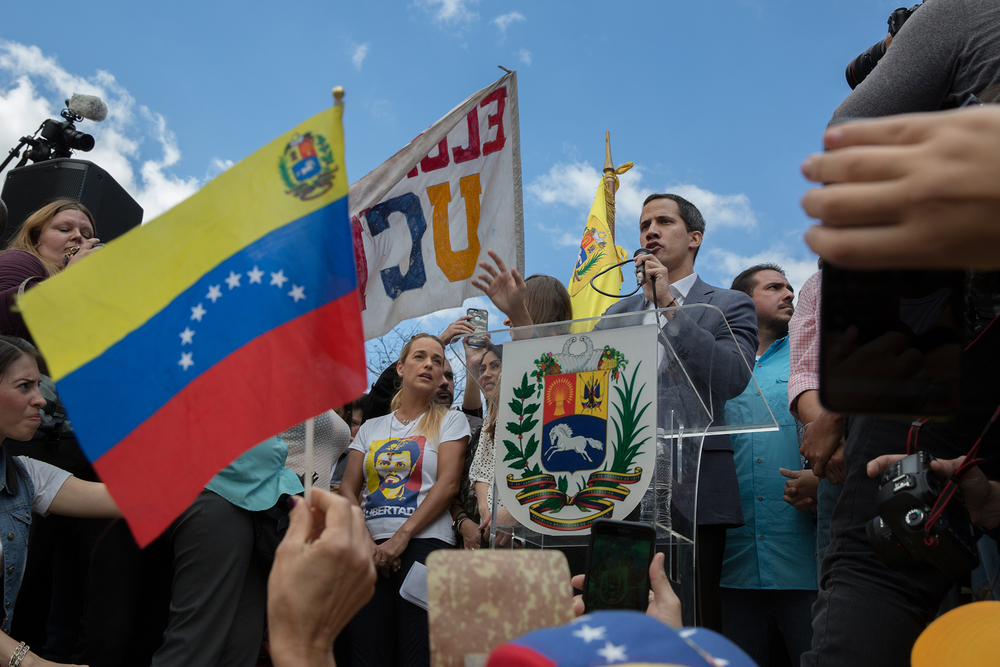 The humanitarian crisis is now so bad that previously eradicated diseases like diphtheria and measles have returned, while the healthcare system, like the economy, is in a state of complete collapse. Maduro’s regime denies the crisis and refuses to accept most international aid, although the United States now says it will be sending aid at Guaidó’s request.

"Who is President?” the crowd chants. “Guaidó!” These scenes have been proliferating across the country. A few weeks ago, many protesters didn’t even know who Guaidó was. Here in Las Mercedes, they praise him as a national father figure, even though he is only 35 years old and his speech is quite forgettable. At least he's not Maduro. At least he has been able to unify the opposition. I stand a few metres from him; he looks calm and humble. He looks like someone who has had eight hours of solid sleep. Looks might be deceiving.

"Venezuela will be free," says Gregory Sanabria with a smile. The 24-year-old theology student was released this summer after three years, eight months, and 26 days in the intelligence service SEBIN's snail-shaped torture palace, where grass grows in the crevices of the concrete and political prisoners disappear. Sanabria was accused of "participation in conspiracy", but his case never made it to trial. His eyes are still red, his forehead scarred by beatings, and the bones in his nose are broken. But now he is back on the streets – and an optimist again: "It’s different this time. Now, the world is on our side."

Even while we speak, Guaidó has gained the support of several Western and Latin American countries. Most of the world's democracies are now backing him, while Russia and China – along with Cuba, North Korea, Iran, and Turkey – support Maduro.

"It's now or never," says Sanabria, nervously smoking a cigarette.

Venezuela may have two presidents, but only one of them, Maduro, has an army. If Guaidó is to have power, his supporters in poorer neighborhoods will have to continue facing down the military.

I drive around between these areas on the back of a motorbike to sense the mood. You can drive for hours in Caracas and only see the sadness of slums: piles of burning garbage, mangy mutts, long queues in front of half-empty shops. We drive through red lights to avoid being mugged.

Everywhere, anger towards Maduro is growing, but so is the brutality of his security forces. Some 850 people were arrested last week and at least 40 have been killed – many in their homes by the new FAES special forces. When ordinary soldiers refuse to kill, Maduro sends in FAES to do the job instead.

"This shit has to end," rages Victor Marquez behind the Gato Negro metro stop, where Maduro comes to vote at elections. Marquez is a father of four. His minimum wage no longer allows him to buy enough food to feed his children. He lives in Catia in the western part of Caracas – once a Chavista stronghold, now a hive of rebellion.

The riots began in earnest on 21 January, in Cotiza not far from here. Soldiers from the National Guard robbed an armory and seized a military barracks. When Maduro's forces moved in, the local residents took to the streets. Thrown bottles were met by live rounds, and eventually the rebel soldiers were taken away.

But over the next few days, the rebellion in the slums just grew. 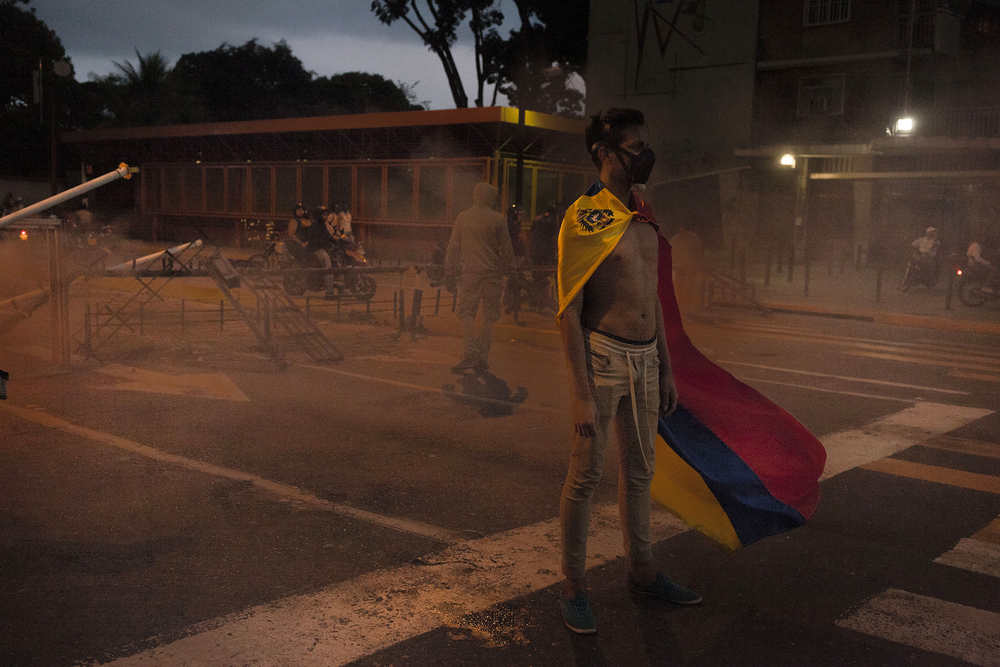 On 23 January, the sound of shooting continued throughout the night in the José Félix Ribas neighbourhood, says a woman who is afraid to let her name be used.

"It was ugly. Pow-Pow-Pow. It kept going, and garbage containers were set on fire in the middle of the street," she says, adding that she had to take a long detour to get home by bus.

Maduro's enemies are in the majority, but his friends are better organised. Several are standing this Saturday afternoon in front of the peach-colored walls of the government palace of Miraflores, shouting "Chávez vive, viva Maduro", waving red flags, and listening to llanera folk music.

"When Venezuela speaks, the cowards shake," a woman with very red lipstick sings.

A woman from the poor neighbourhood of San Juan admits she is here because she received a threat: show up or lose the CLAP – the term for the boxes of food the government distributes free of charge to the country's poorest people.

But 52-year-old Sixto Álvares – a Christian wearing a Cardenales de Lara baseball jersey and ripped jeans – is an ardent Maduro supporter. He calls Guaidó a coup instigator and a lackey for the empire, i.e. the United States. So, Guaidó should be jailed? I ask. "He’s just passed the age of responsibility, right?" the answer comes back.

We are interrupted by a guard in civilian clothes with a moustache and walkie-talkie. I am not allowed to be here, he informs me, demanding to see my passport. I hand him my press credentials. “Passport,” he insists. "Wait here, and I'll get it to you right away," I answer, hurrying around a corner to get away. On Tuesday and Wednesday alone, 11 journalists were imprisoned or deported in Venezuela; only two have been released since. Like many others, I was also detained for hours at the airport when I arrived.

To get an idea just how much Maduro’s power is waning, I drive out to the infamous slum of 23 de Enero. It was named after 23 January, 1958 – the day the dictator Marcos Pérez Jiménez was overthrown. It is probably the most famous stronghold of the Chavistas. Here, Hugo Chávez lies buried. Here, the colectivos, motorcycle militias faithful to the government, patrol the streets with long rifles and black Sandoval helmets.

And here, also, contingents of Cubans are in charge of medical care, social services and, not least, surveillance. They make lists of anti-Maduro protesters. These lists are used by the colectivos when they go door to door to tell Maduro’s opponents they are being punished and will no longer receive the free food boxes from the government.

The Chavistas have the power, but have they lost the people?

"It has been many years since a majority of us actually supported them. Now, we just pretend," says 60-year-old José Ochoa, who is wearing a net undershirt and has a tribal tattoo, and a grandson on his arm. He is a secretary in one of the local Chavista councils and works in the Ministry of Education; on paper, at least, a true Chavista.

But this loyalty is now a mirage. He claims that 40 of the 52 council members, like him, simply fake loyalty to ensure benefits for themselves and their loved ones. Nothing new, perhaps. But it is new and surprising that many are now so angry that they are happy to be quoted. Before, they used to sneak into neighbouring opposition areas to demonstrate. Now, they’re ready to do it right here, in the Chavista stronghold where they live.

We talk together in the yard while two stoned men sell cannabis and some happy children chase a football. Here, at noon, the colectivos are joyfully absent.

"We've lost our fear," says 30-year-old Adriana Rodriguez. On 23 January, she and most of her apartment complex knocked on pots and pans and demanded Maduro’s resignation. The army and police had withdrawn from several of their posts in the neighbourhood and left the riot control to the colectivos, who stood on the rooftop of the 12-storey concrete building and aimed their guns at anyone who ventured into the yard.

"They always do that," says Rodriguez. "But, this time, we defied them. We shouted "mamahuevo" (cocksuckers) and "we’ll kill you when your kingdom collapses" at them. They seemed to be afraid. So am I."