This article is part of our in-depth coverage. Read more like this...
NAYAPARA/Bangladesh

Denied citizenship and driven out of Myanmar, multiple generations of Rohingya families have found a reluctant home in Bangladesh’s crowded refugee camps. But only recently have they found a voice.

Alarmed by aborted plans to repatriate refugees to an uncertain fate in Myanmar, and by what they see as a lack of meaningful consultation from the authorities and aid groups, Rohingya activists are beginning to demand a greater say on issues that impact them.

This nascent advocacy was evident in the camps this week when groups of Rohingya announced a three-day strike to protest new identity cards issued by the Bangladesh authorities and the UN’s refugee agency, UNHCR.

Some Rohingya fear their personal data could be used to enable forced returns to Myanmar; the UNHCR says the system isn’t linked to repatriation, but needed to organise and provide aid to the more than 900,000 Rohingya refugees now living in Bangladesh.

Growing grassroots activism among the Rohingya – including an informal network of self-funded schools to teach newcomers – is driven by a generation of refugees who came of age in the camps as well as by more recent arrivals who graduated from school before fleeing Myanmar.

They’re hoping to represent the larger Rohingya refugee community on everything from education and aid policy to human rights and justice for last year’s military purge in Myanmar’s northern Rakhine State, which sent more than 700,000 new refugees pouring into the camps.

Mohib Ullah was one of the organisers of this week’s protests. He heads the Arakan Rohingya Society for Peace and Human Rights, or ARSPH, which has become one of the most prominent advocacy groups within the camps.

“If we want to solve our problems, we should do it ourselves. The international community are just helpers,” he said. “The [Rohingya] community has more trust and belief in their own organisations, their own community, their own family.” 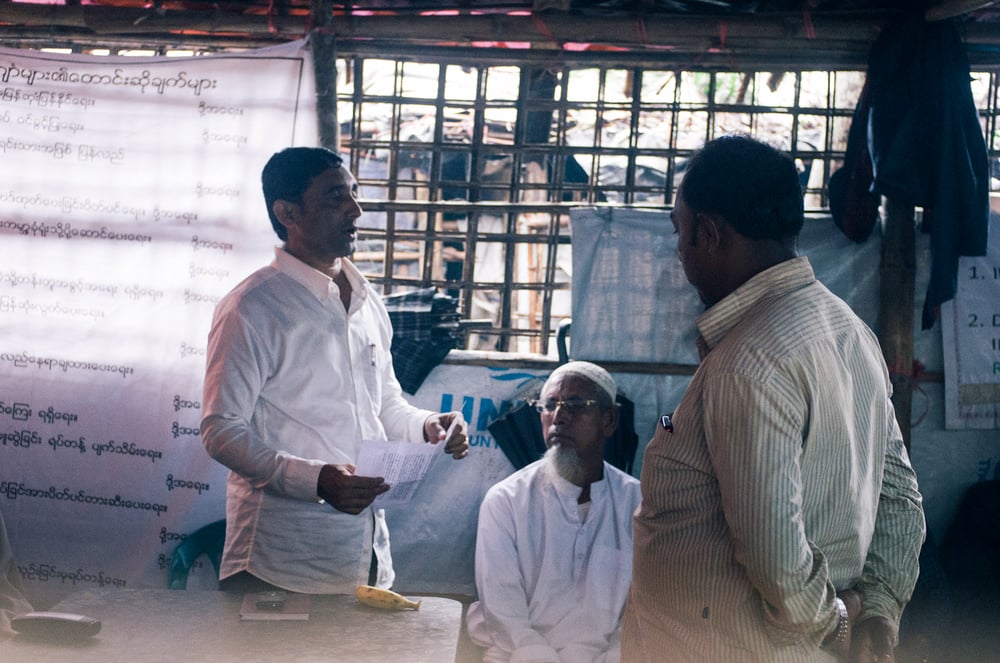 Kaamil Ahmed/IRIN
Mohib Ullah (left), a refugee who heads the group Arakan Rohingya Society for Peace and Human Rights, talks to Rohingya leaders from across the refugee camps.

Researchers and some humanitarian workers in the camps say aid groups have largely overlooked some of these emerging voices – part of broader criticism that the dozens of UN agencies, NGOs, and government bodies working in Bangladesh need to be more accountable to the refugees.

“They have done consultations with them, but it’s always after the fact,” said Jessica Olney, a consultant who works on community engagement in the camps. “It’s never as a decision-making stakeholder; it’s always informing people what was decided about them.”

With the future of Rohingya refugees uncertain, activists say the aid sector must do a better job of listening, or risk fuelling further frustration and disaffection among the very community it is trying to help.

Many of today’s unheralded Rohingya leaders are refugees from previous influxes. They’ve come up through makeshift schools run for and by refugees themselves – separate to the basic primary education offered in NGO-run centres.

Zahid Hossain arrived in the camps in 1991, when his parents were among an estimated 250,000 Rohingya who fled discrimination, violence, and forced labour in Myanmar.

When he was a child, he attended one of the refugee-run schools – often simple bamboo structures wedged alongside a teacher’s own shelter and funded by donations raised in the camps or from the sizeable Rohingya diaspora. Now 32 years old, Hossain is a teacher who educates the latest generation of Rohingya refugees.

On the bamboo walls of his one-room classroom, he has hung hand-drawn images of burning homes and tumultuous river crossings: the students who drew the artwork arrived in the camps during last year’s refugee surge.

Hossain believes that by educating young Rohingya refugees he can help foster a generation of leaders that will advocate for the community’s rights after years of persecution in Myanmar and lingering uncertainty about their future in Bangladesh.

“They have done consultations with them, but it’s always after the fact. ”

“We can sit here getting food from different organisations. We can sit idly by. But that would be worthless,” he said.

Hossain estimates that some 1,500 students have passed through his class since he started teaching a decade ago and, like Hossain, many of the children educated in the informal schools have become teachers themselves.

During last year’s influx, the schools offered medical help and food to the exhausted new arrivals. Today, the people behind the informal schools also take on community duties like collecting and disposing of waste. Graduates have gone on to work as interpreters with the many NGOs that have followed the refugees to the camps – helping to bridge the language gap by translating from Rohingya into both English and Bengali.

Another informal group, called the Rohingya Community Development Campaign, comprises educated Rohingya refugees who fled Myanmar last year or during a smaller influx in 2016. Members of the group have printed off digital copies of textbooks used in Myanmar schools – a way to ensure students will be ready if they’re ever able to return home.

Ullah’s organisation, ARSPH, also runs about 30 classrooms. The 43-year-old arrived with the newest wave of refugees last year. Educated in Myanmar, he initially mobilised new refugees in the camps to count the Rohingya killed during last year’s military purge – estimated by Médecins Sans Frontières to number at least 6,700.

But as ARSPH’s network of volunteers grew, Ullah turned toward education and advocacy. The group is promoting a village council structure for solving problems in the camps – mirroring traditional set-ups at home in Myanmar – and has volunteers on watch for signs of human trafficking.

"In 1978, our grandfathers and grandmothers faced problems as refugees. In '92, again; 2017, again," he told IRIN, recounting past waves of Rohingya outflows from Myanmar. "This is the third time. If we're not trying to solve our own problems, it will continuously go like this. So this kind of organisation is very important to represent the community, to solve problems its own way." 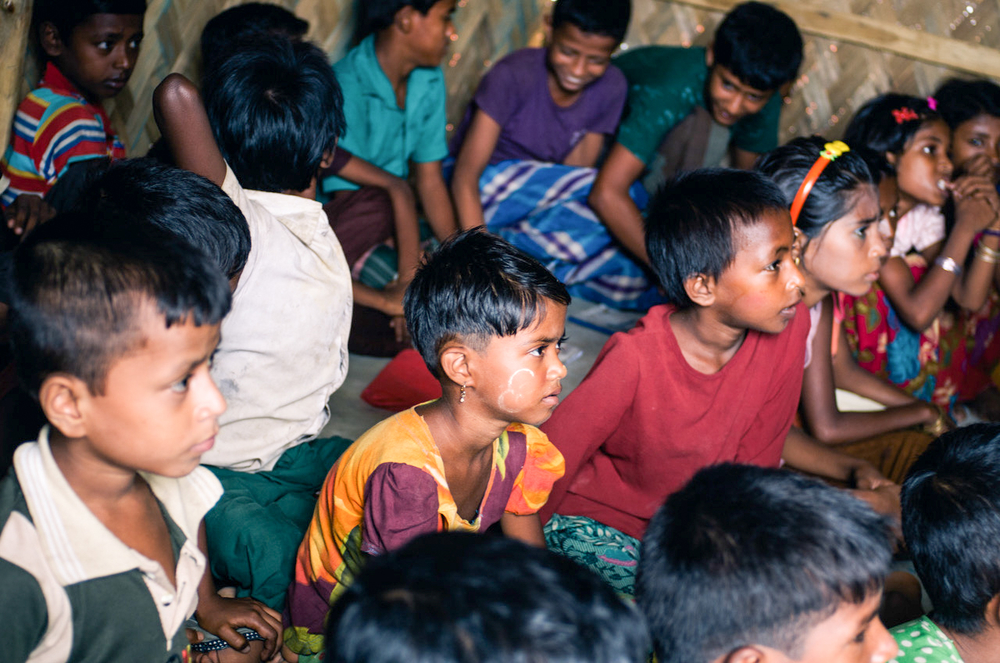 Kaamil Ahmed/IRIN
Rohingya children learn the Burmese language at a school run by ARSPH volunteers in Kutupalong, the largest refugee camp in Bangladesh.

Other homegrown groups have set their eyes on international justice.

In May, 400 women and girls in the camps stamped their fingerprints on a petition that went before judges at the International Criminal Court. The group, named Shanti Mohila, or “Peace Women”, called for the court to investigate the Myanmar authorities for ”deportation, apartheid, persecution, and genocide”. The court prosecutor has since opened a preliminary examination into the deportation allegations.

Aid groups have been criticised for not putting a greater emphasis on consulting Rohingya refugees throughout the ongoing emergency. More than 15 months on from the start of last year’s exodus, they do say they’re now making a more concerted effort. But this week’s protests show there’s still a divide.

"Yes, there is vulnerability, but at what point will you start giving them control over their own lives by helping them to be included in the decision-making process?"

Smruti Patel, co-founder of the Global Mentoring Initiative, which researches the role local organisations play in humanitarian crises, said there’s a "pecking order" around aid in the camps, and Rohingya sit at the bottom. She believes refugee skills are often overlooked, or the community as a whole is simply labelled as vulnerable and traumatised.

"Those kind of labels mean that people don’t take them as if they are active in their own development and their own well-being," Patel said. "Yes, there is vulnerability, but at what point will you start giving them control over their own lives by helping them to be included in the decision-making process?"

Olney said the major aid agencies working in Bangladesh are often unaware of schooling initiatives like Hossain’s, or hesitant about engaging with some of the more outspoken Rohingya advocacy groups, which are often critical of aid efforts in the camps.

“If refugee leaders could be engaged and have buy-in from the beginning, they’d be less likely to resist or make problems during the process,” Olney said. “I think that because they’re not being engaged at all, in consultations around repatriation, it pushes them more into tactics of mass resistance and non-cooperation.”

☰ Who speaks for the Rohingya?

As Bangladesh’s refugee camps grew throughout the 1990s, the government put in place a system of Rohingya representation where refugees known as “mahjis” were responsible for 100 families each. Sometimes elected but usually not, and almost invariably male, the mahjis have been used to coordinate aid supplies and feed information to refugees.

But the system is also seen as unaccountable and prone to corruption. Human Rights Watch has called for the mahji system to be replaced with an elected leadership structure. However, authorities and aid officials have not been able to fully roll out a new representation system.

These concerns about unelected leaders are reflected in how aid groups interact with the emerging Rohingya activists, Olney said. She believes groups like ARSPH are often not consulted because some aid organisations view them as “hardliners” due to their criticism of UNHCR and others. But there’s also scepticism about how representative such grassroots activists are of the wider refugee community in the camps, Olney said.

UNHCR did not respond to questions on this issue.

But the voice of the Rohingya refugees is being heard more and more.

The activists organising this week’s strike said they would stop working for three days and urged Rohingya teachers, health workers, interpreters, labourers, and others across the camps to follow suit.

Earlier this month, Rohingya protested against Bangladesh’s plans to kickstart returns to Myanmar in one part of the camps. The controversial scheme was abandoned at the last minute.

And this past August, on the anniversary of last year’s military operation, thousands of Rohingya lined the roads outside in protest. Students dressed in their old Myanmar school uniforms stood at one site; at another, women protested rape and sexual abuse allegedly committed by Myanmar soldiers.

For Nay San Lwin, a Berlin-based Rohingya activist, these are all positive signs of an emergent civil society within the camps. He believes an educated leadership is key to its evolution.

"As of now, the state is leading, the government is leading them, the aid community is leading them," he said. "But I am sure in a few months or a year from now, they will know themselves how they can take the lead for their own community."

(TOP PHOTO: Rohingya refugees shout slogans at a protest against a disputed repatriation programme at the Unchiprang refugee camp near Teknaf in southern Bangladesh on 15 November. CREDIT: Dibyangshu Sarkar/AFP)