This article is part of our in-depth coverage. Read more like this...
RASUWA DISTRICT/Nepal

Parang Tamang’s new home is slowly rising among the patchwork of half-finished buildings and piles of rubble in Gatlang, a mountain village in Nepal’s north. But so is his financial debt.

Parang’s home was flattened during the powerful earthquakes that struck Nepal in April and May 2015, killing 9,000 people across the country. More than three years later, government reconstruction subsidies haven’t been enough to cover the cost of rebuilding, so Parang turned instead to local lenders.

“The money I borrowed to rebuild my home is expensive,” Parang told IRIN. “The interest is 36 percent per year. The bank won’t pay me, so people in the village lent me the money.” 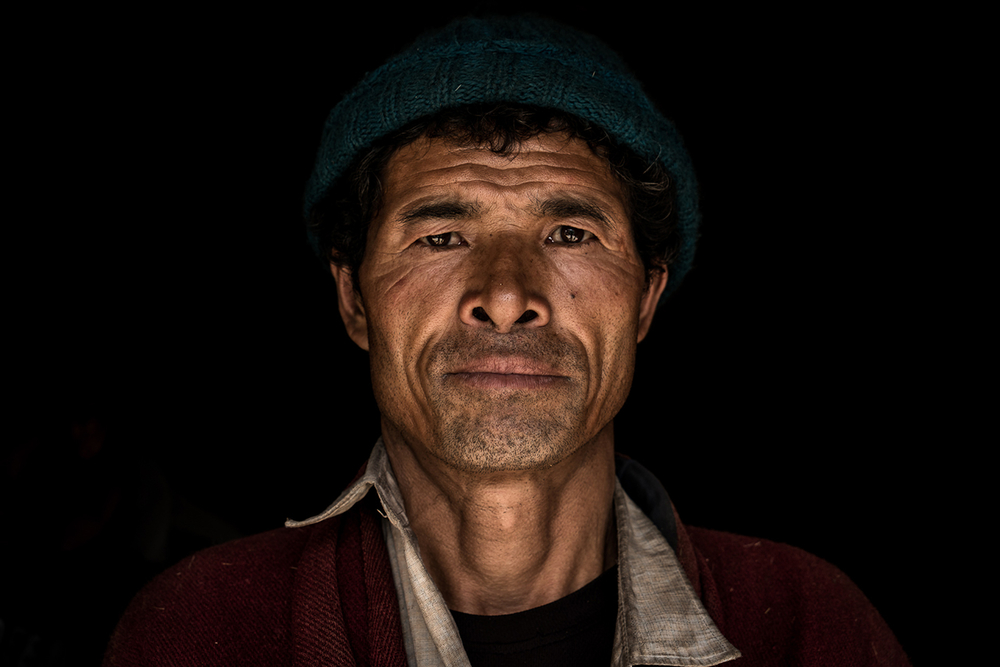 Vivien Cumming/IRIN
Parang Tamang is nearing completion of a two-room home for his family in Gatlang village. He says he’s grateful to have received nearly $3,000 in rebuilding subsidies. But he still had to get a 36-percent loan to cover his full costs.

Parang isn’t alone. In July 2017, the government set a series of shifting deadlines to encourage people to access reconstruction subsidies. Over the last year, a rush to meet these deadlines has triggered unintended side effects: people are taking on risky high-interest loans; some are building tiny, uninhabited homes they can’t afford to finish.

Advocates for earthquake-hit communities fear this large-scale borrowing could lead to a “debt crisis” that would cripple Nepal’s economic recovery.

A survey by aid organisations tracking reconstruction progress found a “drastic increase” in people resorting to loans to supplement government rebuilding funds since the start of 2017. Two thirds of respondents polled in December 2017 reported taking out loans to rebuild; 12 months earlier, it was only 1 percent.

“People weren’t rebuilding, so we had to do something,” said Manohar Ghimire, deputy spokesman for Nepal’s National Reconstruction Authority, which was set up shortly after the earthquake to manage the rebuild on a five-year timeline.

The latest deadline came and went in mid-July, though Ghimire says this is likely to be extended again. 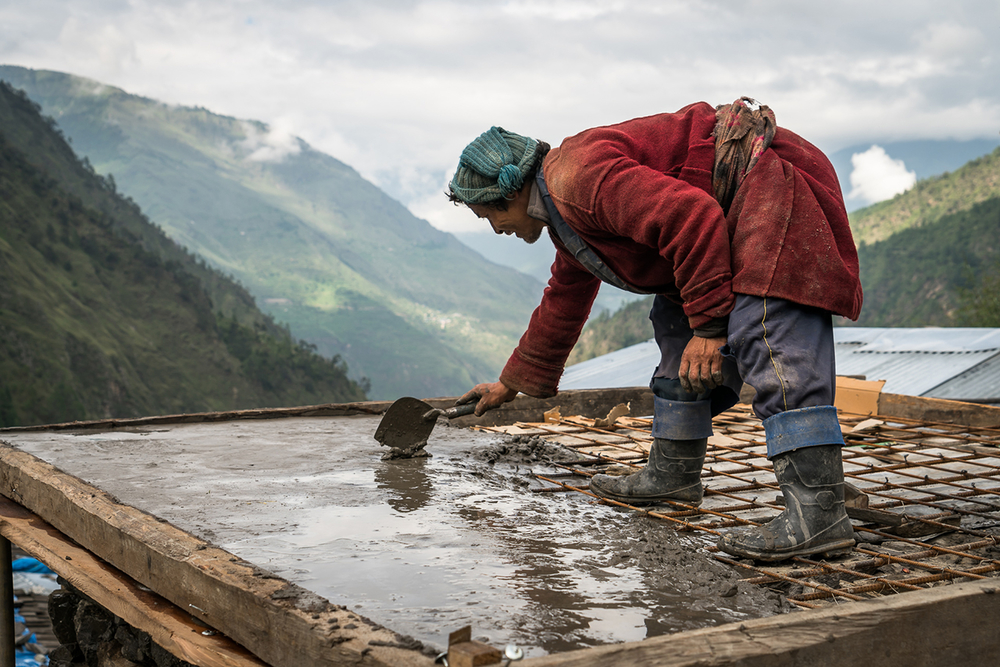 Vivien Cumming/IRIN
The high cost of labour and building materials has also held back construction in rural Nepal. Government subsidies cover less than half of the typical cost of rebuilding. Here, a mason works on a home in Gatlang village.

Ghimire calls the deadline pressure a success, as construction rates have risen over the last year. Today, more than 800,000 households qualify for government subsidies, which are distributed in three separate payments totalling $3,000, depending on the stage of construction. More than 440,000 have received the second of these payments – a year ago, only 55,000 people had.

The problem with a quick build

Villages like Gatlang and surrounding Rasuwa District were among the hardest hit by the 2015 earthquakes – more than 70 percent of buildings here completely collapsed; more than 95 percent needed major repair or outright reconstruction, according to government statistics. But money alone hasn’t been enough to counter rising construction costs that exceed the government subsidy, confusion about the deadlines, or a lack of building skills.

Rijan Garjurel is the district coordinator in Rasuwa for the Housing Recovery and Reconstruction Platform – a coordination body that supports all government departments, NGOs, and donors working on reconstruction. He says the deadlines saw many people rush to collect the grant, even if they lacked the resources or skills to build safer, earthquake-resistant homes as the government intended. 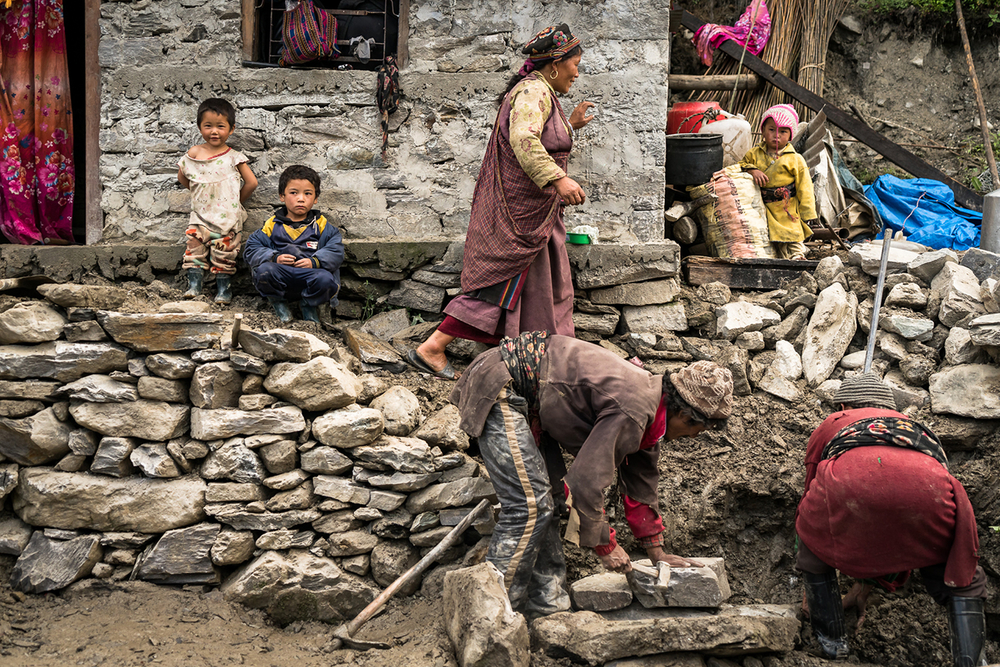 Vivien Cumming/IRIN
Families in Gatlang village build a house using locally sourced stone. Stone is cheap but time-consuming to prepare. Many in Gatlang have taken on risky loans to source more expensive building materials, which drives up their costs and their debt.

Instead, they’re erecting fragile one-room structures beside their still-damaged homes – the reconstruction grants can only be used for new construction, rather than retrofitting old homes.

“They are just building for formality to receive the grant,” Garjurel said. “I often hear, ‘this is my government house, and this is our house.’”

He says the deadline has pushed people to forego using local building materials like stone, which is inexpensive but time-consuming to prepare. Instead, many here use imported brick and concrete blocks, which are quicker to build with but more expensive. 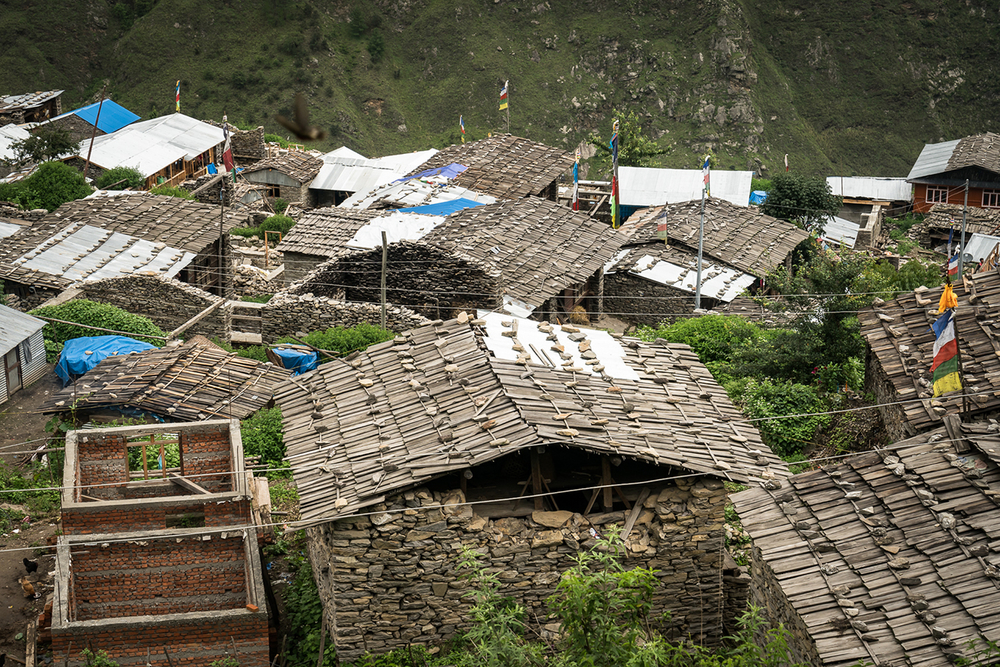 Vivien Cumming/IRIN
In Gatlang, earthquake survivors rushed to access government reconstruction subsidies before a July deadline. But with a shortage of funds, many are building tiny, one-room structures in which they don’t intend to live.

Recent surveys estimate that the typical cost of rebuilding is at least $6,500 – more than double the government subsidies.

“Transportation is expensive and so the money is not enough to get materials here,” said Dawa Gumbu Tamang, the elected head of Gatlang. “Many people start and then can’t carry on as they run out of money so houses are half built.”

Patience is a virtue

Reconstruction experts warn it is unrealistic to speed up such a large-scale reconstruction process in Nepal, where building costs are high and many lack the skills to rebuild entirely on their own.

“Deadlines are not going to speed these people up,” said Maggie Stephenson, a consultant who has advised NGOs and donors on recovery efforts. She added, “Who is in a bigger hurry than households themselves to rebuild their homes?”

Stephenson, who has also worked on earthquake reconstruction in Pakistan and Haiti, says recovery in other disasters has shown that a successful rebuild takes time.

After the 2005 earthquake in Kashmir, she says, it took at least five years to rebuild rural homes; urban homes there are still being constructed, 13 years later. 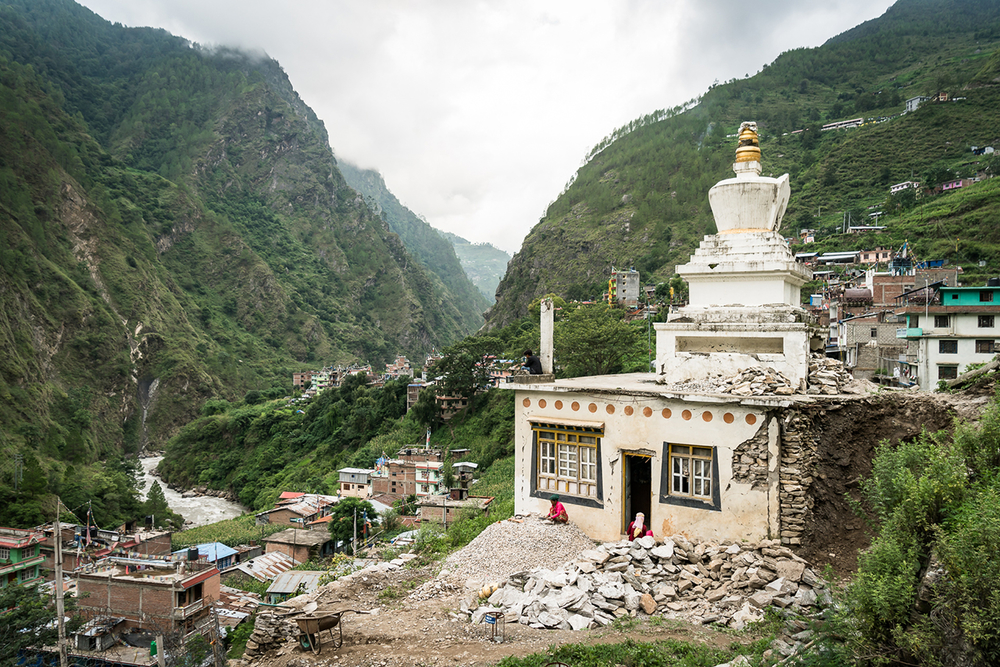 Vivien Cumming/IRIN
Women repair a fallen stupa in Syapru Besi in northern Nepal’s Rasuwa District. More than 70 percent of homes in the district collapsed during the April and May 2015 earthquakes.

Stephenson says Nepal’s commitment to extending reconstruction grants to more than 800,000 homes is “remarkable”. But it also requires more support beyond funding, as well as a degree of patience – a situation that isn’t helped by frequent international media stories suggesting the rebuild pace has been “slow”.

“The point of an owner-driven housing programme with a grant as a subsidy means that you're reliant on people mobilising their own resources as well,” Stephenson said, “and that’s going to take a much longer time.”

She says international donors and NGOs must do more to help rebuilding households overcome other roadblocks that have stalled construction, including boosting skills training so that more people know how to build and access the right materials. They also need to provide clearer information on the complex grant approval process, and do more to help typically marginalised groups like rural women and the elderly. Stephenson says this kind of essential technical support has only reached a quarter of the earthquake-affected communities who need it.

Chewang Gyalmo Ghale received training under such a programme. Practical Action, the UK-based development organisation, helped fund and train her to cut stones, which she sells to people rebuilding their homes in her village in Rasuwa District. 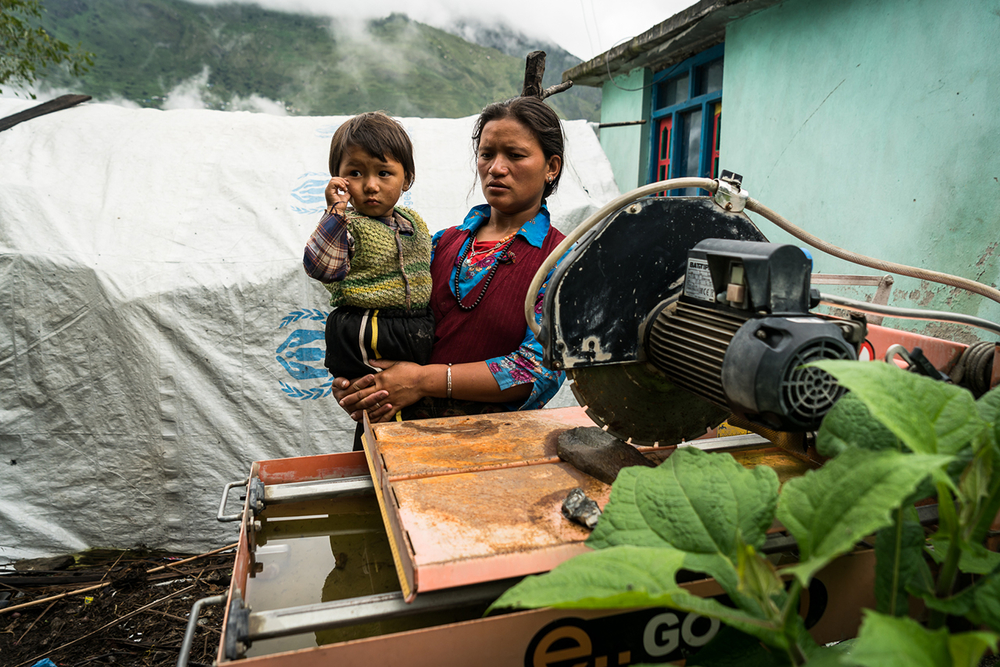 Vivien Cumming/IRIN
Chewang Gyalmo Ghale was trained to operate a stone-cutting machine, a skill she uses to prepare building materials for her neighbours. Most of her neighbours, she says, have taken out loans in order to pay her.

The money she earns is helping to finance her own rebuild. But she’s still living under a tarp – she says she hasn’t been approved for a government grant to finish her house, though she’s not sure why.

The grant money wouldn’t be enough to cover her rebuild anyway. It’s not enough for most of her neighbours, either.

“Many people here have had to take out loans to pay me to cut stones,” she said.