The UN General Assembly is the World Cup of diplomacy – and the 70th session was a big one. But does taking a super-sized delegation suggest profligacy, or punching above your weight?

The UN has now published the lists of delegations that attended last year's gathering in New York which established the Sustainable Development Goals (SDGs). IRIN took a look at which countries sent the largest teams to the cup and compared that to their national per capita income. Nearly 7,000 names are listed, most of whom enjoyed flights and hotel bills at taxpayers' expense. 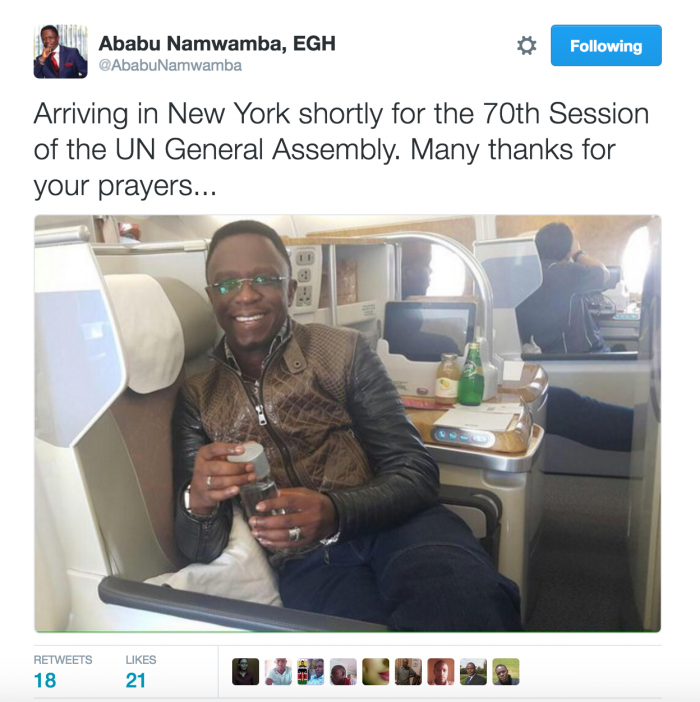 Some relatively poor countries sent dozens of diplomats and "advisors" to New York at great expense to their hard-pressed taxpayers. An average delegation is 35. The US team was the largest: it consisted of 382 politicians, diplomats and advisors from President Barack Obama downwards. Caribbean island nation Saint Kitts and Nevis sent just their prime minister and five diplomats.

The Bangladeshi delegation (unusually packed with businesspeople) was 210 strong – second only to the United States. Kenya sent a delegation of 74, one of whom took tough criticism from Kenyans on social media for his business class selfie en route (pictured above).

Developing countries need to work extra hard to be heard at global events and lobby for their citizen's interests, especially when the agenda is inequality, and economic and social development. Showing up in force has some real justification.

Nevertheless, when the cost of the air ticket alone is close to the per capita income of the country, some restraint is surely in order.

Earlier this month, another piece of SDG machinery was put in place when experts agreed on a whopping 230 individual indicators to monitor the 17 goals and 169 targets.

Perhaps it's time for a 231st indicator: the Sustainable Diplomacy Goal - delegations to UN summits should not exceed a certain affordability threshold.

In pursuit of a baseline for this indicator, we looked at the number of delegates per $1,000 of GNI per capita.

In New York, the 193 member countries signed up to new targets for reducing everything from poverty to pollution: the Sustainable Development Goals are designed to make the world a better place over the next 15 years.

It's early days, but development think tank CGD suggests only about half the 230 indicators have either acceptable country coverage or agreed-upon methodologies, let alone both. Worse still, as of now, only 39 of these numeric targets have credible data available. The whole focus on measurability has its own critics, too.