Turkey has been packing its jails with political offenders since a failed coup nearly 14 months ago, and prisoners’ families, lawyers, and activists have told IRIN of an increase in overcrowding, poor medical care, solitary confinement, and mistreatment.

Some 50,000 people have been jailed for suspected ties to the attempted takeover last July, including elected officials, academics, human rights workers, and journalists.

In total, monitors estimate that at least 220,000 people are currently imprisoned in Turkey and have documented deteriorating prison conditions that are corroborated by accounts given to IRIN.

Groups like Amnesty International say conditions are unlikely to improve in the near future, as alleged violations continue to pile up without state oversight or verifiable repercussions.

“It’s clear there’s a systematic attempt to silence dissent and this has gone a long way in creating a climate of fear within civil society, but it’s also clear this process hasn’t been completed,” Andrew Gardner, a Turkey-based researcher for Amnesty International, an organisation with two senior officials currently in detention, told IRIN.

“All signals are showing that problems are continuing and deepening.”

The Turkish government accuses a movement tied to US-based Turkish cleric Fethullah Gulen of orchestrating the failed coup, and defends the scale of arrests as necessary to maintain order in the country.

To make space for the growing number of political prisoners, state officials released more than 38,000 non-political criminals last August, including some guilty of violent offenses, even murder.

Some of those convicted of crimes against the state have no direct links to the coup attempt, but were jailed instead for protesting or expressing criticism of the increasingly authoritarian governing style of President Recep Tayyip Erdogan. 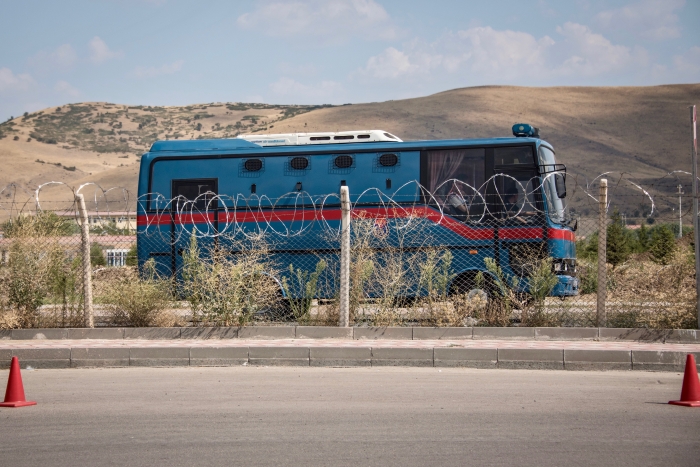 IRIN
A prison vehicle used to transfer inmates outside Sincan Prison, outside Ankara.

Sevgul*, a young mother convicted of spreading terrorist propaganda after taking part in a protest, was given a multi-year sentence even though her six-month-old was still breastfeeding. As Turkish law allows children as old as six to stay with their mothers in prison, she opted to serve her sentence with her child in tow.

Sent to a prison in the eastern province on Elazig, Sevgul found herself and her infant crammed with 23 other women into a cell built for eight.

The crackdown on alleged opponents of the state has given rise to hunger strikes by inmates across the country as penal institutions have become increasingly overcrowded.

Sevgul has struggled to care for her newborn, who cries through the nights and has developed a skin infection, according to Sevgul’s sister Ayten*.

Since the conviction, Ayten has taken Sevgul’s husband and older daughter into her apartment. Ayten visits her sister regularly and, in an interview with IRIN, described her sister’s difficulties in procuring baby food and supplies while in jail, as well as the wider human rights abuses that have become commonplace in Turkey’s post-coup prison system.

Ayten said Sevgul has been beaten at least once, when guards dragged her down a stairway by the hair for refusing orders to give a military salute.

The impacts of Sevgul’s detention have been felt through the entire family.

“Her older daughter cries sometimes when we are home and asks for her mother,” Ayten said. “She’s old enough to know what is going on now. I can see that she is as imprisoned as her mother and her little sister.”

Officials from Turkey’s Ministry of Justice and the General Directorate of Prisons and Detention Houses did not respond to requests for comment before the publication of this article.

"There are more prisoners and convicts than there is capacity to accommodate in our prisons." Gul said. "The prisons are approximately 110 percent full."

To reduce the burden, Gul is considering some partial pardons for additional criminals that would allow them to be transferred to lower-security "open" prisons. He also said the state is building new prisons to expand capacity.

Political prisoners’ woes begin far before conviction: Among recorded violations of international human rights declarations, to which Turkey is a signatory, is the use of lengthy pre-trial detention periods.

Ibrahim Bilmez, a lawyer representing political prisoners in Turkey, including Abdullah Ocalan, founder of the outlawed Kurdistan Workers' Party (PKK), told IRIN that political prisoners are subjected to frequent strip searches both before and after conviction, as well as restrictions on family visits. Meetings with lawyers are recorded by video cameras or conducted in the presence of security personnel, inhibiting the right to a proper defense.

“Everything now is arbitrary. Everything is now limited in prisons,” Bilmez told IRIN in a phone interview. “Normally, arrests are only done when they’re needed, but now they arrest first and ask questions later… We see people go to jail for crimes like propaganda and insulting the president in higher frequency than ever before.”

Allegations of torture and mistreatment in prisons have also increased over the last year. Prisoners have reported being held in stress positions over prolonged periods, while also being subjected to sleep deprivation, beatings, sexual abuse, and threats of rape. Bilmez said his clients told him of beatings inside their prisons following the coup attempt.

“[They] heard moaning, screaming, and groaning until the morning,” the lawyer told IRIN. “From the screams, they understood the torture was bad, but we don’t know the details of what happened.”

Political prisoners are also regularly denied access to doctors and medical examinations, which rights groups have claimed is a deliberate effort to stop the verification of torture allegations.

Banu Guveren, a lawyer who represents political prisoners, told IRIN that one of her female clients complained of abdominal pain following a beating. In response, the prison administration scheduled her a doctor’s appointment for two months later. The client lost consciousness within days and was rushed to the hospital, where she was found to be suffering from internal bleeding. She did eventually recover.

A range of interviews conducted by IRIN revealed that inmates were regularly disciplined through physical violence but that the most frequent use of force occurs during transfers between prisons.

This was the case for Mizgin Dag, a 23-year-old university student convicted of making terrorist propaganda for participating in protests and selling political magazines. Her sister, Zelal, told IRIN that Mizgin was assaulted while being transferred from her hometown of Adiyaman in southeastern Turkey to Tarsus prison in Mersin, on the country’s southern coast.

“I saw her 20 days after she was beaten and she still had bruises on her arms and face,” Zelal said. “It was obvious they used more than just their hands.”

Upon arriving in Tarsus prison, Mizgin was not given water for three days and was denied access to a doctor for two weeks, according to Zelal.

Ozturk Turkdogan, chairman of the Human Rights Association in Turkey, explained how political prisoners are often transferred to jails far from both their families and court hearings.

The distance between inmates and their hometowns not only makes it more difficult for family members to visit, but can also be used to force inmates to attend trials through SEGBIS, the audio/video communication interface similar to Skype that is used by the Turkish government.

“The transfers, which we call ‘sending people into exile’, dehumanise defendants by barring them from attending hearings in person,” he told IRIN in a phone interview. “The use of SEGBIS strips them of the ability to interact with people in the court.” 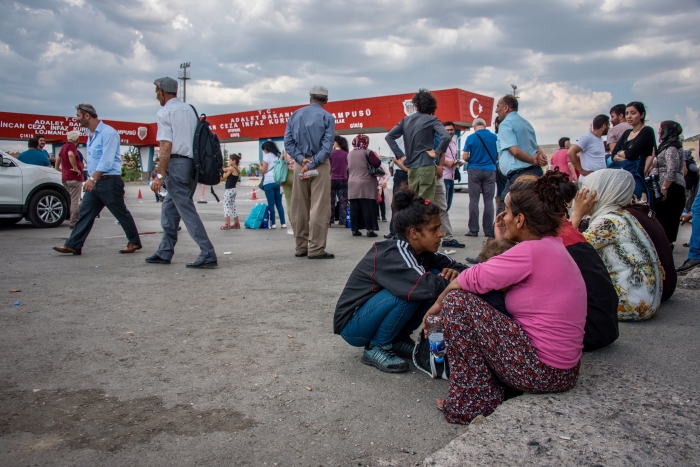 In addition to prison conditions and rights violations, inmates in Turkey must also pay for water and gas usage while incarcerated. Extra food, books, phone calls, trips to the hospital, and bathroom supplies are all added to inmates’ prison bills. As a result, some women with minimal financial resources cannot afford basic hygienic items such as sanitary pads (which they are not provided), Guveren said.

Lawyers who spoke with IRIN were especially concerned about the frequent use of solitary confinement. They said guards discipline inmates by locking them in süngerli odalar or “sponge rooms”, cells named for the yellow foam mattresses that pad their interiors.

Guveren said one of her clients was locked in such a room for 30 days. The client told her his mattress was soaked with water when he first entered and he was barred from all human contact during this period.

Emek Abay, whose husband Umut is currently in Tekirdag prison, told IRIN she’s heard of prisoners being kept in “sponge rooms” as an additional form of discipline after being beaten by guards.

During her visits to Tekirdag, her husband rarely shares details of events occurring in the prison, but their lawyers have informed her of systematic physical and sexual abuse in the detention centre.

State-run commissions responsible for monitoring prison conditions have either been dissolved following the coup attempt or remain largely ineffective. The result, Guveren said, is that prison guards and administrations operate largely without oversight.

In addition, an emergency decree passed last year shields state officials from almost any penalisation for acts of violence or abuse perpetrated on prisoners linked to last year’s coup attempt by stating: “Individuals who make decisions and perform their duty in the context of this decree bear no legal, administrative, financial, or criminal responsibility for those duties performed.”

Reports of torture had been steadily declining in Turkey, following years of military dictatorship in the 1980s and heavy conflicts with Kurdish militants in the 1990s. Allegations of abuse during police custody began to rise again in 2015, when military operations resumed in southeast Turkey and have since spiked with the post-coup crackdown.

The Human Rights Association’s Turkdogan blames the regression not only on Erdogan and his ruling Justice and Development Party (AKP), but also on what he claims to be continued silence from the international community and the European Court of Human Rights (ECHR), which has jurisdiction over Turkey because it is a signatory to the European Convention on Human Rights.

“What’s happening in Turkey and its prisons is the result of negligence by the Council of Europe and the ECHR,” Turkdogan told IRIN.

The ECHR has said Turkish nationals filed more than 5,000 cases in 2016 related to the post-coup purges.

When asked for a response to such accusations, a press officer with ECHR said the court was “not in a position to make any comment” on the matter aside from what has already been published in its press releases.

Meanwhile, a state of emergency continues in Turkey, and new arrests are announced weekly. Rights groups say the credibility of an impartial justice system has also been undermined with the April referendum, which will allow Erdogan to appoint a larger portion of judges and high ranking officials in the Justice Ministry.

Regarding the ongoing purges, some believe the use of heavy-handed punishments are part of Erdogan’s presidential campaign strategy for 2019, while others, like Guveren, have come to accept the crackdown on dissent as the new foundation of Turkey’s judicial system.

“Sadly, and I say this as a lawyer, we do not expect any justice from this country,” Guveren told IRIN. “We will continue to fight, but we also have to face the facts.”

*The source was given an alias to protect his/her identity.

(TOP PHOTO: A watchtower overlooking the Sincan Prison complex outside the Turkish capital of Ankara.)