After just three weeks, Karla Morales realised her dreams of making it in Colombia were shattered.

As the COVID-19 crisis erupted, the 29-year-old Venezuelan travelled across the border with her husband and their youngest child in search of job opportunities so they could send money back to two other children they left behind in their economically crippled homeland.

Not long after arriving in the southern city of Pasto – where they sold sweets to commuters at traffic lights – the Colombian government announced a strict nationwide lockdown to curb the spread of coronavirus. Already disenchanted, the couple knew they had to get out, or face even tougher circumstances than in Venezuela.

They made it back, but were shocked at the conditions they were subjected to at a quarantine installation in Venezuela.

“We didn’t know we were going to be taken there,” Morales told The New Humanitarian by phone on 1 May. “They treated us like dogs. I wanted to go back to Colombia. I really thought about leaving and walking back. I was scared. I felt unsafe.”

Their journey started easily enough. Along with 250 other Venezuelan migrants, they found places on a bus organised by the mayor of Pasto. It took them to Arauca, a Colombian city on the Venezuela border – albeit a long 30-hour trip.

Crossing the border into the Venezuelan state of Apure, they were passed over to the control of officials who took them to an abandoned school in the nearby town of El Amparo, where they were informed they would have to remain in quarantine for two weeks.

“There wasn’t enough food for 250 people,” Morales said. “They gave us rice that was still half raw, mixed with lentils, and that’s it.”

Several Venezuelan returnees sent TNH photos and voice messages showing and describing the squalid conditions at the facility in El Amparo and another one in neighbouring Táchira state where they estimated that some 400 returning migrants were being quarantined.

“We had to sleep on the floor; the children were crying; people were fighting because tensions were high.”

Many migrants TNH spoke to in Táchira and Apure were reluctant to talk openly due, they said, to fear of reprisals from those running the quarantine facilities – said to be Venezuelan National Guard officials and local police.

Morales, one of the few willing to be quoted by name, said those running the facility in El Amparo called them “traitors of the state” for having left Venezuela for Colombia. “A lot of children got sick because of the water,” she said. “We had to sleep on the floor; the children were crying; people were fighting because tensions were high.”

Hundreds of thousands of Venezuelans have fled Venezuela’s economic collapse in recent years and become informal migrant workers abroad. As COVID-19 lockdowns have decimated jobs, many have found themselves unable to pay for day-rate accommodation or feed their families.

Instead of going hungry and homeless on the streets, some, like Morales, choose to return to the country they once fled, where at least they may have some family to give them shelter. Some are even walking back.

Colombian authorities estimate 20,000 have left, but the real number is believed to be far higher. As it has stepped up efforts to contain the coronavirus, the Colombian government has come down harder on migrants trying to leave.

“We cannot allow that the unorganised exit of Venezuelans puts the country at risk,” the migration authority said in a 29 April statement, threatening “administrative and penal sanctions” against Venezuelans heading to the border and breaking lockdown rules.

TNH asked the Colombia heads of five international aid organisations about the quarantine installations along the Venezuelan border, but information was scarce.

Aid officials admitted they knew very little about the situation for returnees. All said they were working together to dissuade Venezuelans from returning during the lockdown, and offering humanitarian assistance, including bolstered cash payments.

Jozef Merkx, Colombia head of the UN’s refugee agency, UNHCR, told TNH he had “no detailed information about the other side of the border”.

“We are worried about the sanitary implications during the returns,” he said. “That is why we don’t want to promote returns, and instead offer alternatives inside Colombia through temporary shelters and cash transfers.”

Dominika Arseniuk, Colombia director for the Norwegian Refugee Council, expressed concern about the availability of food and sanitary conditions in the border quarantine installations.

“We don't have access, and I think that no other organisation has,” Arseniuk said. “It’s managed by the local [Venezuelan] authorities, and they don’t grant us access. Obviously, we have requested it, but it hasn’t been granted,” she said, adding that NRC teams in the border areas and in Bogotá were encountering thousands of Venezuelans who wanted to return.

Peter Gape, head of World Vision in Colombia, described the information he had on the quarantine installations as “all very informal”.

“What we hear is that the government on the other side has installed quarantine units using schools and other places,” he said. “We heard the situation is difficult, and that people in the communities where these schools are located are not very happy about having returnees stay there, for obvious reasons.”

TNH reached out to Venezuelan regional politicians in the border area, as well as some smaller aid organisations inside Venezuela, to seek more information about the quarantine facilities. None replied, despite multiple requests.

What is clear is that COVID-19 is compounding a humanitarian crisis in once oil-rich Venezuela, where hyperinflation has sunk the economy and left many people jobless, short of food, lacking basic medicine and hospital care, and facing increased insecurity.

The Venezuelan government has long denied any humanitarian crisis in their country despite almost five million citizens – one in six people – fleeing abroad in recent years. Over 1.7 million Venezuelan migrants and refugees now reside in Colombia, with millions more scattered across the wider region.

Venezuela’s President Nicolás Maduro has told migrants they will be greeted with open arms if they return, and flights from Peru and Ecuador have been organised in the past week to bring back those who request it.

We're looking out for our compatriots who are victims of xenophobia & have decided to return to Vzla, their homeland. Here we've our arms opened to them as we have done with millions of people who have found in our country a land of peace & hope. Welcome! pic.twitter.com/7EmqbcVQTx

“What is concerning at this time is that you have people coming even from Ecuador, which is in a really bad situation [from COVID-19], coming to Colombia, then going to Venezuela,” said Marianne Menjivar, Colombia and Venezuela director for the International Rescue Committee. “I mean Venezuela was already in a really overstretched situation, and now what you have is a scenario of more shortages.”

The deputy director of the Americas division of Human Rights Watch, Tamara Taraciuk, told TNH they are starting to look into the situation at Venezuela’s quarantine installations but they have little information for the time-being.

“We know that there’s overcrowding and unsanitary conditions,” she said. “There have been some statements from high-level officials calling returnees traitors and [saying] that they are not going to get benefits because they left and now they’re coming back.”

Taraciuk said the fact that thousands of people are returning to a country with a humanitarian emergency, “where there is an increased crackdown on critics and opponents”, shows how desperate migrants have become in host countries.

“It is extremely worrying that once they decide to return... they are being subject to these unsanitary conditions, because Venezuela is totally ill-prepared to address a pandemic,” she said. “You have hospitals without access to water, you have difficulty accessing water in low-income neighborhoods, and being in these installations in a country that is not prepared for a pandemic does not pose well for these people.” 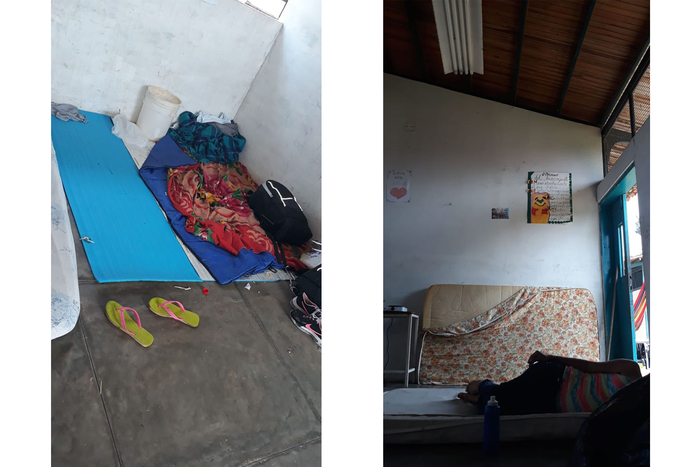 Karla Morales/TNH
Cramped and unsanitary conditions at the El Amparo quarantine facility at the Venezuelan border.

Colombia closed its 2,219-kilometre border with Venezuela on 14 March as it rolled out other coronavirus-related restrictions. Many of the dangerous informal border crossings, known as trochas, are still in use, according to aid organisations.

Diplomatic ties between the neighbours are almost non-existent, however they are working together on a “humanitarian corridor” that allows around 200 Venezuelans to return on a daily basis, according to Colombian migration authorities. Thousands more have to be sheltered at the Colombian border and wait, sometimes for several days, until they are allowed to cross.

Amid fears some Venezuelans could be being pressured or encouraged to leave, the aid organisation country directors in Colombia criticised mayors for laying on buses for Venezuelans wanting to go back to the border, as was the case for Morales.

“Some city governments where some returnees come from have facilitated buses, and that’s something we discourage as an organisation,” said Gape, of World Vision.

Arseniuk agreed, and said xenophobia and discrimination against Venezuelans was on the rise in Colombia. “That kind of language has increased, and is a cause for concern because we are sure this is contributing to the decision of Venezuelans to go back,” she said, adding that some mayors had turned down the NRC’s offer of help in setting up shelters for Venezuelans, preferring to bus them to the border instead.

Felipe Muñoz, a special adviser to the Colombian president on migration and the Venezuelan border, said the Colombian government doesn’t support bussing Venezuelans back but can’t force them to stay either.

“If we try our best to offer alternatives and they still want to return, what can Colombia do? It’s their human right,” he told TNH. “What can we tell them? Do we prohibit them? Do we let them walk with children along the highway instead of organising a bus to take them?”

“This is a pendular migration. People are not returning [to Venezuela] to stay; they are returning because they were desperate in these countries.”

Anecdotal reports from across the border in Venezuela suggest the number of returns was already high, and growing fast.

Adriana Salas, 37, from Maracay, spent 18 months in Colombia working informally as a cleaner before recently walking back to Venezuela. When TNH managed to contact her on 30 April, she had not yet been taken for quarantine.

“It’s so full here,” she told TNH in a WhatsApp voice message, with the little internet connection she had. “I’m here in San Antonio [a Venezuelan border town]. There are so many people. More and more people are arriving each day. The amount of Venezuelans leaving is unbelievable.”

For Taraciuk of Human Rights Watch, this latest trend of returns is unlikely to last.

“This is a pendular migration. People are not returning [to Venezuela] to stay; they are returning because they were desperate in these countries,” she said. “They can spend the pandemic in better conditions in Venezuela than on the streets in Colombia, Ecuador or Peru. But the truth is that this could be a catastrophe for the region, because they are going to go back, and the exodus is not going to stop.”