China Maurice’s closest brush with death came during Haiti’s catastrophic 2010 earthquake. She was working at a pharmacy when the walls and roof crumpled around her. Several of her colleagues were killed. Suffering from chronic asthma, the 49-year-old now wonders if she will survive COVID-19.

She is not alone. Many of the 11 million people in the Caribbean country – from the doctors and nurses, to economists and aid workers, to others with underlying health conditions like Maurice – are also wondering how bad things are going to get.

The poorest nation in the western hemisphere is ill equipped to handle a health crisis of this magnitude. For more than a decade, Haiti has lurched from crisis to crisis. It has yet to fully recover from the earthquake – let alone subsequent cholera outbreaks, political upheaval, hurricanes, and other natural disasters.

It is also in an ongoing economic and political crisis. Just as the pandemic arrived, Haiti was dealing with the fallout from protests that have paralysed the economy for more than a year and demonstrations that have tested the government’s authority.

So far, three Haitians have died, and 47 others have tested positive for the virus. More than 30 cases are people who have flown in from abroad, but the first death was that of a 55-year-old man with no travel history or underlying health issues, suggesting there may already be community transmission.

A lockdown has nominally been in place since 19 March. Schools and businesses are closed, and public gatherings such as Souvenance – a Vodou festival that usually draws thousands to gather and celebrate around Easter – have been cancelled or postponed.

However, although vehicle traffic has slowed, there has been little to no enforcement of the lockdown. Many workers who sell food and other items on the street corners of the capital, Port-au-Prince, and other towns and cities say they can’t afford to stay home.

The virus has yet to hit slums like Cité Soleil on the edge of Port-au-Prince where some 500,000 people live in squalid conditions. More than a third of Haitians lack access to clean drinking water, and two thirds lack sanitation – stark realities that contributed to nearly 11,000 cholera deaths after the earthquake.

Read more → Coronavirus in the city

Maurice lives in one of the capital’s many densely populated communes, Martissant, an area swollen with people living side by side in small cinder block dwellings.

Haiti has one of the highest rates of urbanisation in the world, with much of its population living cramped in cities – an increasing trend that contributed to the large death toll in the earthquake, estimated to be between 100,000 to 300,000 people. More than 1.5 million people were also displaced, and thousands are still without homes a decade on.

“There are a lot of people living on top of people; families with very little money and many children,” Maurice, who hasn’t left her house in two weeks, told The New Humanitarian by telephone. She fears continuing her job as a clothes vendor on the streets may put her at greater risk of contracting the virus, but she also worries about how she will feed her four children, and how her underlying health condition might worsen her chances if she becomes sick.

Haiti has the highest incidence of tuberculosis in the Americas and high rates of other chronic health problems such as diabetes and hypertension. It also has the most HIV/AIDS cases in the Caribbean – the region with the highest HIV prevalence outside sub-Saharan Africa.

“There are a lot of people living on top of people; families with very little money and many children.”

“We're talking about a weak health system that has already failed to meet people’s needs,” said Elizabeth Campa, senior health and policy adviser for Partners In Health, a Boston-based non-profit known as "Zanmi Lasante" in Haiti. The group runs University Hospital in Mirebalais – a commune about 60 kilometers northeast of Port-au-Prince – which was created by Partners In Health after the 2010 earthquake. It is now one of the only hospitals treating COVID-19 cases in the country. The hospital has also started providing rapid blood testing.

Haiti does have one advantage over some countries. More than half of its population is under 25. The vast majority of global COVID-19 deaths have occured in people over 40.

The earthquake damaged or destroyed much of Haiti’s infrastructure and essential services, including dozens of hospitals and clinics. A sprawling general hospital in Port-au-Prince, intended as a flagship reconstruction project, is still to be completed more than 10 years on.

According to a 2019 study, Haiti only has 124 intensive care beds and 64 ventilators. Campa told TNH the number of working ventilators could be closer to 20. There is also a lack of oxygen for potential coronavirus patients, and only one national laboratory that can test for COVID-19.

Journel Ito, head of the Molecular Biology Laboratory Service at the National Public Health Laboratory in Port-au-Prince, told TNH there are two machines in the lab that can conduct up to 100 tests a day. Plans are underway to have five more test sites across the country, Ito said.

There have already been lags in testing. Several doctors told TNH that when patients with COVID-like symptoms are admitted in hospitals, it can take days for them to be tested.

Some patients, meanwhile, have been turned away by fearful medical staff who lack protective gear, Dr. Jean Ardouin Louis Charles, director of the Sanatorium Hospital in Port-au-Prince, told TNH.

“One of our hospitals said they had received a patient who had been rejected by at least three other institutions before they came to them,” said Frank Geneus, president of the Haitian Association of Private Hospitals.

Other patients with serious health conditions are choosing to stay away – a trend that has been reflected in other parts of the world. Some fear the Haitian healthcare system simply can’t cope. Many rely on free healthcare provided by NGOs rather than go to underfunded public hospitals where treatment can be expensive but haphazard.

For others with weakened immune systems like 20-year-old Christinsen Lamye, who contracted HIV from his mother, arrangements have been made to obtain six months’ worth of medication to avoid the risky four-hour crowded journey to the hospital.

“Coronavirus is something I am really afraid to catch,” Lamye said. 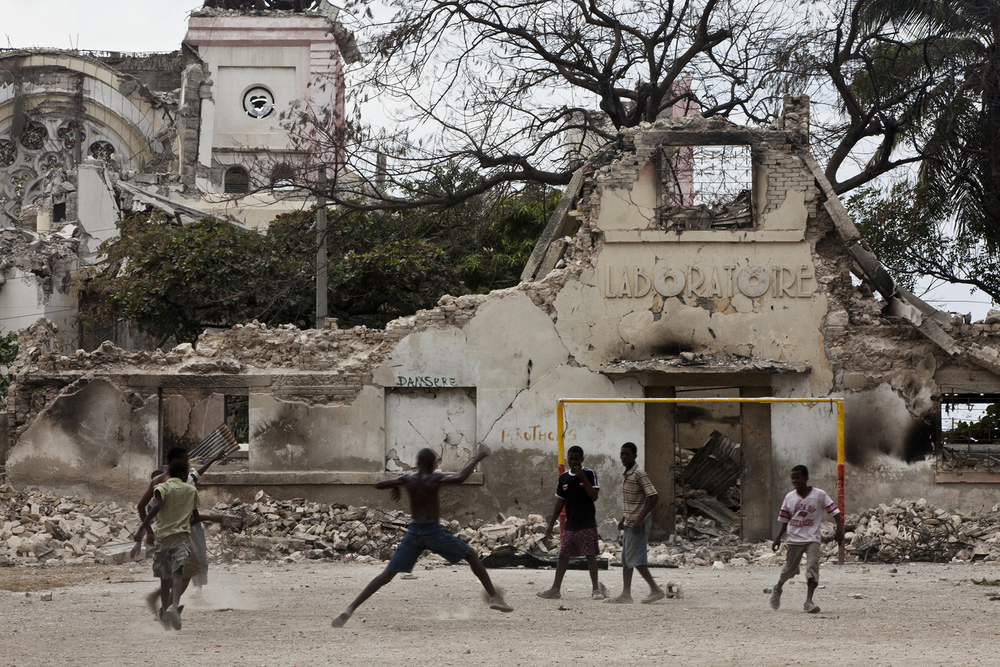 Marko Kokic/ICRC
Children play soccer near the ruins of a destroyed cathedral in the aftermath of the 2010 earthquake, which left between 100,000 and 300,000 Haitians dead.

Haiti also has the highest rates of childhood malnutrition in the western hemisphere, and nearly four million people – more than one in three Haitians – are estimated to be in need of urgent food assistance.

“During an infectious disease outbreak, like COVID-19, malnutrition rates can increase sharply, leading to higher mortality rates due to compromised immune systems,” said Antoine Vallas, a spokesperson for the World Food Programme in Haiti.

The WFP has limited its movements in Haiti, with nearly all of its staff working remotely. Emergency distributions of cash and food were suspended but have since restarted in five of the 10 departments across the country.

With schools closed, Vallas said the WFP has started to provide take-home food rations to schoolchildren and their families. He said the UN agency feeds approximately 300,000 students a year, many of whom would go hungry without a school meal.

Food insecurity was a problem before the pandemic, exacerbated by rolling protests that began in 2018 over increases in fuel prices. The demonstrations grew in 2019 and into 2020, with calls for the resignation of President Jovenel Moïse, accused, with other senior officials, of embezzlement.

The Ministry of Finance predicts Haiti’s economy could contract by 2.7 percent this year due to the ramifications of the coronavirus. It already contracted by 1.2 percent due to protests and unrest last year, according to economist Kesner Pharel, who told TNH that Haiti can expect to see the 20 percent inflation rate rise to nearly 30 percent, further straining unemployment and poverty because of declining exports and trade with the United States.

So far during the pandemic, the prices of goods have largely remained the same; government officials have been penalising merchants for any price hikes.

Haiti shares the island of Hispaniola with the Dominican Republic, which has seen 4,680 confirmed COVID-19 cases and 226 deaths.

Although Haiti closed the border between the two countries on 16 March, some commercial trade is still being allowed and there has been an increase in overall border crossings, with Haitians in particular returning from the Dominican Republic due to its larger number of cases.

In a report published by the UN’s migration agency, IOM, there have been more than 16,200 reported border crossings since 12 April. Before, there were fewer than 7,000 a day, according to Giuseppe Loprete, IOM’s chief of mission in Haiti.

It is unclear how many Haitians who have fled the Dominican Republic could have been exposed to the virus or carried it home.

Authorities say they have too few resources to stem the flow completely.

Macluche Ledoux, mayor of the Haitian border town of Belladère, said he had tried to impose a lockdown but didn’t have the needed police to implement it – there is only one police station and a handful of officers for a population of 120,000.

Angenor Brutus, who coordinates the work of eight associations and NGOs on migration issues along the border, told TNH the virus is likely to spread unless more border controls are put in place.

“People coming from the (Dominican Republic) where there are many more cases of coronavirus should be put in quarantine,” she told TNH. “Instead, they are administered a quick test at immigration and then left to enter the country.” 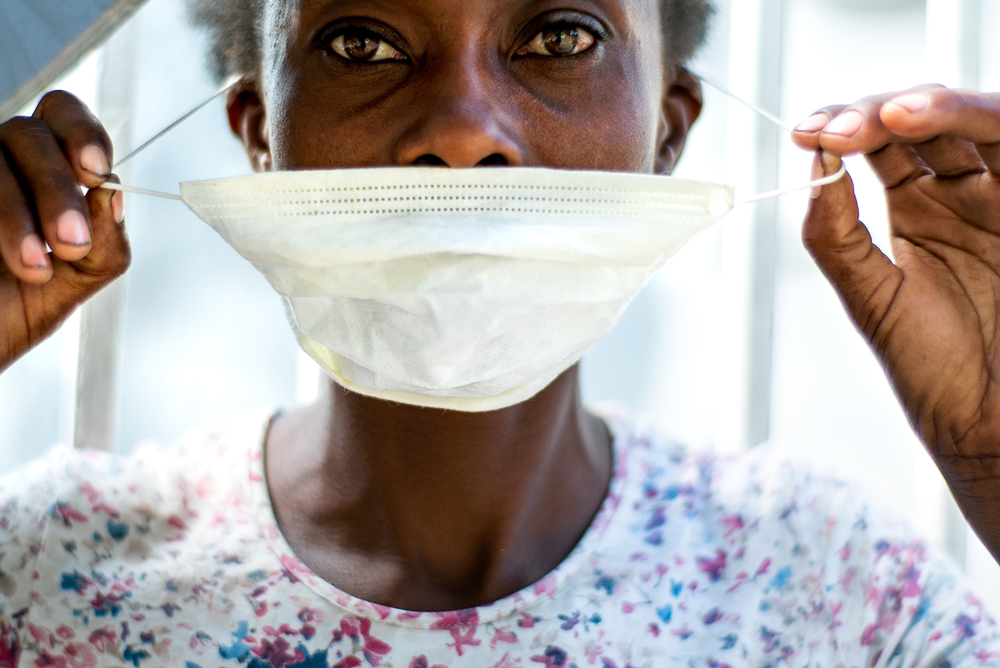 Jessica Obert/TNH
Despite the lockdown, Lelene Gentileus, 32, is staying out on the streets selling goods to make enough money to feed her two daughters.

Radio stations and TV broadcasters have been playing jingles about COVID-19 to encourage people to practise social distancing and proper hygiene.

Although there has been less vehicle traffic and fewer large gatherings, most people can’t afford to stay home. Market women continue to sit selling their goods, and motorcycle taxis knot the roads.

“At least during the cholera outbreak doctors knew how to help you if you went to the hospital. What is so scary this time is that there is no treatment.”

Few people wear masks; most make do with cloth bandanas or with nothing at all.

On a street corner where throngs of passers-by and neighbours stop to talk, Lelene Gentileus, a 32-year-old mother of two sells goods such as cigarettes and candy.

Gentileus is no stranger to loss from diseases. Her grandmother died from cholera – believed to have been brought in by UN peacekeepers from Nepal in the wake of the 2010 earthquake.

“At least during the cholera outbreak doctors knew how to help you if you went to the hospital,” Gentileus told TNH. “What is so scary this time is that there is no cure.”