This article is part of our in-depth coverage. Read more like this...
QUIBDÓ

At a ceremony earlier this week, UN inspectors confirmed that more than 7,000 FARC rebels had turned over their weapons, marking the formal conclusion of a months-long disarmament process and another important milestone for the government’s historic peace agreement with Colombia’s largest guerrilla group. But the peace deal with the FARC has not brought an end to the country’s 53 years of armed conflict. Other armed groups remain active and may even be ramping up their use of violence to secure a similar deal with the government.

It was a typically humid afternoon in Pie de Pepé when a gunshot pierced the calm of the tiny town in Colombia’s Baudó region near the Pacific coast. Edwin Jackson Mosquera fell to the ground on the dirt road he had been walking along to start his shift at the local police station.

Police killings are nothing new in Colombia, where government security forces have been fighting an array of armed groups for decades. But the circumstances of the 8 May murder of Mosquera, a 29-year-old father of two, remain murky.

Police quickly arrested the gunman, but they haven’t provided any information to Mosquera’s family about who was behind his death.

“We want the truth,” said his aunt, Luz Dari. “And we want justice to be done. This case can’t go unpunished.”

While no one can be sure of the motive, and results of investigations are rarely conclusive, Mosquera’s killing came during a month of intensified attacks on Colombia’s security forces that have been orchestrated by the National Liberation Army (ELN), Colombia’s second largest armed group and other armed groups, including the Gaitanista Self-Defence Forces of Colombia (AGC).

A Defence Ministry internal document dated 9 May, which was leaked and published in the media, cited intercepted communications between the ELN and other “organised armed groups” in which they discussed a plan to target security forces by rewarding killers $700 per victim.

By the end of May, at least 20 officers had been killed and 177 injured, according to the Defence Ministry’s figures. In comparison, five officers were killed and 67 injured in April.

“The morale among us all is very low,” said a high-ranking policeman working in the Baudó region who did not want to be named.

“It’s tough to hear people, even your own family, ask, ‘If they’re killing policemen, who are armed and know how to defend themselves, what chances do we have?’” 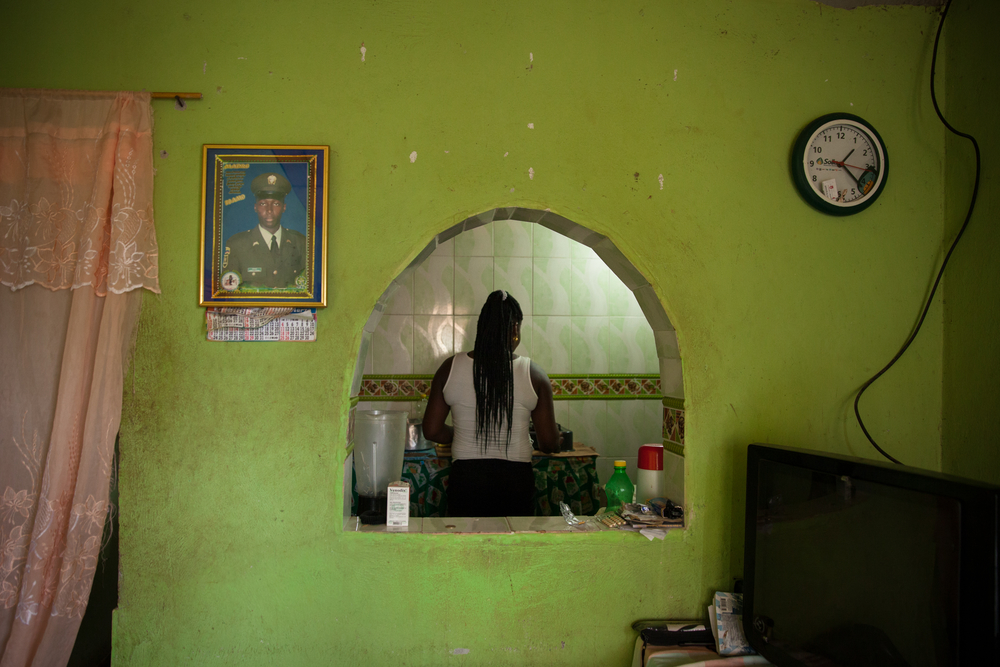 Erika Piñeros/IRIN
Luz Dari cooks at her family's home in Tadó, Chocó. Her nephew, Edwin Jackson Mosquera, was assassinated on his way to work in Pie de Pepé

The so-called “pistol plan” to step up attacks on security forces, and the violence that continues to terrorise and displace communities across the country, are widely seen as a tactic by illegal armed groups to pressure the government into making concessions during peace negotiations. Analysts and officials say the controversial agreement between the government and the FARC, has emboldened other groups, in particular the ELN.

The ELN was behind a bomb that exploded in the heart of the capital, Bogota, killing a policeman and injuring another 23 officers and two civilians in February. And on 20 June, their fighters kidnapped (and later released) two Dutch journalists working in the northeastern province of Norte de Santander. The ELN is believed to have been responsible for numerous other kidnappings and attacks this year.

“There is a long-standing belief in Colombia that if you are an illegal armed group without a particular ideology, fighting the state would be enough to pressure the government into entering a peace process,” said Kyle Johnson, an analyst for the International Crisis Group in Colombia.

“Groups such as the ELN and the Gaitanista Self-Defence Forces of Colombia (AGC) have increased their violence, looking to achieve stronger negotiating positions vis-à-vis the government.”

The Baudó region of Chocó Department has long been contested by armed groups seeking to control drug smuggling routes to the coast. While Chocó is among the poorest parts of the country, assistance from the central government is limited, and this state negligence has allowed various illegal armed groups, including the FARC, to control the area for decades. Its inhabitants, mostly Afro-descendants and indigenous Emberas, have seen the upper hand in the conflict swing from one armed group to another.

Currently, the ELN dominates the north of the region, while much of the south is controlled by the AGC.

The AGC is partly comprised of former members of paramilitary groups that were disbanded during a peace process that wrapped up in 2006 and resulted in the demobilisation of more than 30,000 paramilitary members throughout the country.

Like the current peace agreement with the FARC, the 2003 to 2006 peace process left out other armed groups and failed to stop a cycle of violence that largely revolves around the drug trade and continues to displace thousands of people every year.

In early March, for example, over 700 villagers, including more than 340 children, fled fighting in the municipality of Alto Baudó in northern Chocó.

A community member, who asked not to be named for security reasons, said he and others in the riverside village of Boca de León had heard gunshots in the distance. Shortly afterwards, rumours from Peñazul, a nearby village where the gunfight took place, reached them saying that the clash between ELN and AGC fighters was spreading up the river, closer to their villages.

“They [the AGC] think that we’re with the guerrillas, because this has been an ELN zone,” said Ornelio Forastero, a local Embera leader. “So we were worried that if we bumped into them, they would just kill us.” 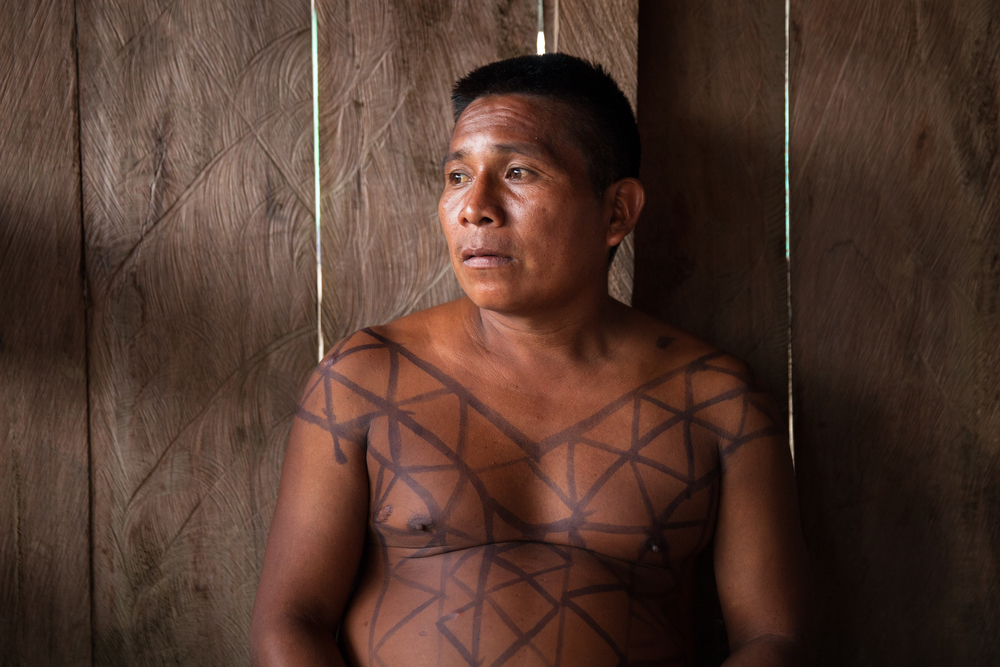 Erika Piñeros/IRIN
Ornelio Forastero: “We heard loud explosions, gunshots. We got scared and ran away; we went up the river and camped on the riverbank for days.”

The villagers travelled hours up-river to the municipality of Pie de Pató, where they stayed for some days before returning home.

Such temporary displacements continue to be common in many places in Colombia, including in this remote and roadless region where drug production and trafficking is the main industry, alongside illegal logging and mining.

In Alto Baudó, the local people are victims of the drug trade, but they have also come to rely on it.

Residents of Boca de León recalled that when men with guns began showing up in the region just over a decade ago, the offer of a new source of income was too good to turn down. Not only were they shown how to grow the coca plant, they were also trained on how to turn the coca leaves into paste.

“We grew up with our parents planting corn and plantain, but we had a bad life,” said a community member, who declined to be named. He said the villagers preferred the illegal armed groups to the government because “at least they buy the ‘merchandise’ from us”.

But the drug trade has left residents caught between the AGC and the ELN, according to a 7 June Human Rights Watch report that focused on Litoral de San Juan municipality, in the south of Chocó.

“As they dispute control over the San Juan river, these two armed groups have displaced hundreds of families and forced many others to confine themselves to their immediate villages,” said José Miguel Vivanco, Americas director for HRW, in a statement.

According to HRW, almost 3,000 people were displaced in 2016 in Litoral de San Juan, which has a total population of 15,000, while more than 1,300 people fled their homes in the first two months of 2017 alone. Other abuses included killings, assaults and the recruitment of children.

The ELN rejected HRW’s findings and issued a statement blaming the AGC and the Colombian government.

The HRW report noted that the abuses continue even as the government and the ELN engage in peace talks launched in February in Quito, the capital of neighbouring Ecuador.

Analysts argue that the ELN and other groups like the AGC have been closely watching the peace process between the government and the FARC, which concluded at the end of last year after initially being rejected in a nationwide referendum.

Many are critical of what they view as concessions to the FARC, which has been found guilty of numerous atrocities. The peace deal makes it unlikely that FARC members will be charged for their crimes, while the government and the international community are funding programmes to reintegrate former fighters into civilian life through the provision of vocational training, education, and business grants.

The ELN has been around almost as long as the FARC, and its members have committed similar crimes. Now, many observers believe the ELN wants to pressure the government into making a similar deal.

Manuel Palacios is the ombudsman for Medio Baudó, the municipality in Chocó Department where Pie de Pepé sits, near the banks of the Baudó River.

“They have seen the benefits they can get – release from prison, reduction of sentences, legal benefits, reintegration programmes, and all that,” he said. “It is an incentive to them.”

(TOP PHOTO: An Embera girl waits for transportation next to a policeman at Puerto Meluk in Bajo Baudó. Erika Piñeros/IRIN)