Amina screams as a nurse peels bandages off the lacerations and sores that cover her chest and left leg. Her aunt helps medical staff pin the 13-year-old down on a bed as the nurse squeezes puss from the infected wounds, before roughly rinsing them with iodine.

As armed forces fought for control of so-called Islamic State's last stronghold in Iraq, the teenager suffered multiple injuries when an airstrike intended for militants flattened her Mosul family home in December. Her mother, oldest brother, and three-month-old nephew were killed. Her father, 56-year-old Waleed, listens to his daughter’s cries of pain, his eyes welling up with tears. He recalls how the neighbours who pulled him, Amina, and his youngest son from the ruins could scarcely believe anyone survived the bombing.

After the airstrike, Amina’s wounds were patched at a field hospital. Her family had no painkillers to offer her and it was weeks before they could get her proper medical attention. When a temporary medical centre did open up in east Mosul’s al-Zahra neighbourhood, Amina and her father had to walk for nearly six hours to get there, with Amina in constant pain. That morning they joined hundreds of other desperate patients queuing at the doors of the makeshift emergency ward. After a few hours, they gained entry through doors medical staff keep locked to prevent the ward from being mobbed, letting through only a handful of patients at a time. 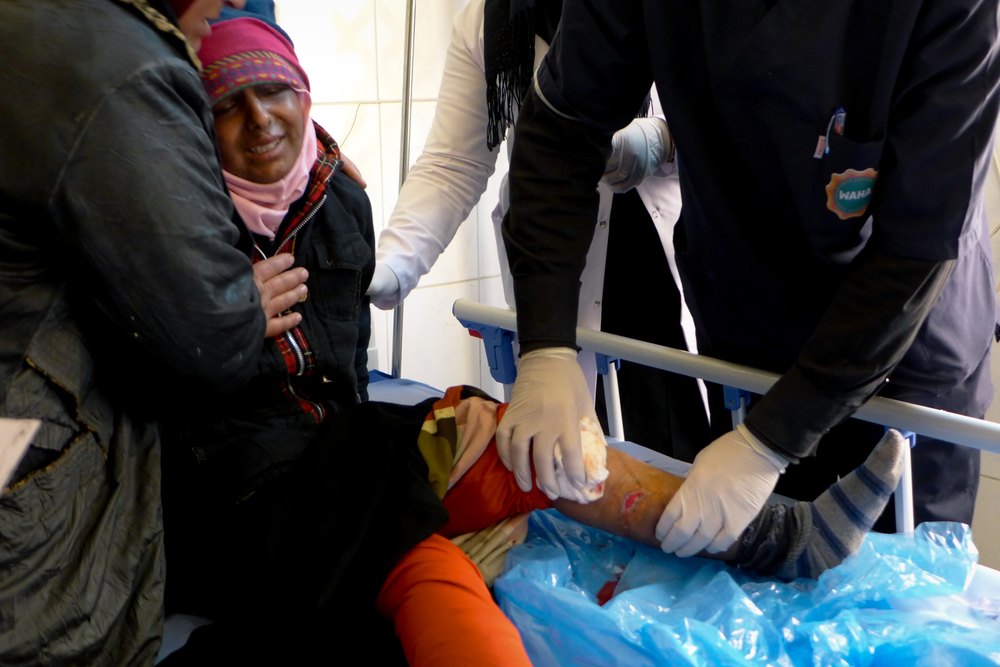 This clinic receives around 1,500 people every day. Many patients are children like Amina, who arrive with infected war injuries that have not healed properly after being patched up at poorly equipped field hospitals. And with much of eastern Mosul still without electricity or running water, the injured and post-surgical cases struggle to keep their wounds clean, impeding recovery.

Fighting and airstrikes eventually led to the liberation of east Mosul last month, but they left the city’s hospitals in ruins. Makeshift field hospitals and healthcare centres like the one in al-Zahra have since sprung up, but they are overwhelmed trying to treat the city’s sick and injured, and earlier in January the World Health Organization warned that trauma casualty rates remain high near frontline areas in the city.

Many ongoing medical problems are due to swiftly executed emergency operations that were not entirely successful, carried out during the fighting and now crying out for further treatment.

Ten-year-old Salah Hassan was injured in a mortar attack three months ago. He lies pale, thin, and silent on a hospital bed, waiting for medics to look at his roughly dressed intestinal injury.

“He is still in so much pain and urgently needs a second operation,” sobs his mother Suad. “Doctors told us to go to Erbil for the operation, but we can’t afford to make the journey. We don’t even have the money to buy him painkillers anymore.” 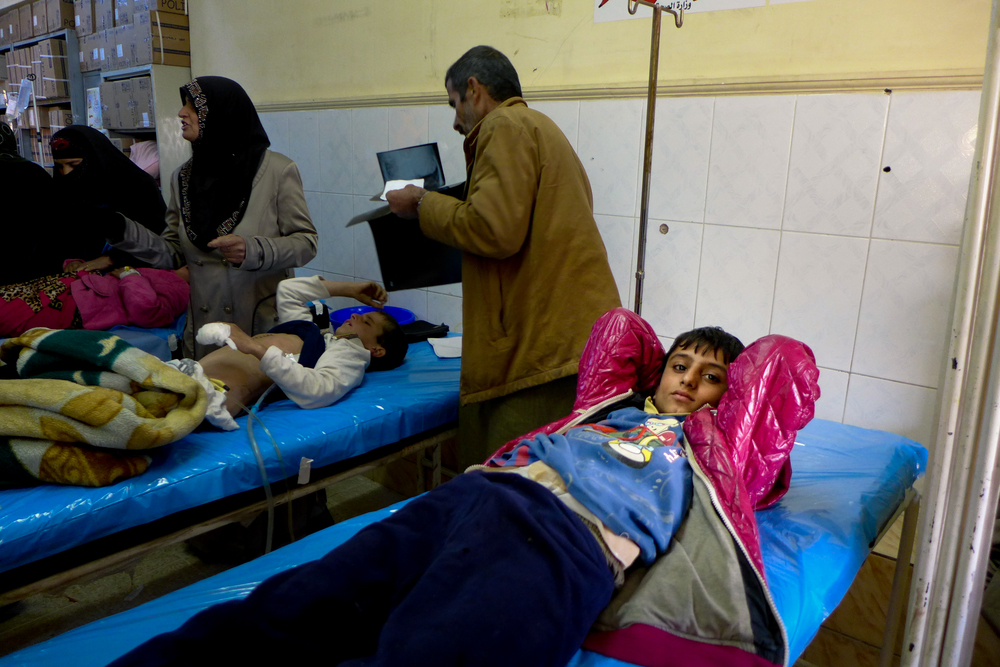 Superior medical facilities lie just 86 kilometres away in Iraqi Kurdistan’s de facto capital Erbil, and the UN reports that between 17 October and 25 January some 1,675 wounded civilians were sent to the city for trauma care.

But for many of Mosul’s sick and injured, Erbil is extremely difficult to reach. The Kurdish pershmerga military forces, concerned about former IS members sneaking across their borders, operate increasingly tough checkpoints on the road from Mosul. Many patients say they have been turned back, and those who do manage to pass say a frosty welcome awaits them.

“My son has an aneurysm in his groin from untreated shrapnel injuries. Doctors [in Mosul] warned he could die at any minute,” explains Wakan, 46.

He was told to take his 21-year-old son Younis – who has 17 shrapnel shards embedded in his legs – to Erbil. They made it, despite a four-hour delay at the first checkpoint. Current security procedures mean Mosul residents must leave their ID cards at that checkpoint, to ensure they return rather than staying on in Iraqi Kurdistan.

Without ID, the pair were turned away from the city’s hotels. “We slept on the street outside the hospital with others from Mosul and, in the morning, we discovered one man had died in the night. We think because it was so cold,” Wakan recalls. “The hospital then refused to treat my son because he had no ID card.”

They were sent back to Mosul with a box of painkillers.

Wakan says the doctor in Erbil suggested they returned in 15 days if the swelling didn’t subside, but he fears his son, who was injured two weeks ago, won’t survive that long if the aneurysm ruptures. “I’m going to sell my house and my car to make sure my son gets this operation [at a private facility which might overlook the requirement for ID],” he fumes. “I don’t know what else I can do.”

In another east Mosul district, Muharabeen, patients mob an ambulance as it pulls up outside Muharabeen Hospital, set up in a former orphanage, and wave slips of paper authorising them to travel to Erbil for treatment.

Twelve-year-old Mohamed stands silently in the crowd. He’s no stranger to the struggle for a seat in the ambulance. He has to complete it regularly, as he has leukaemia. While his parents can no longer afford the $30 injections he needs for treating his cancer, they have just enough to buy a bottle of blood for a transfusion in Erbil every three weeks. 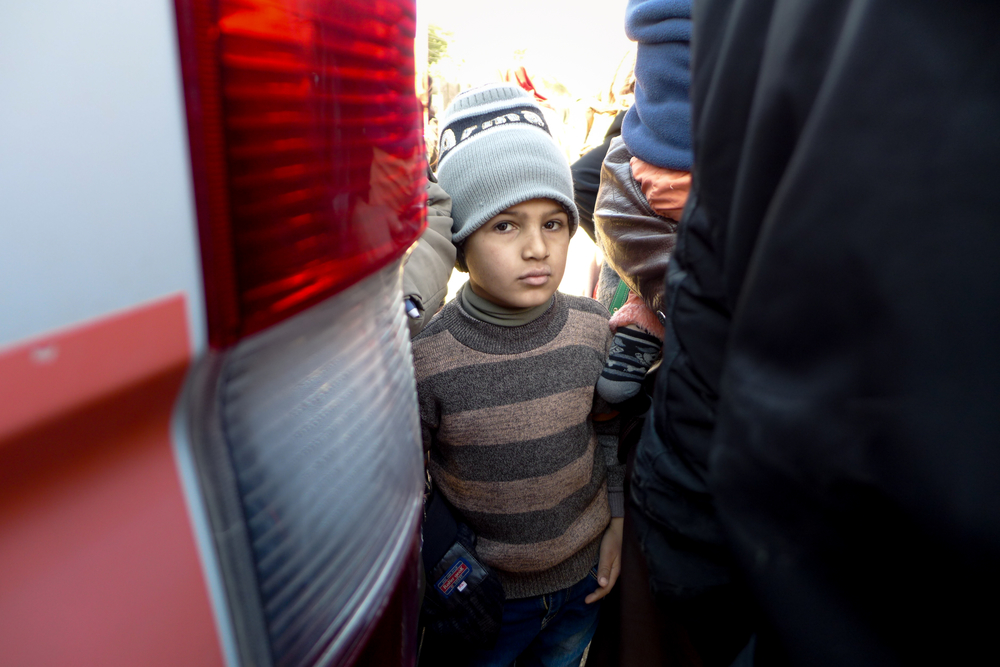 Ambulance driver Khalil Salem patiently explains to each family that the vehicle has mechanical problems. They will all have to wait for the centre’s one remaining functional ambulance to return from taking another group of patients to the peshmerga checkpoint, where they’ll be transferred to another ambulance. “Every day, there are too many people and [there’s] not enough space,” Salem sighs, shaking his head.

Even travelling in an ambulance with hospital authorisation doesn’t guarantee treatment. “The Kurdistan healthcare authorities are overloaded, so they don’t accept everyone. And [officials] also carry out their own [security] checks on each individual,” explains the general manager of Muharabeen Hospital, Doctor Mohammed S. Ali. “I don’t exactly know their policy, but we have no other option but to try to transfer patients to Erbil for treatments we cannot provide here.”

Although some international NGOs have been supporting Muharabeen Hospital with supplies for treating trauma wounds, they haven’t made up for the shortage of medicines for chronic diseases or everyday medical conditions, according to Doctor Ali.

“We are facing a miserable and desperate situation here,” he says, while signing and stamping scraps of paper to authorise transfers, operations, and prescriptions.

“On average, we are receiving 850 outpatients every day, 50 emergency cases, and between 20 and 30 new trauma injuries, mostly from mortars. We urgently need support and will accept help from anyone.”

Is help on the way?

Now that eastern Mosul has been liberated and is safer to work inside, Médecins Sans Frontières is helping medics at Muharabeen set up surgical and maternity units. These are still fairly rudimentary, with empty rooms being partitioned by wooden frames, across which grey plastic sheeting is stretched.

They might be basic, but obstetrician Doctor Anfal al-Sultani opens and closes the makeshift plastic doors with pride as she describes the planned layout of each room. The 31-year-old doctor believes these temporary surgical wards will make a big difference to her community. She says they’re expected to be ready to receive patients within the next few weeks, once new equipment arrives.

As needs intensify, other aid agencies have also said they are stepping up efforts in east Mosul – the WHO said it had set up a new 50-bed field hospital to deal with gunshot wounds and other emergencies.

But Doctor Ali, Muharabeen Hospital’s general manger, says surgical wards are not enough to address the general healthcare crisis for the civilian population in the city, particularly in the newly liberated areas.

Food shortages that began with the fight between Iraqi armed forces and IS in October have left local residents in a weakened and possibly malnourished state. Thanks to the subsequent destruction of infrastructure, most areas are without running water, electricity, or kerosene for heating. This means the hospital is receiving increasing numbers of cases of diarrhoea and gastroenteritis from those relying on water unfit for consumption.

Water is being trucked in, but Doctor Ali says it’s not enough. “Poorer families cannot afford to buy bottled water, so they have no choice but to drink the bad water,” he explains, turning away to deal with the crowd outside his door begging for help. “We just have to try to do our best to treat everyone we can.”