This article is part of our in-depth coverage. Read more like this...
This reporting is part of a special project that explores the impact of climate change on the food security and livelihoods of small-scale farmers in Kenya, Nigeria, Senegal and Zimbabwe
KAKAMEGA, Kenya

Agriculture is the most important sector of African economies, from the livelihoods it supports to the future jobs it can generate.

What is less appreciated is the key role played by agricultural extension workers. They link small-scale farmers to new research, helping to improve their knowledge and skills so they can take advantage of market opportunities. In African countries prone to climate shocks, these extension workers have an increasingly important role to play if farmers are to learn to adapt and build their resilience.

“The extension service provider’s role is enormous and urgent, especially as [the unpredictability of] climate change has brought a new dimension to agricultural research and development,” Max Olupot, of the African Forum for Agricultural Advisory Services, told IRIN.

In addition, Qureish Noordin, from the Alliance for a Green Revolution in Africa (AGRA), warned that climate variability is distorting “a huge portion of indigenous knowledge”, making the design of “realistic and practical adaptation programmes” even harder.

African agriculture, in general, is massively underfunded. In 2003, African governments agreed to the Maputo Declaration, committing 10 percent of spending to agriculture. But only 13 countries have ever managed to reach that target in any one year.

Two decades of IMF programming had pushed governments to cut spending, diminishing the reach and quality of the assistance provided to small-scale producers.

The UN’s Food and Agricultural Organization recommends there should be one extension worker for every 400 farmers. In the rich world, the ratio is roughly one to 200, but in Africa it’s closer to one to 3,000, according to Noordin.

Kenya has the largest, most diversified economy in East Africa, and farming is its market-driven mainstay. In 2010, it adopted a new constitution supposed to devolve significant powers to county governments.

But in reality, agricultural policy is still set at the national level and there is a complicated relationship with the counties over responsibilities for the day-to-day running and financing of services and programmes.

Kakamega is a lush county in western Kenya, a seven-hour drive from Nairobi. More than 80 percent of its population is directly employed in the agricultural sector.

The Kenyan government should be stepping up its help for farmers here, but since devolution there’s been a drop in the number of extension workers employed.

Currently, the ratio is roughly one to 3,000-5,000 farmers, according to Johnston Imbira, the county’s director of agriculture.

“The number has decreased due to officers retiring and exiting from the service since devolution,” Imbira told IRIN. “There are no deliberate efforts to support day-to-day extension delivery as it does not appeal to the county legislators compared to roads, which are visible to the electorate [and are a vote-winner].”

The county spends less than 4 percent on agriculture annually, despite the government’s 10 percent target.

“Expertise is dwindling,” said Jacob Masimba, an extension research liaison and training officer. “There is no regular short course training, even with climate change.” 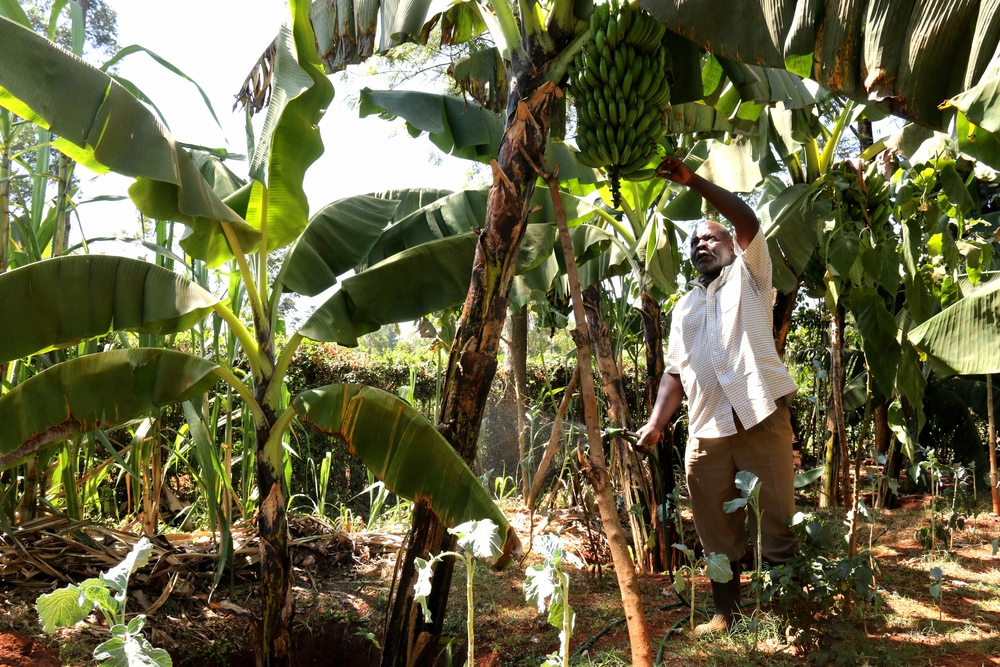 That’s bad news for farmers like Harrison Wesa, a 63-year-old retired teacher who grows bananas on his irrigated, half-hectare plot. “We used to have monthly visitations by government officers,” he told IRIN. “Today, you are lucky to be visited.”

Wesa was forced to abandon vegetable farming due to unpredictable rains and a rise in insect infestation. He soon found he was spending far too much on pesticides, pushed by agro-dealers out to turn a profit.

With losses mounting, his son introduced him to the internet, where he soon found plenty of websites on banana production. “My challenge [now] is too much information that at times confuses me,” he said.

Noordin recognised this problem well. “Even if some farmer can download some of the information, they might require help to interpret some of the messages,” he explained.

Smartphone use is spreading, but not all small-scale farmers can individually afford the data charges for downloading YouTube videos on the latest techniques, few of which are in Kiswahilli, the most broadly spoken language in Kenya.

But there are alternatives.

In many countries, extension services are going through profound change, out of necessity. What used to be a centrally controlled, top-down model is increasingly more participatory, farmer-led, and market-orientated.

Farm Africa is an international NGO that has been working with East African farming communities for decades. Its approach includes not only a farmer-to-farmer extension model in which “elite” farmers are trained and pass on the message to their peers, but also partnerships with the private sector.

“Public-private partnerships are a win-win,” he told IRIN. “The government is happy, as they know their goals will be delivered on; the private sector is happy, because they get the quality they need.”

Farm Africa has also tested mobile technology in Tanzania, with farmers viewing interactive training modules on tablet computers, as an alternative to traditional demonstration plots. It found that farmers trained using tablets were able to achieve similar increases in knowledge of sesame cultivation, but for about a third of the cost.

And old-fashioned radio still has a role to play, acting as a “megaphone” for extension work. Typically, farmers group themselves into listeners’ clubs and can call in or use SMS to participate in the FM programmes.

And while some governments don’t appear to be getting the message yet, Agriculture for Impact, an advocacy initiative, says a revitalised and expanded role for advisory and information services is now seen “as central to pro-poor agricultural growth”.