This article is part of our in-depth coverage. Read more like this...
MINAWAO, Cameroon

The Minawao refugee camp in the Far North Region, the poorest and least-developed province in Cameroon, is an inhospitable home for some 60,000 refugees of Nigeria’s Boko Haram conflict. A further 27,000 live precariously, often among struggling relatives and friends, closer to the insecure border.

Ayuba Fudama pulls up the sleeve of his T-shirt to reveal a bullet wound on his arm then hikes up the front and turns around to show yet more scars.

“One shot came through here, and went out there,” he says, pointing to a scar at the top of his chest, and the exit wound on his back, beneath his shoulder.

Fudama was shot a total of four times by Boko Haram militants during an attack on the village of Kawuri, in northeastern Nigeria in 2014. The raid left at least 52 people dead, and 300 homes destroyed.

“I was in the market when the Islamist terrorists hit. They killed eight people [in front of me], but I was able to run home. Unfortunately for me, some of them had got into our house and other houses in the village.”

He doesn’t remember much about being shot. It was some time in the afternoon. He thinks it was by two men. But he knows he was fortunate. He was rescued from dying in a pool of his own blood, finally getting to a hospital at 3 am.

“As soon as I was fairly recovered, I joined other Nigerians who were fleeing Boko Haram attacks [and running] into Cameroon,” Fudama said.

Fudama now lives in the Minawao refugee camp. The conditions for all refugees are tough. When Filippo Grandi, the high commissioner for the UN refugee agency, UNHCR, visited Minawao in December, he was met with a delegation that presented a list of grievances.

They included complaints over insufficient food, water, and firewood. They criticised the lack of adequate health care, overcrowded classrooms, and the need for more clothes and blankets.

Minawao, 70 kilometres from the border, is arid and rocky. Forty-one percent of the camp’s population are “food insecure”, meaning they lack reliable access to enough food. The availability of land around Minawao is limited, so it’s hard to cultivate to supplement rations.

UNHCR acknowledges the problems. In its Regional Refugee Response Plan for 2017, it notes that the camp operates at “three times its maximum capacity and the resulting congestion makes providing assistance in a manner aligned with international humanitarian standards, a key challenge”.

There is, for example, no psychosocial support for refugees who have been the victims of Boko Haram violence, and child protection and gender-based violence mechanisms are weak. 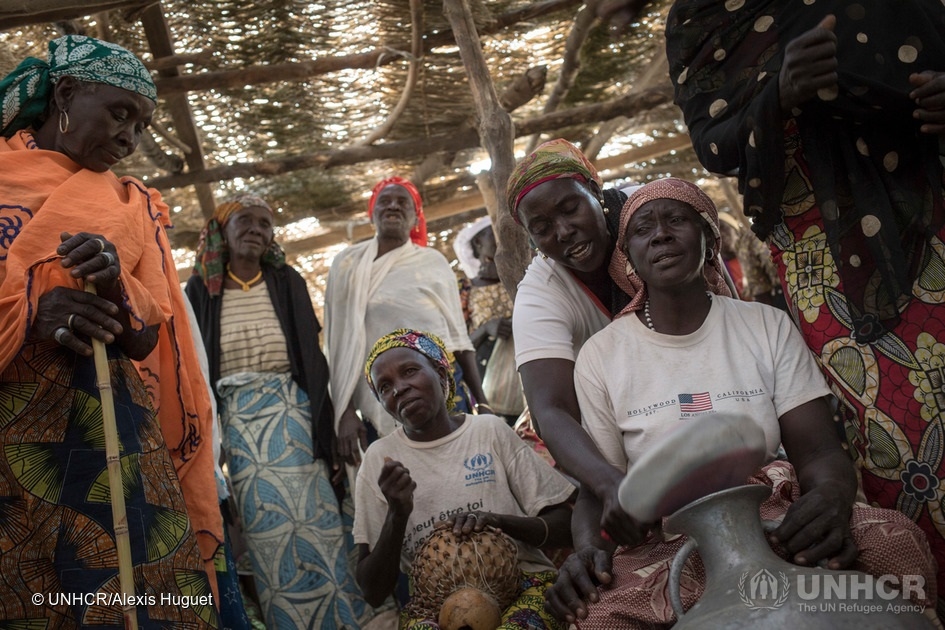 UNHCR is also aware of the frustration of the refugees over a government policy that prevents them from moving freely out of the camp to find work in the local economy.

“We are living in the desert, and finding food, wood, and water sources is very difficult, but we don’t want to fold our arms and depend on donations,” says Bulus Musa, who fled Nigeria because members of his own family had joined Boko Haram.

Cameroon’s strict encampment policy is due to very real security concerns. Since March 2014, Boko Haram violence has spilled across the border, with hundreds of attacks in the Far North Region that have killed 1,500 people and displaced 155,000, according to a November report by the International Crisis Group.

That has not only compromised access to refugees living outside the camp, but the perception that refugees could be sympathetic to Boko Haram, “has sometimes impeded their access to asylum and affected screenings and status determination procedures”, says UNHCR.

In a survey by the agency in September, 71 percent of refugees said they were ready to go home. Those hesitating are largely from the remote and at-risk Nigerian border regions of Bama and Gwoza, which also lack basic services.

Tens of thousands of refugees have already voluntarily returned. There have also been deportations by the Cameroonian government.  A tripartite agreement is being negotiated between Nigeria, Cameroon, and the UNHCR for a managed, formal, return process.

Is the war over?

But mass repatriation hinges on the security situation. The Nigerian government insists that Boko Haram no longer holds any territory, although it can still launch hit-and-run attacks. The turn of the military tide is the result of a revamped Nigerian military, and the intervention of regional partners in a Multinational Joint Task Force composed of troops from Cameroon, Chad, and Niger. Boko Haram violence has forced more than 2.6 million people to flee their homes across the region.

Colonel Didier Badjeck, spokesman for Cameroon’s ministry of defence, believes the war against the jihadists is almost over. That is despite a suicide bomb attack on the northern town of Mora on Christmas Day, and two recent attacks in the border town of Kolofata.

“We are at the level of trying to completely eradicate [their] remnants,” he told IRIN. “The big problem now is that of handling refugees till it is completely safe to escort them back home.”

But he worries that the conditions of the refugees in Minawao could help in their recruitment to the insurgency.

"The Cameroonian government’s focus on a military response has been partly successful, but the structural problems that allowed this threat to arise have not been addressed"

“The help being given to refugees by donors is far below expectation,” he said. “Poverty and hardship would make these refugees vulnerable and they may easily be recruited by Boko Haram.”

According to the ICG, Boko Haram has been able to operate in the Far North Region through a network of local collaborators (there is an ethnic and cultural affinity with Nigeria’s northeast) and by exploiting local grievances over the region’s marginalisation by the government of Paul Biya, who has ruled for 34 years.

“The Cameroonian government’s focus on a military response has been partly successful, but the structural problems that allowed this threat to arise have not been addressed,” the report said.

The danger is not that the refugees are potential fifth columnists. The real threat, notes the ICG, comes from the absence of a government “hearts-and-minds” strategy in the region; to tackle head on inequality, and the ideological challenge that violent extremism represents.