In the wake of the shock referendum result earlier this month that derailed the peace agreement between the government and the Revolutionary Armed Forces of Colombia (FARC), city-dwelling Colombians are pressuring the government to salvage the deal. But coca leaf growers in rural areas whose livelihoods are threatened by plans to demobilise FARC are breathing a sigh of relief.

“If the ‘yes’ had won, we’d be screwed by now,” Miguel, a cocalero (coca grower) from Tierralta in the northern department of Córdoba, told IRIN.

Along with the food he grows for his family to eat, Miguel cultivates coca to make ends meet. His main buyers are the same FARC militants who would have to relocate to a designated ‘normalisation zone’ in the neighbouring village of Gallo if a new peace deal is reached. Not only would Miguel lose the market for his coca crop, but during the disarmament period the area would be awash with soldiers, police, and international observers who would be on the look-out for illicit activities.

“We’re not criminals. We’re just campesinos trying to make a living,” insisted Jaime, another cocalero from the area, which has long been a conflict zone for warring leftist and right-wing armed groups.

The FARC has sustained itself for years using profits from various illegal activities including kidnapping, extortion, and illegal mining. But by far their largest source of revenue has been the cocaine trade. According to an August article by InSight Crime, the FARC control up to 70 percent of coca crops in the country. The rebels trade coca base and export cocaine, earning an estimated $450 million a year, according to a recently published book by two Colombian journalists who investigated the FARC’s finances.

One of the key elements of any new peace agreement will be a commitment by the FARC to break its links with all illegal activities, including drug trafficking. But few believe that a peace deal will end Colombia’s lucrative drug trade.

Jaime commented that coca production might become difficult if the FARC demobilises, but that it would never stop. “There will always be another buyer, because when one [illegal group] leaves, another one arrives.”

Integral to Colombia’s attempts to combat the illicit drug trade since the early 1980s has been a system of crop substitution programmes. Launching a new initiative in 2015, President Juan Manuel Santos mentioned benefits such as financial and technical support to start growing legal crops, as well as new roads, schools, and health facilities for the communities involved. The government is seeking support from the international community to boost such programmes in the wake of a successful peace deal.

Coca production has nevertheless been increasing in recent years. In 2015, land used for growing coca increased by nearly 40 percent according to the UN’s Office on Drugs and Crime, UNODC, double the area used for coca production in 2012 and 2013.

Colombia’s post-conflict minister, Rafael Pardo, blamed climate change and the stronger dollar for the steep rise, but acknowledged that the government’s decision to reduce and eventually suspend aerial fumigation of illegal crops may also have played a role.

Others suggest that the increase in coca production is the result of the FARC’s efforts to step up coca cultivation in order to obtain more benefits from eradication programmes during the post-conflict period.

Almost two weeks after the plebiscite took place, government officials held a meeting in Tierralta about the crop-substitution programme with more than 60 community leaders and cocaleros.

“Córdoba is the department in Colombia where illicit crops increased the second most last year. They grew by 143 percent!” said government official Rafael Muñoz to a mistrustful audience. “Is this something we can be proud of?”

“They should have come a long time ago,” muttered Miguel. Others fired questions at the government officials: “Is my land suitable for the proposed crops? What if I don’t have land titles? How will we support ourselves until the trees bear fruit? What if production fails?” 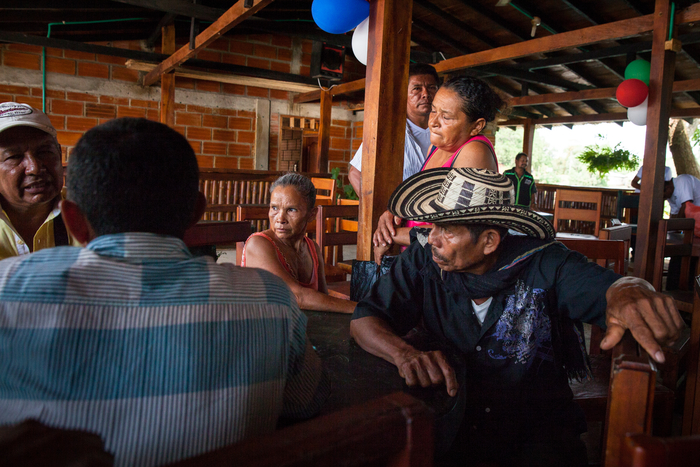 Aquiles, a 41-year-old community leader from the region, said the government had broken its promises of bringing services like roads, health centres and solar panels before. “But it won’t happen this time. We’re organised now.”

He pointed out that community members had repeatedly managed to stop manual eradication teams from entering the area.

Mario, 31, has been working in the coca trade since he was 14. He now manages a makeshift laboratory – a ‘caleta’ – where he and his younger brother, Juan, convert coca into coca paste by cutting up the coca leaves and mixing them with cement, ammonia and gasoline in metal drums.

“With this, we can educate our children, buy them food and clothes, give them health, and there’s even a little bit left for us,” Mario explained, while his little girl played on the coca leaves. 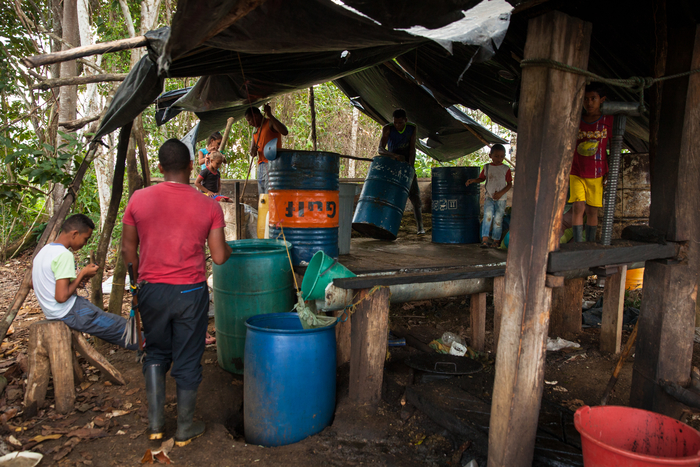 Erika Piñeros/IRIN
At a ‘caleta’ hidden in the bush near Tierralta, Mario and his brother Juan mix coca leaves with ammonia and cement, before filling metal drums with the mixture and then adding gasoline

The cocaleros complain that the government is more concerned about ridding the area of coca than helping them find alternative livelihoods or delivering basic services such as healthcare and running water.  Despite the proximity of a large power plant, many villages in the area still don’t have electricity.

Tierralta’s residents claim they started cultivating coca after the power plant built a dam in the early 1990s that flooded a 7,400-hectare area, engulfing their farms. Their houses had to be rebuilt uphill, away from the water.

While they received some compensation, the money soon ran out. Their attempts to farm banana, corn, and the other crops they used to grow in the flatlands failed due to the poorer soil in the hills.

Coca, on the other hand, grew well and could be harvested three or four times per year. Transportation to nearby buyers wasn’t a problem either.

A 12.5-kilo bag of coca leaves can be sold to the nearest caleta for 25,000 pesos ($8.30). Once processed, a kilo of coca base sells for 100 times that amount to a middleman in the village who then sells it on to local guerrilla or paramilitary groups.

By contrast, substitution crops such as cacao don’t bear fruit for the first three to five years and are expensive to transport to buyers because of the lack of roads in the region.

It’s not only the cocaleros who are worried. In many of Colombia’s most remote areas, the coca business is fuelling almost the entire local economy.

Drinking a beer in a crowded canteen in Tierralta, Carlos, who pilots a river boat, pointed to the other customers: “You see? There’s money flowing here right now.”

Carlos is not directly involved in the coca business, but like many others in the region, he makes a living from those who are. Every day, along with the passengers he carries up and down the river, he brings the necessary supplies to grow and process coca. “What will happen to us if they go out of business?” he asked. 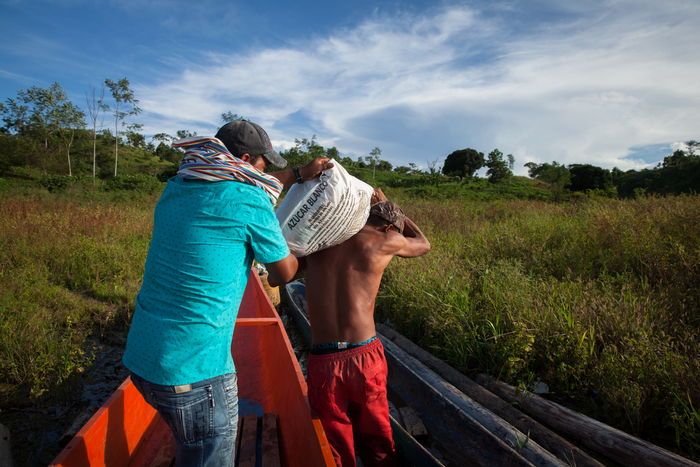 The cocaleros know they don’t have much choice but to join the government’s programme, but they say they will fight to get the best possible deal for themselves and their families.

Community leaders argue that cocaleros should be given fair compensation for their existing crops, and that the government must guarantee technical and financial support until substitution crops are successfully harvested and brought to market. They complain that until now, the government has provided only a start-up package and no follow-up support to growers who sign up for the programme.

“We are tired of being tricked. They [the government] are the ones who don’t want to make things work, but they can,” said Aquiles.

* Names have been changed to protect identities