Read about what we achieved.
ELEGU, UGANDA

Uganda has received 30,000 refugees in just three weeks and reception facilities are overflowing. Recent fighting in South Sudan has caused a new wave of arrivals, putting pressure on its southern neighbour, which was already hosting half a million refugees.

“The new refugee influx of South Sudan refugees is a huge burden to the government. We are constrained in terms of providing social services to these new refugees,” Titus Jogo, a refugee official at the Ugandan prime minister’s office, told IRIN. “We are looking for additional resources to provide them with social services like medical care, water, shelter and other basic necessities.”

By early December 2015, Uganda had become home to almost 511,000 refugees and asylum seekers, making it the third largest refugee-hosting country in Africa, after Ethiopia and Kenya.

As of 24 July, more than 30,000 refugees had crossed into Uganda to flee uncertainty and fighting in South Sudan between government troops of President Salva Kiir and forces loyal to First Vice President Riek Machar. Humanitarian agencies say the sudden influx has severely stretched the resources and capacity of refugee collection points, transit centres and reception centres in the northwestern part of the country.

I have been trying to call my dad’s telephone number, but it has been off.

"At the time when the fighting started in Juba, my brother and I were playing with our friends. We heard bullets. We all got confused. I held my brother’s hand and told him to run. There was no way we could go back home. I don’t know whether our parents are alive or dead. I have been trying to call my dad’s telephone number, but it has been off. I don’t know what could be the problem? I still don’t know what caused the fight. We spent two days running and walking to Jabelem. We were so tired.
I thought we would have some rest at Jabelem. But it was unfortunate. It was another terrible experience and nightmare. The day when we arrived there the soldiers started shooting and beating people. We had no option but to hit the road again, running. We had no food to eat. We spent another two good days to get Gore. My younger brother was tired and kept crying. I kept encouraging him, for us to move for our own safety and security.
As we were stranded, some driver helped us out. He put us in his car and dropped us in Nimule. We walked from Nimule to here [Elegu] on foot. My legs are in pain. I am hungry. I haven’t eaten. I have nothing to give my brother. I don’t know who is going to help us out when we reach the settlement. I don’t know how we can get in touch with our parents.
We hear there is still some fighting in Juba. I hope the fighting will stop so that we [can] go back home and study."

“Our collection points and reception centres are severely over capacity. This is a significant challenge as we've received nearly as many refugees in the last week as we had done in the first six months of 2016,” Charles Yaxley, associate external relations officer at the UN refugee agency, UNHCR, told IRIN.

On 22 July, when IRIN visited Elegu collection point on the South Sudan-Uganda border, it had more than 10,000, ten times its 1,000 person capacity. Heavy rains were further hampering registration efforts.

The sanitation is poor and the site is littered with garbage. The pit latrines can’t handle the numbers, forcing thousands to defecate in the open nearby.

“The situation is much worse: alarming and appalling. The numbers are overwhelming. Yet the number of humanitarian agencies on the ground to provide critical aid is small,” John Bosco Komakech, executive director of the Catholic charity Caritas in Gulu archdiocese, told IRIN at Elegu.

“The influx was not expected to be this big and, as it stands now, it has burst the resources available, especially at Elegu refugee collection point,” Justine Abenaitwe, humanitarian manager for Save the Children Uganda, told IRIN.

The visibly tired and hungry children and women, who compose 90 percent of the new influx, said they had only received biscuits provided by humanitarian agencies. 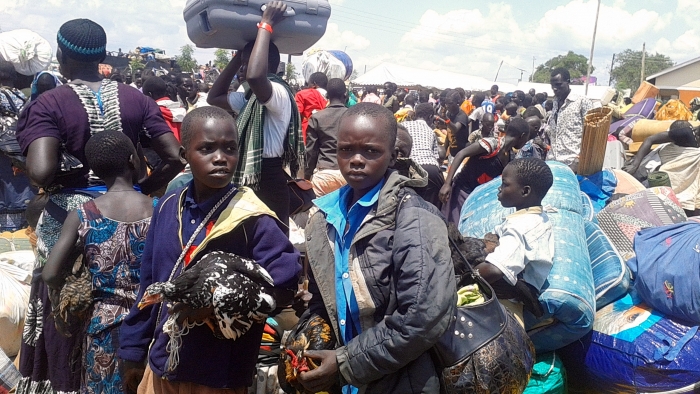 “The children are crying for food to eat, but we can’t provide anything,” Jovin Bako, a refugee  from Torit in South Sudan’s Eastern Equatoria State, told IRIN. “We are tired of running. We appeal to President Kiir and his vice [president] to consider the plight and suffering of the innocent civilians. We need peace and security in our country. We are tired of violence and war,” she said.

Nyumanzi transit centre in Uganda’s northwestern district of Adjumani was built in early 2014 to hold some 2,000 people for no more than two weeks. It now has more than 20,000 refugees. Kuluba collection point is hosting about 1,500 refugees, compared to its 300-person capacity.

I can’t do anything to stop the fighting. 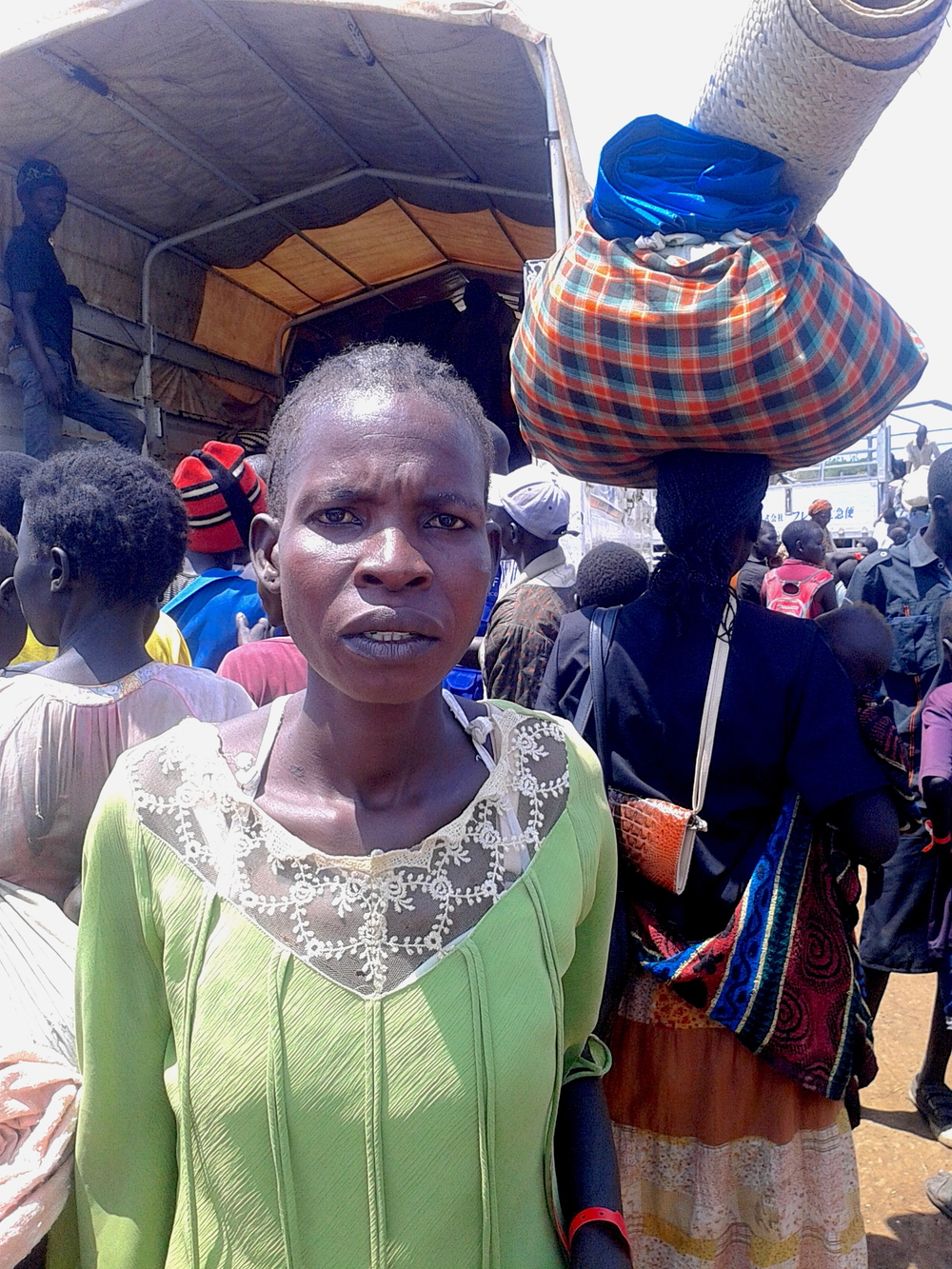 Last week, the Ugandan government and UNHCR evaluated a number of potential new sites for longer-term settlement as well as new collection points.

“The Adjumani settlement is full. We are planning to reopen one settlement in Yumbe, which last operated in 1990, in the next 45 days. This is now a new place where we don’t have any structures and services at all,” Jogo told IRIN.

“It will require us to put up all the social services like water, shelter, setting up of health facilities, drilling boreholes, pit latrines and constructing structures for security personnel. This will require additional logistics and financial resources, which we don’t have at the moment.”

UNHCR too is seeking funding: it has revised its appeal for the South Sudan refugee operation, seeking $701 million. The earlier appeal for $638 million was only 17 percent funded.

How can I manage these children alone? Where could my husband be?"

"When shall we ever have peace in South Sudan? I am tired of running and being a refugee. Every time it’s war and violence. I came here because of the disturbance, fighting and killing of people. Since the unrest broke out on 7 July, we couldn’t remain home. We had to run for our dear lives. Some gunmen took advantage of the fighting in Juba and started killing people in our village. Some children and youths were being forcefully taken. I couldn’t handle the situation. I decided to flee with my six children. I can’t locate my husband. He took off and left us behind. He didn’t bother to help me with the children. How can I manage these children alone? Where could my husband be?"