Drought-prone southern Madagascar is facing yet another food emergency this year. An unusually strong El Niño season means the rains have failed once more. Prices in local markets have skyrocketed, leaving more than 665,000 people in urgent need of food aid.

This giant Indian Ocean island is one of the most vulnerable countries in the world to natural disaster. Madagascar’s semi-arid, deep southern regions of Androy, Anosy, and Atsimo Andrefana have faced emergencies year upon year. The recent El Niño has just made an already bad situation worse.

Dami is nearly three years old but weighs only 6.9 kilograms. Underneath his dusty white t-shirt and blue shorts, his limbs are about the size of a carrot but his belly is swollen: a sure sign of malnutrition.

He sucks on a sachet of high-energy Plumpy’Nut, a peanut-based, ready-to-eat food. When he fumbles and drops the packet on the ground, his sister snatches it up and chews at it: she is also hungry.

The current drought, one of the worst seen, has scorched rice and cassava crops, leaving 80 percent of people without a secure food supply. Many agrarian communities are now reliant on food aid – and cacti.

“This drought is the worst I have ever seen. Last year, there was drought, but we had some rain. But this year there has been almost nothing”

The red fruit of the cacti is an emergency food in the south, but they are hard to digest and can cause bowel problems that exacerbate the effects of malnutrition.

Dami is one of eight children born to 38-year-old Ambahinky Kazy, who is poor and struggles to find work. She wants her children to become teachers, but none of them have been to school.

Dami was given the Plumpy’Nut following a UNICEF screening in Ambondro village, in Androy region. The examination found his mid-upper arm circumference was just 10 centimetres: in the danger zone.

It takes up to 90 sachets of Plumpy’Nut for a child to recover, but this is made difficult as families often regard the “medicine” as food, sharing it out among other hungry siblings.

Kazy has been in and out of the UNICEF programme with her different children over a period of four years, a fact that underlines the region’s unrelenting poverty.

Nearly one million children in Madagascar suffer from acute malnutrition, and the island nation has one of the highest rates of under-five stunting in the world.

The malnutrition crisis is the main health issue for the government, according to Health Minister Mamy Lalatiana Andriamanarivo. It “continues to be alarming for us, especially in the south”, he said.

While the government says it considers tackling the food crisis a priority, its efforts are stifled by poor funding (much of the health budget is reliant on foreign aid) and implementation issues. It has made little progress in building resilience in communities vulnerable to climatic shocks, and infrastructure is crumbling: more roads are lost than are built each year. 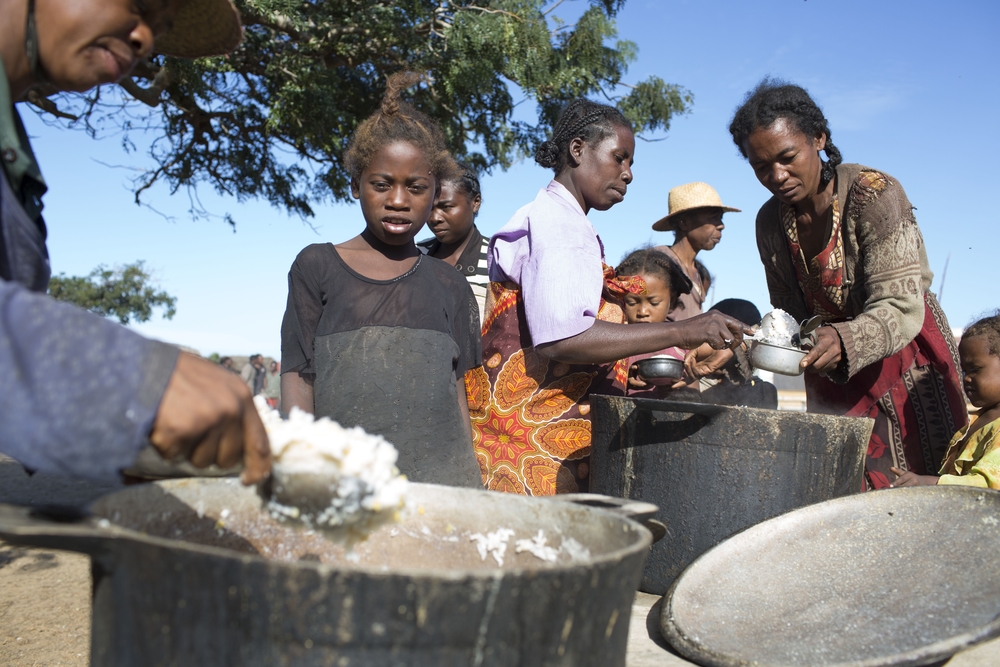 “I always worry, every day,” said Damy Miarorala, the mayor of Ambondro. “This drought is the worst I have ever seen. Last year, there was drought, but we had some rain. But this year there has been almost nothing.”

There were deaths last year - especially among children - due to malnutrition, and reports again this year that people are succumbing.

“My worst worry is the deaths from people not eating. Some people are eating the red cactus, which is bad for their health,” said Miarorala.

The mayor’s friend, Malafeno, laughed when asked if he was hungry, and showed off his baggy clothes. When the clothes fitted properly, he weighed 90 kilograms. Now, he is down to just 63.

It’s hard for Madagascar to get the help it needs as it’s “a bit lost in the ocean”, explained Willem van Milink, the country’s WFP representative.

Madagascar is “off the map” and forgotten by the international community, say aid workers. Its food crisis is grinding and constantly severe but lacks the dramatic numbers or cataclysmic event needed to gain significant relief and development attention from donors.

“We have nothing left to grab on to ...We are just waiting for death to come”

Yet, the drought is likely already a symptom of one of the most pressing global issues: climate change.

Rains have not fallen as they should for five years, according to Chief Voasaotsy of Anjampaly village in the Tsihombe district. A hailstorm in 2010 destroyed their crop of maize, sweet potatoes, and watermelon. The soil then became less fertile and the harvest has not recovered since.

“We have nothing left to grab on to,” said Voasaotsy. He scraped the spines off a cactus leaf and bit into it, demonstrating how the villagers eat, outside of their once-daily ration of maize delivered by WFP.

His desperation was evident as he explained how the villagers had to sell their property and livestock to buy food, which they used to grow themselves. Half the village has migrated, moving north. The remaining half cannot sell their land as everyone wants to leave. At least five people have died of hunger.

“Our life is waiting upon the rain,” Voasaotsy continued.  “But we are hopeless. We are just waiting for death to come.”