Read about what we achieved.
GOZ BEIDA

The Darfur conflict fell out of the headlines years ago, but more than 300,000 Sudanese are still living as refugees in neighbouring Chad, a country with its own problems of poverty, climate change, and insecurity. As humanitarian aid has dried up, how are they surviving in this harsh, arid setting?

At first sight, nothing distinguishes Djabal refugee camp from surrounding towns and villages, except perhaps the billboards along the main road promoting various international aid organisations. This sprawling settlement of huts near the town of Goz Beida in eastern Chad’s Sila Region is home to some 20,000 Sudanese who fled war-ravaged West Darfur in the early 2000s.

The camp’s marketplace is as busy and colourful as any local market. Vegetable stalls offer tomatoes, carrots and onions, and butchers slice and hack at pieces of fresh meat displayed on wooden table tops.  Across the street, barbers attend to their customers in a makeshift shop, and a teenager behind a laptop offers to download pirated songs. He also sells petrol in plastic bottles, cigarettes, mobile phone credits, and can recharge a mobile phone battery for a modest fee. 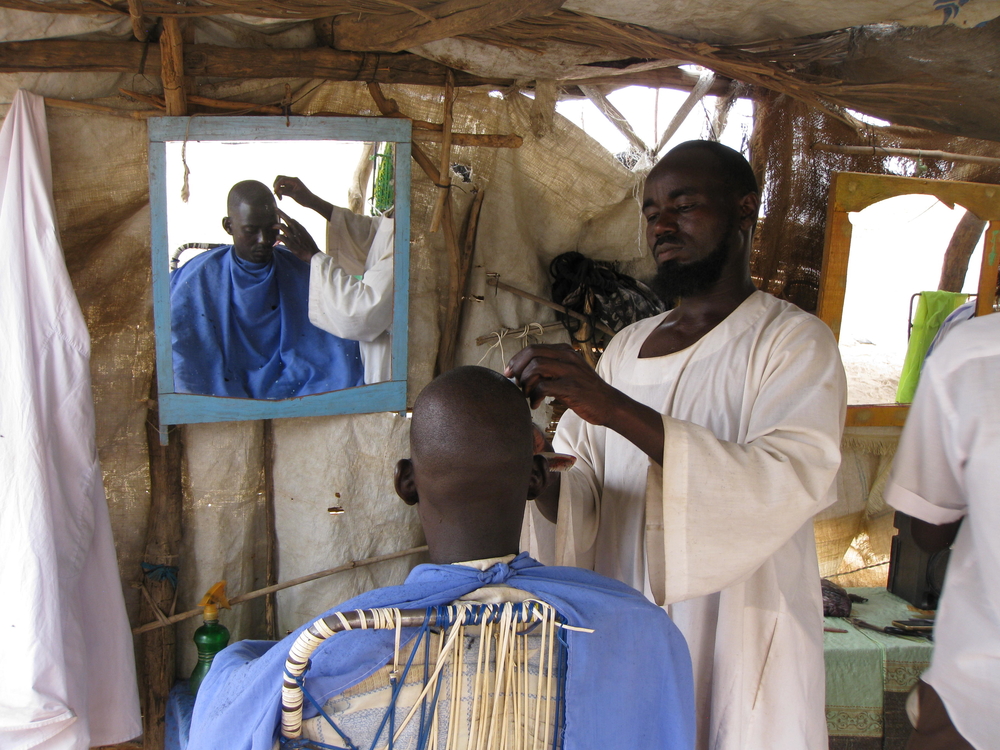 However, beneath this veneer of normalcy is a protracted displacement crisis that the humanitarian aid system seems to have forgotten about as it deals with more pressing emergencies.

The refugees of Djabal represent just a fraction of the 304,650 Darfur refugees living in eastern Chad (in the south, the country hosts another 74,000 refugees from Central African Republic and Nigeria). Sila Region alone hosts 62,000 refugees, in three camps – Djabal, Goz Amir, and Kirfi – that have been running for more than a decade.

Jenada Boldadet, a local prefect dressed in a traditional white robe, said the camps are putting a huge strain on this poor, sparsely populated region. He gave IRIN an avalanche of figures and statistics to explain the impact the refugees have had. For example, he said Goz Beida’s water supply system, designed to cater for 7,000 people in the regional capital, has struggled to cope with the additional demand.

The aid agencies providing for most of the refugees’ basic needs over the past 12 years have challenges of their own. With dwindling funding available from donors preoccupied by newer emergencies, they have had to take tough decisions.

By the end of April, UN refugee agency (UNHCR) operations in Chad were only 16 percent-funded for the year. Lack of funds has forced the World Food Programme to cut monthly food rations by as much as 60 percent since 2014. Food is now distributed based on four categories of need, ranging from the very needy to the relatively well-off. The very poor receive 70 percent of the previous full ration of 2,100 calories a day, while the less needy receive only 40 percent of a full ration. More cuts to these already meagre rations may be on the way.

Mary-Ellen McGroarty, WFP’s country director for Chad, told IRIN that the agency was in urgent need of $17 million for its refugee assistance programmes in the country. “WFP needs to pre-position large quantities of food stocks for the refugees in advance of the rainy season as many of the refugee camps become inaccessible for trucks from June onwards,” she said. “WFP faces significant funding shortfalls to complete this exercise.”

With little prospect of refugees being able to return to Sudan anytime soon and funding drying up, UNHCR and its partners have little choice but to push the refugees towards being largely self-reliant.

“The way UNHCR and partners have been delivering assistance has entrenched a dependency mentality that we need to work on now if we’re going to give them the capacity to fend for themselves and be self-sustaining,” the UN agency’s representative in Chad, Antonio Canhandula, told IRIN.

He added that the task was not made easier by the region’s arid environment and the struggles that even local people face in finding livelihoods.

Last July, Refugees International released a report that was highly critical of the aid system’s lack of support for Sudanese refugees in Chad to move towards self-sufficiency and local integration.

“It is unrealistic to expect refugees to become self-sufficient in a place where livelihood opportunities are hard to find, government services are limited, cost of living is high, host community tensions are increasing, and most crucially, little development funding exists,” wrote the authors.

A year later, there is evidence that some of the refugees, eager to improve their living conditions, are making their own way. Those with personal contacts in nearby villages have persuaded traditional chiefs to grant them land to cultivate. The village of Koutoufou for example, offered some refugees from Djabal parcels of arable land for farming.

Starting in 2014, refugees and villagers organised themselves into a farming association, or “groupement”, which receives funding from UNHCR in partnership with the Lutheran World Federation. LWF provides agriculture kits – seeds, farming tools, water pumping generators and fences – as well as technical assistance. The project is boosting the income of the villagers and helping refugees integrate into the local community.

Koutoufou, which had just 60 inhabitants before, has seen its population more than double with the arrival of the refugees. “We are much better today,” said Mahamat Zene Youssouf, a villager whose annual income has soared since joining the association, from around 15,000 CFA francs ($26) to about 75,000 ($130).

Sidikh Djimet Idriss, 25, who arrived at Djabal camp when he was just 13, joined the association two years ago. Since then, he has married and had a child. He told IRIN he worries less about his own future than about how he’ll ensure his child gets the education he didn’t. His hope is to attend a vocational training school like the one set up by LWF in Djabal. 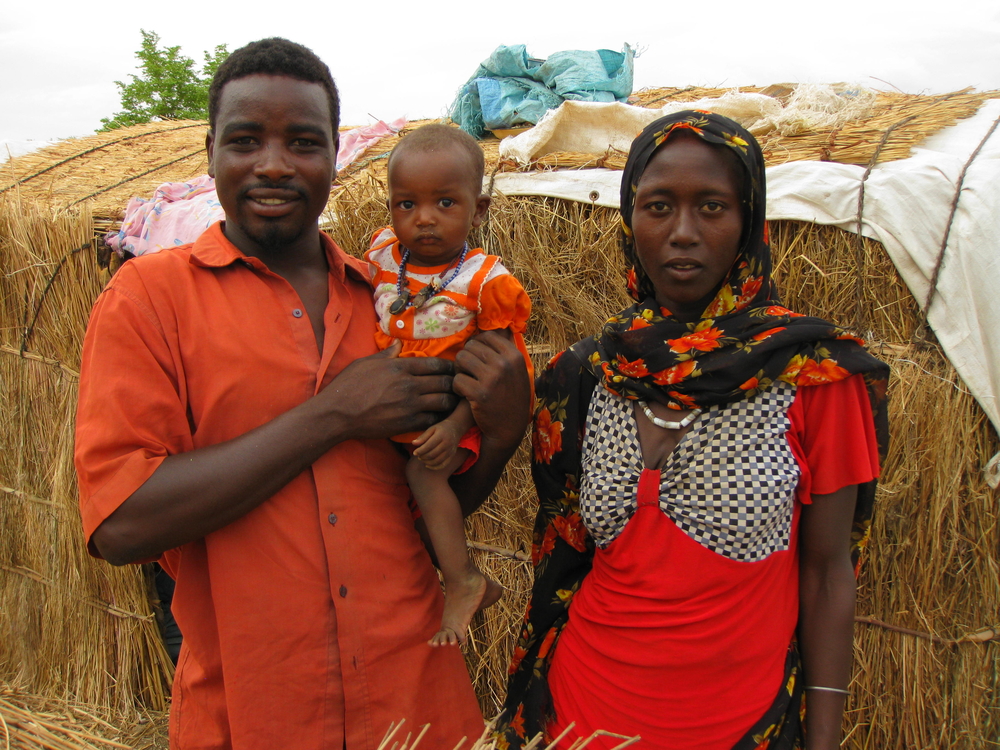 Mahamat Adamou
Sidikh Djimet Idriss, 25, joined a farming association in a village near refugee camp two years ago and can now support his wife and child

In operation since 2006, the centre has trained around 2,000 refugees and local Chadians in trades ranging from construction, carpentry, soldering, mechanics and electricity, to agriculture. The course initially lasted nine months but has had to be reduced to six due to funding shortages, explained Khamis Barka, head of the training centre.

But such initiatives are only benefitting a minority of the refugees. Others compete for occasional casual work in Goz Beida and surrounding villages. Job opportunities are few and far between in this drought-prone region, where many of the local Chadians are themselves in need of food assistance.

Abdallah Djouma, 58, lives at Djabal camp with his wife and four children. He earns a few dollars a day reselling goods he buys from traders at local markets. He also farms a small plot of land. “Last year was bad,” he told IRIN. “We didn’t have sufficient rain.”

“I am not an idle man,” he added. “I always manage to get extra revenue to take care of our basic needs.”

Without that extra income, the family would not survive. “The reduced rations are far from sufficient to cover our everyday needs,” he said.

The reality is that aid agencies like UNHCR cannot provide for the refugees’ needs in the long term. “People see us as a development body, but we are just an emergency aid agency,” commented Peggy Pentshi-a-Maneng, head of UNHCR operations in Goz Beida.

After 12 years, the Darfur refugees can no longer be considered as an emergency case, said Canhandula, the UNHCR country head, adding that they should be seen as part of the broader development challenges facing their host country. “I think more attention needs to be paid… to what 400,000 refugees represent to the government of Chad, because it’s a country that’s quite poor, where the standards of living, health, water, and education are very low.

“There should be solidarity with the government of Chad.”