Read about what we achieved.
ATHENS

The new residents of the City Plaza Hotel in downtown Athens can check out any time they like but, for now at least, they cannot leave Greece.

While borders across the Balkans slammed shut in March, trapping more than 54,000 migrants and refugees in Greece, a network of radical Greek academics, activists and citizens were busy seizing this long-abandoned hotel to create a co-operative refuge for hundreds of families, many of them women and children.

Greece’s stranded refugees are scattered far and wide, from the isolated slopes of Mount Olympus near Macedonia, to dusty old military barracks by the Ionian Sea, to wind-buffeted tents at the port of Piraeus in the south. More than 8,200 are on the Aegean islands, most of them locked in squalid detention centres as per the terms of the EU-Turkey deal that will see the majority eventually deported back to Turkey, and an uncertain fate.

By contrast, City Plaza, an off-white seven-storey building with jutting balconies, provides clean, en suite rooms for up to 400 refugees with regular meals and activities for children. After opening in April, it’s almost full.

As it becomes increasingly clear that their guests won’t be leaving anytime soon, the founders of the upmarket squat are making efforts to integrate the refugees into Greek society – helping the fathers find jobs and the children to enter public schools.

One of the occupiers, journalist Yiannis Andrulidakis, has deeper connections than most to the refugees’ struggles. His father was a Greek refugee from Turkey who subsequently fled to France to escape oppression under the military dictatorship of the sixties.

“We still advocate for open borders, against border policies and for the right of free circulation for all refugees around Europe. But we are saying if now they are stuck here, they are welcome and we will help them live here with us in humane conditions, with their dignity.”

Life in the collective

Daily assemblies are held in the Plaza’s dining room. Amid a cacophony of Greek, English, Arabic, and Farsi, weekly rotas are decided, with the guests sharing responsibilities for cleaning, serving food and security patrols.

Nesrine, a former English teacher from Syria, sips a coffee with one hand, balancing her squirming two-year-old son Basel in the other. She and her cousin travelled from Aleppo, hoping to reach their husbands in Germany who had made the trip last summer when the route through the Balkans was still open. Now they are grounded in Greece, forced to put their hopes in family reunification procedures that could take months, or even years. According to the UN’s refugee agency, UNHCR, more than 60 percent of the refugees stranded in Greece are women and children. 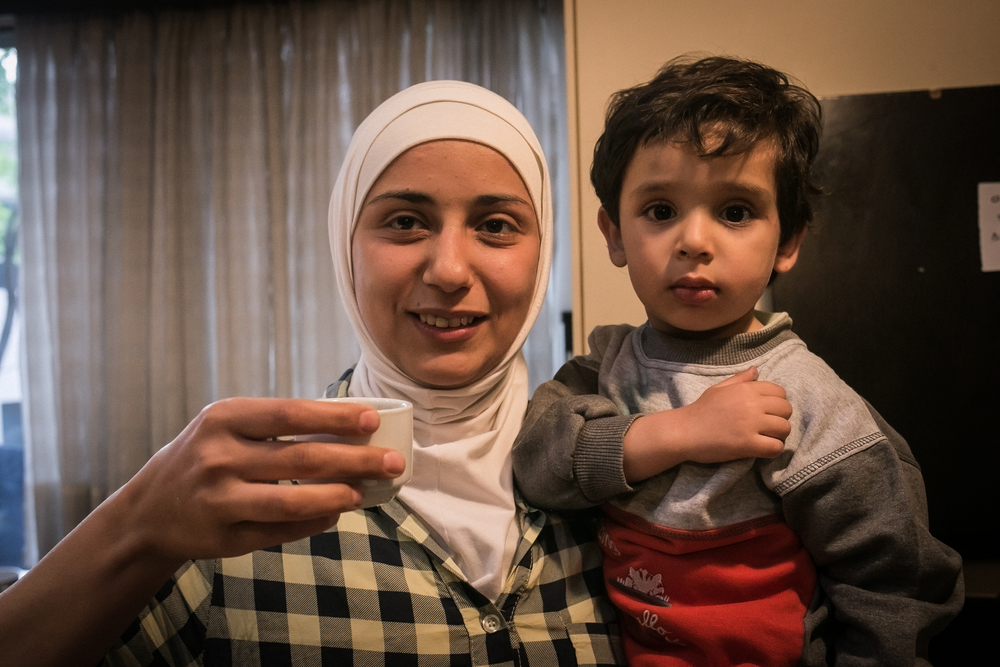 Nicola Zolin/IRIN
Nesrine, one of the hotel's guests, with her 2-year-old son, Basel

“We are waiting to be humans. Now we are only numbers. But the guys here made a nice project,” says Nesrine. “The Greeks are good people; maybe because they understand poverty and war. They have lived a long time the kind of days that we are living. Greek refugees even came to Aleppo 100 years ago.”

Over the last fortnight, bombs have rained down on Syria’s largest city, devastating Aleppo’s residential neighbourhoods and making a mockery of a ceasefire agreed in February. Nesrine’s parents gave their daughter the last of their money to reach Europe.

“Just this moment I have been talking with them on Skype. They are underground, trying to hide from the bombs everywhere and I’m happy that they are alive. Every time I am calling them, and my first words are ‘Mummy, are you still breathing?’”

City Plaza is a hive of activity. Old Syrian ladies vacuum the corridors; Kurdish children wipe tables; and Iranian women serve up steaming plates of rice and fried vegetables. The hotel itself is a metaphor for Greece’s precipitous fortunes. Built in preparation for the 2004 Olympics with government loans that were freely handed out in the boom years, the business subsequently fell into bankruptcy amid allegations that the owner fled without paying the workers’ final salaries. 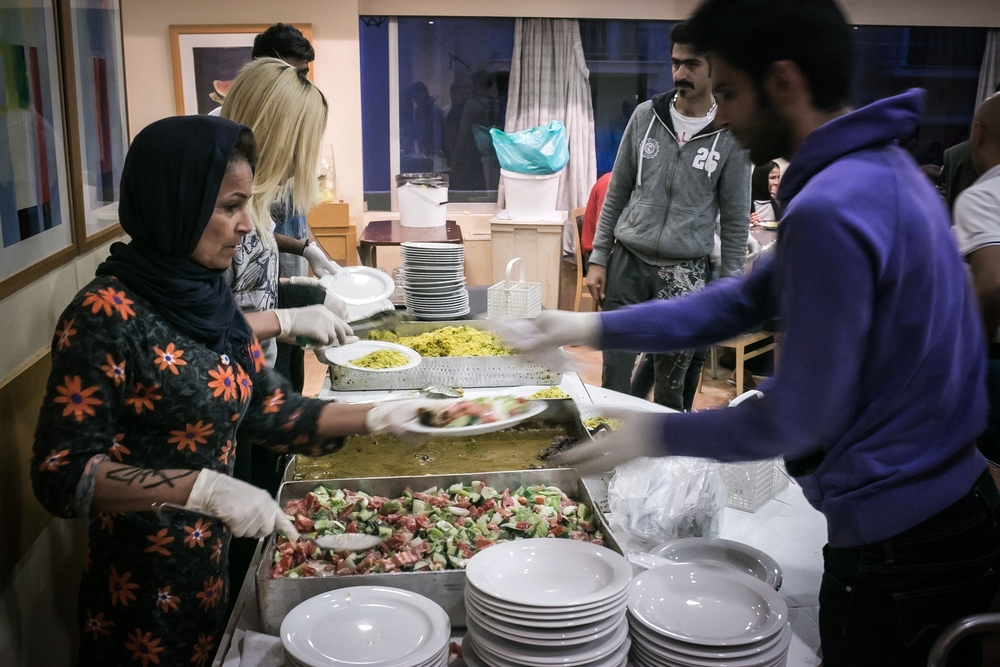 “The former employees heard what we are doing here now and they publicly support us,” says Andrulidakis.

“There are other empty buildings in Athens. With another 100 places like this, we can take thousands of refugees off the streets. How can you deny them a roof?”

For now, city authorities have taken no steps to try to evict the hotel’s new residents, perhaps relieved that it means a few hundred less refugees for them to deal with.

As Greece’s ailing economy shows no signs of recovery and state capacity remains weak, solidarity networks like these are offering a new way of addressing the humanitarian emergency created by the stranded refugees.

Loukia, a political science PhD candidate and activist, rolls a cigarette while Afghan children play with a dog behind her.

“The concept is to build new communities of co-existence between refugees and the local population. We don’t accept that refugees should be housed in ghettos or inhumane detention centres,” she tells IRIN.

“It’s difficult for the refugees. They couldn’t understand why we would do this. They thought we were a rich NGO or a state actor, something official. They couldn’t understand how we got this huge building, and without being paid. But finally they have a roof, they eat well here and they are in a clean place. They didn’t want to stay in Greece, and they won’t stay forever; but now it’s the next step in their lives.”