Two consecutive seasons of drought across northern Somalia are driving tens of thousands of pastoralists into hunger and debt.

Abdilahi Mohamed had 20 cattle in August. Only five now survive. He herded his animals 250 kilometers – from his home in Faraweyne to Banka Geriyaad, northwest of Hargeisa, capital of Somaliland region – in the hope that the Hays rainy season (December to February) had generated enough fresh pasture there.

“But before I got there people had already moved in and finished it all,” he told IRIN.

It’s a similar situation in the autonomous state of Puntland, to the east. Mohamoud Ahmed told IRIN by phone from Sanag region, one of the hardest-hit areas, that he had “lost a number” of his herd.

“My entire family is now in a critical situation: no water, no food, no nothing. Young ones and the elderly are suffering a lot. Sometimes I buy a drum of water for $120 – when I can afford it.”

The drought is leading to “large-scale abnormal outmigration of livestock” to areas that received Hays rains, according to the latest food security assessment for Somalia. But the “improved pasture and water will likely be exhausted soon”, as it is unable to support the mass arrival of pastoralists and herds from as far afield as Djibouti and Ethiopia.

The assessment, compiled by the UN Food and Agriculture Organization-managed Food Security and Nutrition Analysis Unit (FSNAU) in collaboration with the Famine Early Warning Systems Network (FEWS NET), says the current dry conditions are likely to persist until at least the start of the main Gu rains, which normally fall from April to June.

In self-declared independent Somaliland, “people have lost 80 percent of their animals” and 150,000 households are facing a food crisis, Mohamed Muse Awale, director of the National Environment Research and Disaster Preparedness and Management Authority, told IRIN.

Across northern Somalia, there has been a “sharp increase in debt levels among poor households”, while people are also selling off what animals they can to make ends meet, said the FSNAU/FEWS NET report.

At the market place, the pastoralists’ predicament becomes even starker. Not only are the sale prices of their livestock falling, but also their purchasing power, thanks to the government’s 15-percent devaluation of the Somaliland shilling against the US dollar in January. 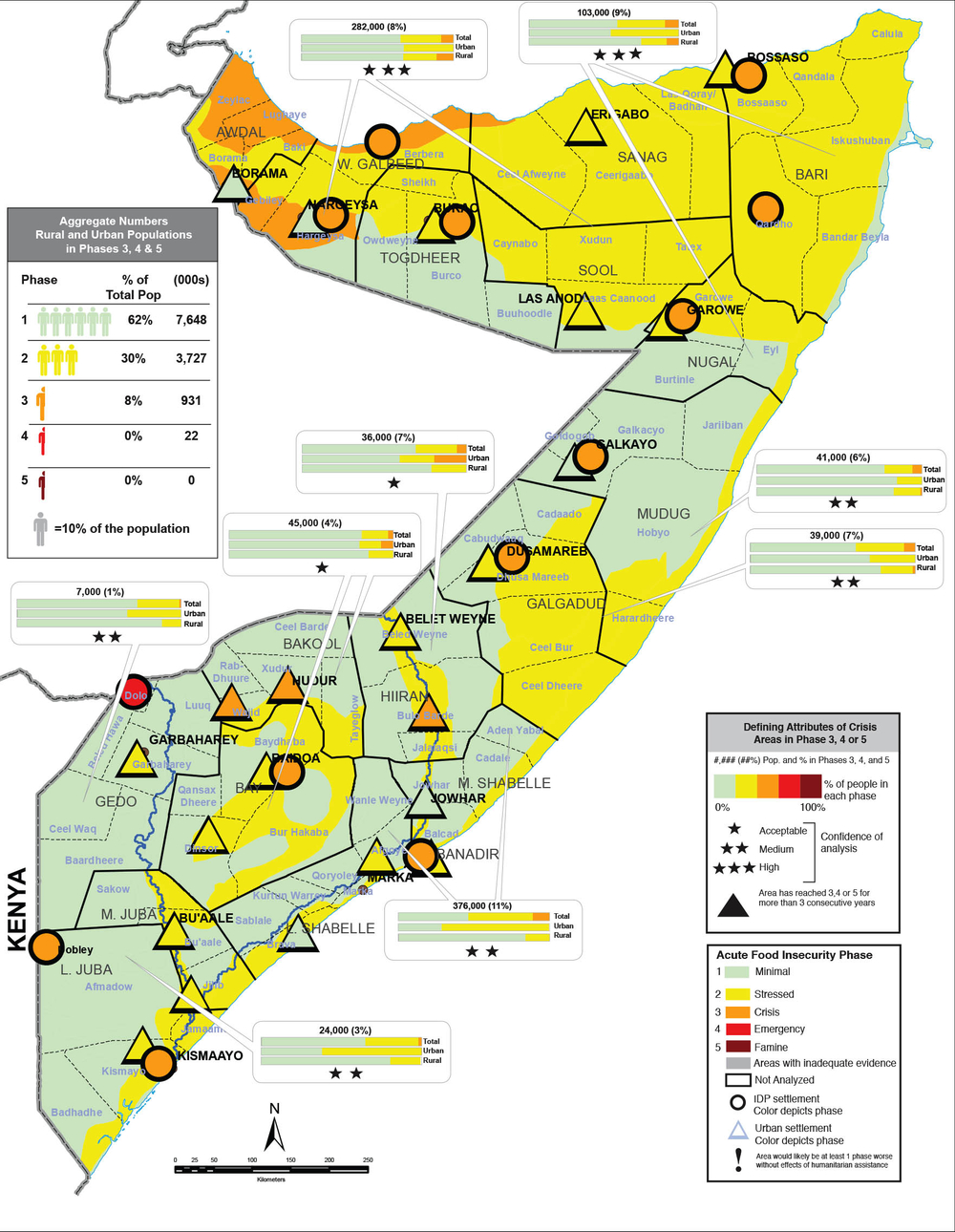 Most goods – including food items – are priced in dollars, but livestock is sold in shillings, meaning the pastoralists are taking a double hit.

“Even if I sell two of my sheep to buy food it’s not enough, because one sack of rice is $24 and one sack of flour is $34, and one sack of sugar is $36,” Omar Aden, who recently sold two animals in Gebiley market in Hargeisa, told IRIN. He only got $40 for each sheep. Before the drought, he would have got at least $50.

In both Somaliland and Puntland, some rural families are abandoning the land and moving into the towns. “We believe that about 20 percent of the drought-affected people have moved to the urban centers, settling with families, searching for survival,” said Somaliland’s Awale.

The impact of the drought can be seen across Somalia in the alarmingly high levels of food insecurity and malnutrition found in many areas.

According to a statement by the UN’s emergency aid coordination body, OCHA, an estimated 4.7 million people — nearly 40 percent of the Somali population — is in need of humanitarian assistance. More than two thirds of those are people who have been made homeless by conflict and past droughts.

“We are deeply concerned that the proportion of severely food insecure people remains alarmingly high, especially people who are unable to meet their daily food needs,” said Peter de Clercq, the UN’s humanitarian coordinator for Somalia.

“Some 3.7 million people will be acutely food insecure through mid-2016. With severe drought conditions intensifying in Puntland and Somaliland, many more people risk relapsing into crisis.”