A network of volunteers in Sicily, one of the frontlines of Europe’s migration crisis, has come up with a hands-on approach to help the record number of teenage migrants and refugees who have been arriving on the island without an adult guardian.

In 2015, more than 11,000 so-called unaccompanied minors crossed the Central Mediterranean, according to Save the Children. Most were rescued by the Italian coastguard and brought to Italian ports, usually in Sicily.

The usual approach had been for local authorities to designate them a guardian, often a social worker or the mayor of the town in which they disembark, and accommodate them in a reception centre.

“They were all barefoot and full of scabies,” immigration lawyer Carla Trommino from Syracuse told IRIN, recalling her 2013 visit to one such centre, where 16 Egyptian and 17 Somali boys shared the same living space as adult refugees.

Although Sicily now has a number of special reception centres for minors, many are severely underfunded and in a poor condition. Staff at one such centre in Catania – the Instituto de Assistenza ai Minori Stranieri Regina Elena – went on strike in November because their salaries had not been paid. Money is also lacking to repair broken doors and windows, let alone fund projects to help the children integrate into Italian society.

After seeing the need for an alternative, Trommino and a group of local lawyers went on to establish AccoglieRete – an NGO consisting of a network of 120 volunteers who can act as temporary legal guardians, and in some cases foster parents. Since 2013, they have assisted 600 unaccompanied children, aged between 11 and 17, mostly from Syria, Egypt, the Gambia, Somalia, Senegal, Eritrea and Mali.

The children, most of them teenage boys, receive help from their Italian guardians with applying for ID documents, registering for language classes, and even getting involved in social and sports activities.

The volunteers come from a range of backgrounds. The only prerequisites are that they live in Syracuse or the surrounding region, have no criminal record, and are willing to undertake the protection courses and children’s rights training provided.

Carla Frenguelli has fostered 15 children from countries including Somalia, Egypt, and the Gambia since 2013. They were all welcomed into her home in Syracuse, where they shared Sunday lunches, watched soccer matches, and practised speaking Italian with her husband and two daughters.

Frenguelli has seen how a child’s relief at having reached safety in Italy is often closely followed by disillusionment.

“Most of them are coming from Libya, where some were imprisoned and tortured,” she told IRIN. “They think life here will be easy, but when they see that finding jobs and getting documents is hard, they’re disappointed. After an exhausting journey and having faced death at sea, they have to learn a new language, find employment and be accepted by people.”

Trommino believes refugee and migrant children are more likely to adapt and integrate into life in Italy with the support of a personally involved legal guardian. She would like to see AccoglieRete’s model replicated in other parts of Italy.

The immigration lawyer has herself become the guardian of more than 20 children in the last two years, including a 16-year-old Gambian boy called Khalifa, who now lives with her family.

“Of all my work for years as a lawyer working with migrants, definitely this experience of sharing a home with Khalifa has been the richest. I have been learning a lot about cultural differences and about myself,” she said.

Another “son” from Bangladesh learned Italian, earned a degree, opened his own business, and today is supporting his family back home.

One of the most important roles played by the foster parents is helping the children in their care to obtain a national identification document that legalises their presence in Italy and ensures their access to public services such as healthcare and education.

Without this essential document, the children are at risk of becoming targets for exploitation and people traffickers, said Frenguelli. She and AccoglieRete’s other volunteer guardians pay the necessary fees and navigate the bureaucratic process of applying for the document, which can take up to a year.

“A migrant’s life is about documents,” said Lamin, a 17-year-old from Gambia, who was fostered by Frenguelli. “I trust Carla like a mum because she helped me a lot getting my ID. She always encourages me. Without her, my life would be so much harder here in Sicily.”

Carla Frenguelli with Lamin, an unaccompanied minor from Gambia whom she has fostered and is helping 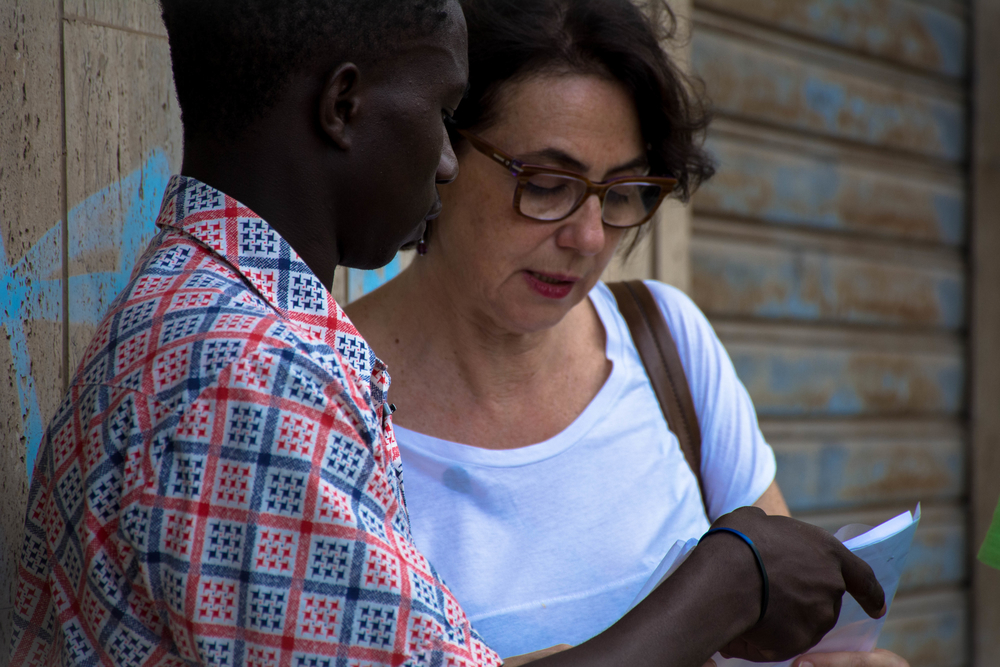 Before coming to Italy, Lamin spent four harrowing months in prison in Libya for being an undocumented migrant. He was only freed when one of the prison guards noticed how young he was.

“People from many places in Africa go to Libya to work, but what you find there is very different from what you heard before,” he said.

Passionate about soccer, Lamin wants to become a professional player. In the meantime, he is studying Italian and sending most of his 60-euro-a-month allowance from the Italian government back home to his father.

“I didn’t know I was coming to Italy when I took a boat to Europe. But now I want to have a better life here. I’m happy – I have documents, I go to school and I play,” he told IRIN before rushing off to join the soccer team Frenguelli helped him find, for their Friday night match.

Government support to unaccompanied minors is cut when they turn 18, but AccoglieRete’s legal guardians continue to help the youths who have been in their care by helping them further their education and search for jobs and a place to live.

“We never abandon our children because they become part of our family,” explained Trommino.