Not so long ago, Syria had an education system that was the envy of the Arab world and was reflected in its 90 percent literacy rate. But education has become yet another casualty of a civil war now in its fifth year.

Nearly half of the four million Syrians who have fled their country are living in neighbouring Turkey where authorities initially welcomed hundreds of thousands of the refugees in camps near the Syrian border. Many have since become tired of camp life and moved to cities in search of a more dignified existence.

Istanbul alone hosts more than 330,000 Syrians, according to 2014 figures from Turkey’s interior ministry, but with international aid mainly going to those living in the camps, urban refugees receive little assistance and live in poor conditions that are worsening as their exile continues and they are barred from the formal employment sector. Their children are paying the highest price for this enforced limbo.

Earlier this year, in the run-up to elections, the Turkish government backtracked on plans to grant Syrians in the country, who have only temporary protection status, the right to work. The government did adopt legislation aimed at improving their access to health care and education, but according to NGOs working on the ground, the majority of Syrian children still aren’t in school.

“Unfortunately, despite this new regulation, in Istanbul only 20,000 out of 80,000 [Syrian] children have access to school and amongst them less than 30 percent are enrolled in free Turkish schools,” said Suleiman Alaaraj, a Syrian staff member of the Syrian Commission for Education (SCE), which provides education services both in Free Syrian Army-controlled areas of Syria and in Turkey, with funding from Qatar Charity and the Islamic Bank.

Some of the Turkish schools simply don’t have space to admit more children while the language difference and Syrians’ lack of the required documents or information about enrolment procedures have also presented barriers.

Karyn Thomas, the founder of Small Projects Istanbul, an NGO based in Fatih, a working-class district with a high number of Syrian residents, noted that “the lack of the right to work for adults has a direct and strong impact on their children’s right to education.”

"People have no jobs, and when they do they are underpaid and exploited, and they can't afford to pay for their children's tuition fees"

“People have no jobs, and when they do they are underpaid and exploited, and they can’t afford to pay for their children’s tuition fees,” she told IRIN. “The result is that many young children either stay at home looking after their siblings and household or are forced to work and beg in the streets to provide their families with some income.”

For the small number of Syrian children in Istanbul who are admitted into free Turkish schools that follow the national curriculum, Alaaraj acknowledged, “it’s often difficult for them to keep up with their classmates because of the language barrier and only one out of 10 succeed [in end-of-term exams].”

Across the city there are 60 Syrian schools (officially referred to as “temporary education centres”) where classes are taught in Arabic using a curriculum created by the opposition Syrian Interim Government, but only six of them are free. Some are located inside mosques and private or public buildings, but often only for a limited period of time before being moved somewhere else. SCE provides the schools with free textbooks, the content of which have been adapted by the Free Syrian Army and purged of what they view as the Syrian regime’s propaganda.

Reema Adadi is a Syrian teacher at a school located in a small mosque in Fatih. “The problem with this school is that each class is composed of kids of different ages,” she said, adding that attendance is sporadic because the children are often forced to work and contribute to the family’s income.

“[There are also] children who suffer from different traumas and should be taught by specialised personnel,” she told IRIN.

Inside a free school for Syrians hosted within a mosque in Istanbul, a mentally disabled child is as 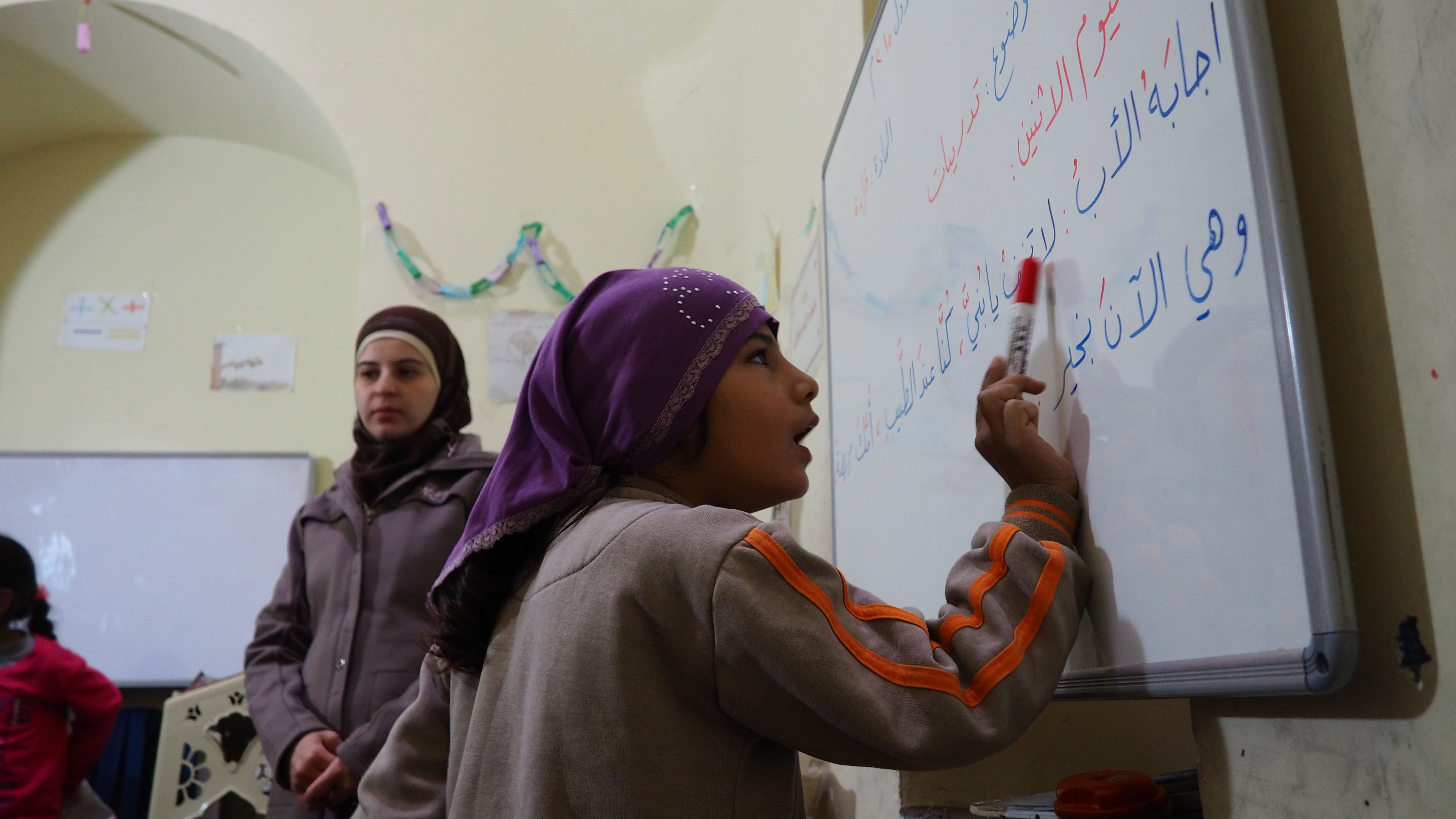 In addition to the Turkish and Syrian schools, there are several private schools funded by secular or religious organisations, which cost between US$590 and $690 per child for each academic year.  They are often products of community-based initiatives associated with the Syrian opposition in Turkey, and although they are usually well managed, some are still not registered with or recognised by the Turkish government.

Syrian families with several children and no regular income may be able to send one child to school “in the best-case scenario” said Alaaraj of SCE. “In the worst one, if perhaps they live far away from the school and must pay additional money for transport, they drop the whole idea.”

Alaaraj stressed that Syrian children not in school are “easy prey for the radical and criminal groups that are booming across the city.”

“We also hold Turkish classes for them and their children to cope with their daily lives and integrate into Turkish society,” said Thomas. 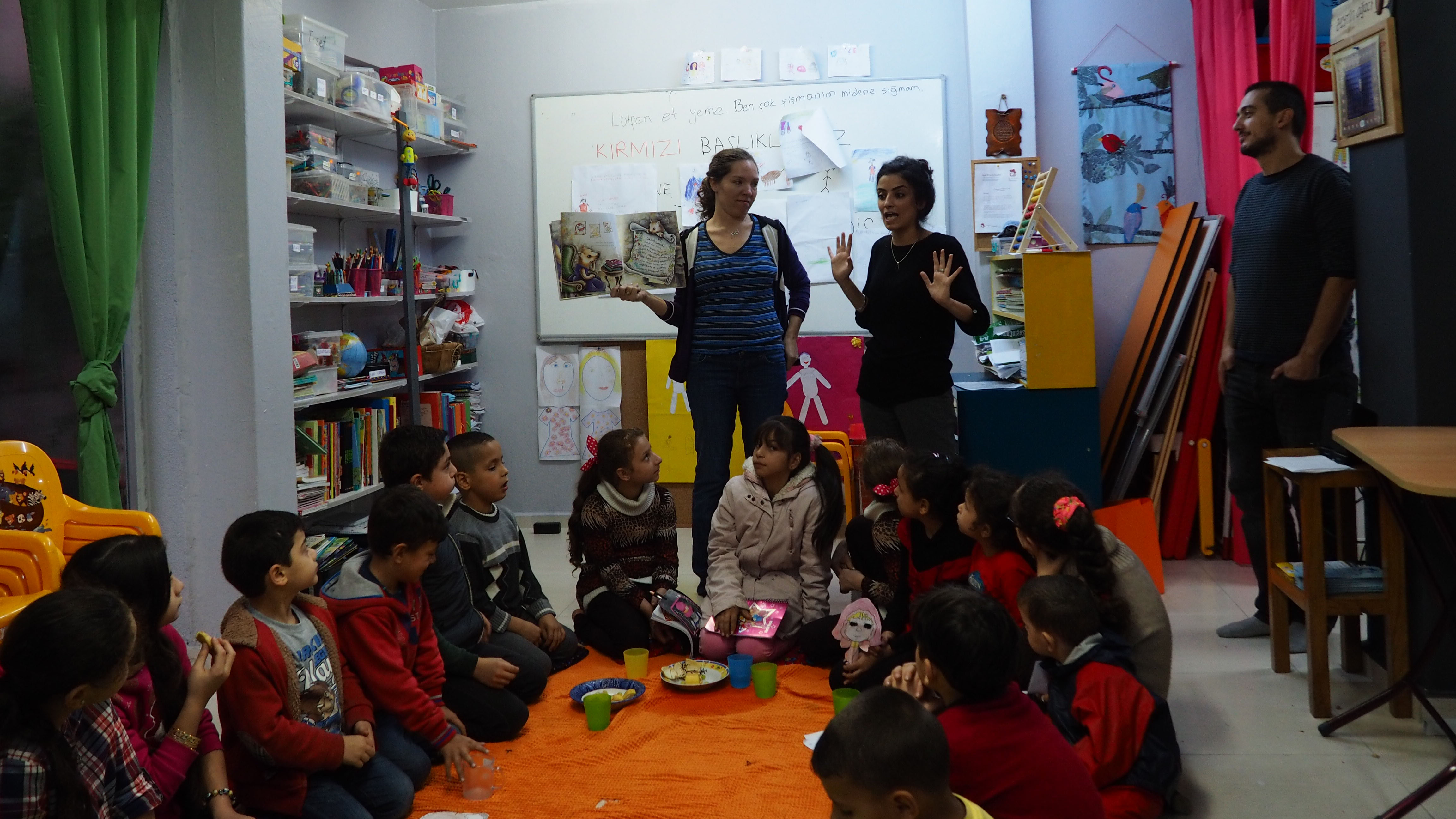 With limited funding, she added, “we do what we can and, unfortunately, it’s only a drop [in the ocean] compared to the Syrian schooling catastrophe we are facing.”

“To not end up with a whole generation of young Syrians without education, and zero prospects for their future inside or outside their home country, there is just one solution,” Thomas told IRIN. “The Turkish government must give Syrians the right to work, and therefore a chance to build a decent life here. Until then, the international community must provide them with financial help, and bring education back to the top of Syrians’ priorities – as it used to be before the war.”