Read about what we achieved.
GUECKEDOU

“Life is back to normal, but everything has changed,” said 30-year-old Yawa Keterine Camara as she slowly stirred a boiling cauldron of sauce outside her mud-brick home in southeastern Guinea. “I live again like before, but nothing is quite the same.”

Camara, who lost her husband to Ebola in November, said her life, like many, many other Guineans, is now divided in two: pre-Ebola and post-Ebola, the before and after.

“Sometimes it seems impossible that we are still here, still doing what we did before,” she told IRIN, as she added more wood to the fire. “But here we are. Life goes on.”

West Africa’s Ebola outbreak is believed to have started here, in the Gueckedou forest region, in December 2013. More than 3,500 Guineans have since contracted the virus and 2,391 of them have died.

New cases continue to be reported in and around the capital Conakry, but the Gueckedou region, including Camara’s village, Bellessa, has been Ebola-free since early January.

While this is a point of pride for many in the region, it is also nothing to celebrate.

“It’s true that life continues,” said 29-year-old Gabriel Kamano from Gueckedou town. “But we lost so much [due to Ebola]. “We’ve lost family members and work. Now, there is a food problem developing because people couldn’t cultivate their fields last year. It’s very difficult, but we just keep trying to do the best we can.”

The World Bank estimates that Guinea will suffer $540 million in lost income in 2015 due to the Ebola outbreak. In 2014, rice production fell by 20 percent, coffee by 50 percent and cocoa by a third. An estimated 1.2 million people are now suffering severe food insecurity, the World Food Programme says.

In most cases, Ebola didn’t just strike a household once. Instead, it sickened and killed multiple family members, spreading from person to person as people cared for their loved ones.

Entire family structures were disrupted as families lost their main breadwinners and caregivers. Others were torn apart by survivor stigma and fear.

“We talk and walk normally as before,” said Saa Sabas Temessadouno, 48, an Ebola survivor and president of the Association for People Affected by and Cured of Ebola. “But people treat us as if we are no longer the same. We’ve lost our work and our social support systems.”

They’re just not my mum and dad.

In Gueckedou alone, more than 850 children between the ages of one month and 17 years lost one or both parents to Ebola, according to the town’s Department of Social Action for Children.

All have since been found homes – whether with immediate or distant relatives, friends, neighbours, or even strangers – but adapting to a new life is difficult both for the orphan and the adoptive family.

“My new family is nice to me,” said 13-year-old Mado Millimouno, who lost both her parents to Ebola last year. “They are never mean or violent, but it isn’t the same.

“It’s hard to explain, but the host family is different… You see, the love that you usually get from your parents, doesn’t exist. It’s no longer there. It’s the little things, the gestures of affection that are gone. They’re just not my mum and dad.”

Mado’s aunt, 25-year-old Mama Millimouno, who took her in, told IRIN: “I try to treat her like my other three children. There is no demarcation. But there are moments when she isolates herself. Even before, there were problems with money and now there are many difficulties with additional expenses.”

Some orphans have started back at school. Others, like Mado, have not.

“Families were already poor, and now (they’re) even more so because of Ebola. So they can’t afford to send them to school. Instead, these kids must work in the fields to help the family grow food and earn money,” a spokesman for Gueckedou’s department of child protection services told IRIN.

“We try to provide adoptive families with things such a socioeconomic help, clothes, schools, etc., but it is still a work in progress. Often the money is misspent,” the spokesman said.

He added that many siblings were also separated, as families couldn’t take in more than one child, increasing the hardship on the orphans.

“It’s difficult for these kids to have lost their parents and now not be with their brothers and sisters any longer, but they don’t have any other choice but to adapt to the new situation.”

Gueckedou is currently Ebola-free. But it is nestled between the borders of Sierra Leone, where Ebola continues to spread, and Liberia, which was only just declared Ebola-free on 9 May. People also come and go to Conakry and Guinea’s other regions on a daily basis, so locals, who once vehemently denied the very existence of the virus, now say they know it could come back at any time.

“We still take many precautions,” said 18-year-old Tamba Abel Camano. “We still wash our hands with chlorine many times a day. We still avoid touching strangers. We no longer bury our dead ourselves. Many friends stay away and sometimes we stay away from former friends. You just don’t know.”

The brightly-coloured hand-washing stations that sprung up outside most places of business, as well as private homes and schools, remain. Some establishments still ask to take your temperature before letting you enter.

“We used to think that these measures were bizarre,” Camano said. “But now they have become a way of life. In fact, it feels abnormal if you don’t wash your hands before going someplace.”

Yawa Keterine Camara, who lost her husband to Ebola, says she is trying to live life as normally as possible. 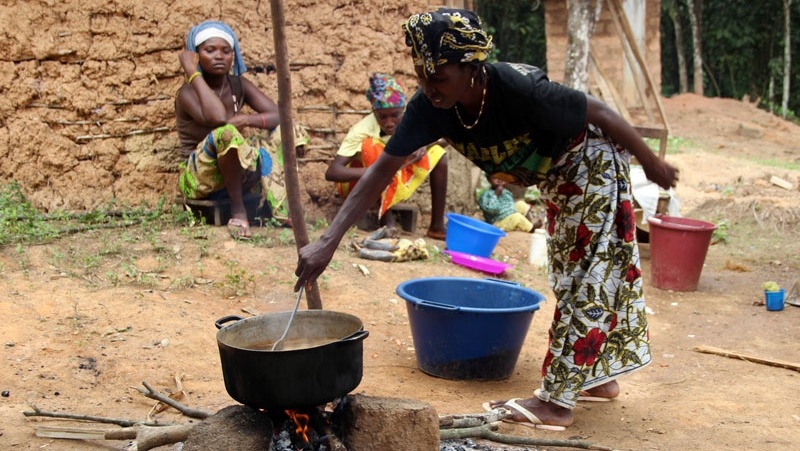 Another sign of how attitudes have changed is the new reluctance to eat bush meat, which could have been the source of the Ebola outbreak.

“Since Ebola, I try to avoid bush meat now,” said Saa Sekou Tenguinano, 61, who lives in Bellessa. “They tell us that bush meat started Ebola, so many people are cautious around it now.”

Ebola is in the past now, but it’s still a part of our lives.

While market activities have resumed, vendors – in particular those from affected families – say business is nowhere near back to normal. There is stigma involved, and many clients remain afraid to buy from someone who had Ebola or whose spouse or parent or sibling died from the disease.

Almost all the Guineans IRIN spoke to said they were now hyperaware of illness and being sick.

“Even the smallest of symptoms evokes a reflex of fear,” Camara said. “Now, there is always nervousness. People are always afraid. What if? What if?”

Fina Marie, a 38-year-old mother of eight who lost her husband to Ebola, said many women now refuse to get water with each other at the stream – something that used to be a fun, social activity.

“Ebola is in the past now, but it’s still a part of our lives,” she said. “Each day we are reminded of what we lost and how we suffered. It’s not something you can forget. The question is: how can you continue on?”