Islamic State militants play on sectarian division as they tear Iraq apart, but a group of young Iraqi “citizen ambassadors” is trying to mend the damage by promoting a message of tolerance and peace.

Rasha al-Samarai is one of nearly 2.8 million Iraqis to have fled their homes in the last 16 months as IS has swallowed up a quarter of the country and large swathes of neighbouring Syria.

The 30-year-old left the city of Tikrit with her family when IS took it over last June, slaughtering more than 1,500 Iraqi Air Force cadets in the process.

Sectarian atrocities by the Sunni Muslim militants have spawned brutal reprisals by Shia militia, and across Iraq, relations between different communities and religious minorities are increasingly tense.

Despite – or perhaps because of - being without her possessions and not knowing when she will return home, al-Samarai is determined to tackle the sectarianism that is wrecking her country.

“I believe in treating people as humans no matter what religion or nationality,” she told IRIN, speaking from her cousin’s home in Erbil, the capital of the semi-autonomous Kurdistan region.

“Youth can play a major role in eliminating sectarianism and racism by supporting each other. Hand in hand, it is our responsibility to educate people to live peacefully.”

Al-Samarai is part of Kullina Muwatinin (“We are all Citizens”), a youth project sponsored by Dutch NGO PAX that has developed a network of 25 “citizenship ambassadors” representing Iraq’s diverse religious and ethnic backgrounds.

The group, with members from all of Iraq’s 18 provinces, arranges workshops and community awareness events, with members visiting each other’s places of worship to try to mend fences and build bonds between them.

They also campaign to improve rights for minority groups, most recently submitting comments to a draft law on minority rights being debated by parliamentarians in Kurdistan, and run radio shows and other media events. 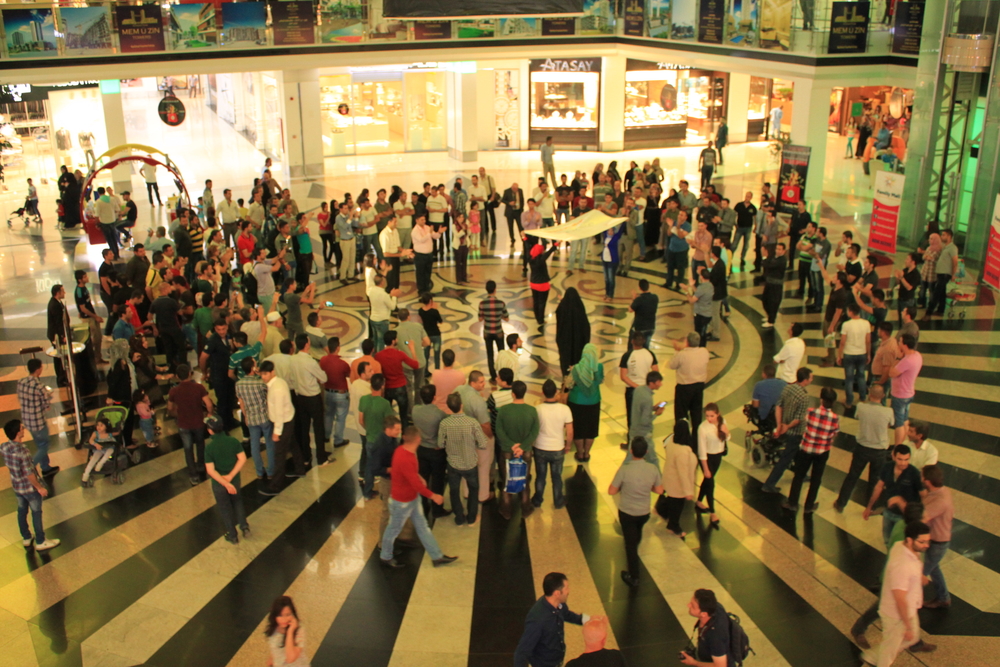 PAX’s Thirsa de Vries explained that while the project had been going since 2012, it was “needed now more than ever because of rising sectarian tensions and violence because of IS and the enormous pressure on young Iraqis to join militias.”

In addition to the Shia Muslim Hashd al-Shaabi militia (People’s Front), groups of Sunnis, Christians and ethnic minorities such as Yazidis and Turkomen have taken up arms to defend their territory from the majority Sunni IS, whose extreme violence has been compared to genocide. In other cases these groups have turned on each other.

While often well-supported in their own communities, these local militia movements are controversial because they are seen to act outside the law without any real accountability.

Hashd al-Shaabi, which has significant backing from neigbouring Iran and fights alongside the army of Iraq’s Shia-led government, has been accused of rights abuses.

Christine van den Toorn, director of the Institute for Regional and International Studies at the American University of Iraq, Sulaimani, (AUIS), agreed that sectarianism, while long present in Iraq, had intensified since IS' advance.

“Everything is being discussed in sectarian and ethnic terms”

“Until June last year you knew there was sectarianism, but it had not really sunk in or trickled down into the wider population on a social level, it was mostly between politicians,” she said.

“But there has been a big change since June, and the mistrust and the suspicion that is based on or associated with sectarian identity has got a lot worse at the popular level.”

Van den Toorn, an expert on Iraq’s minority groups, added: “I see it in my students, people are at the end of their rope; everything is being discussed in sectarian and ethnic terms and there is such strong rhetoric, among Yazidis, between Sunni and Shia, between Arabs and Kurds.”

De Vries said: “We try to give the young people different tools so as to be active in society and play a positive role as citizens.”

“It’s about learning how to advocate for change in a non-violent way in a cultural context where violence is presented as the answer for everything, as well as introducing them to people from minority and religious groups they would not normally come into contact with.”

Group member Ali Adel Abdulkareem, a computer sciences graduate from Baghdad, told IRIN he had grown up almost exclusively with Shias. Since joining the project, he now counts Yazidis, Shabaks and Christians among his friends.

“I have learnt that they are all human and just like us, they have their rights,” the 35-year-old said. “It’s time we finished with sectarianism and racism and stopped the discrimination against minorities.”

Advocating for more rights for minority groups is another important aim of Kullina Muwatinin.

In Baghdad, the group is campaigning for permission for the first Yazidi cultural centre outside of northern Iraq, as well as calling for an end to discrimination against gypsies and black Iraqis.

Hajar, 25, is nine months pregnant and due any day. She has five other children, a 7-year-old, six-year-old twins and two-year-old twins. She and her husband are Kurdish Shabaks and fled their home in Bashiqa, near Iraq's second largest city Mosul in Augu 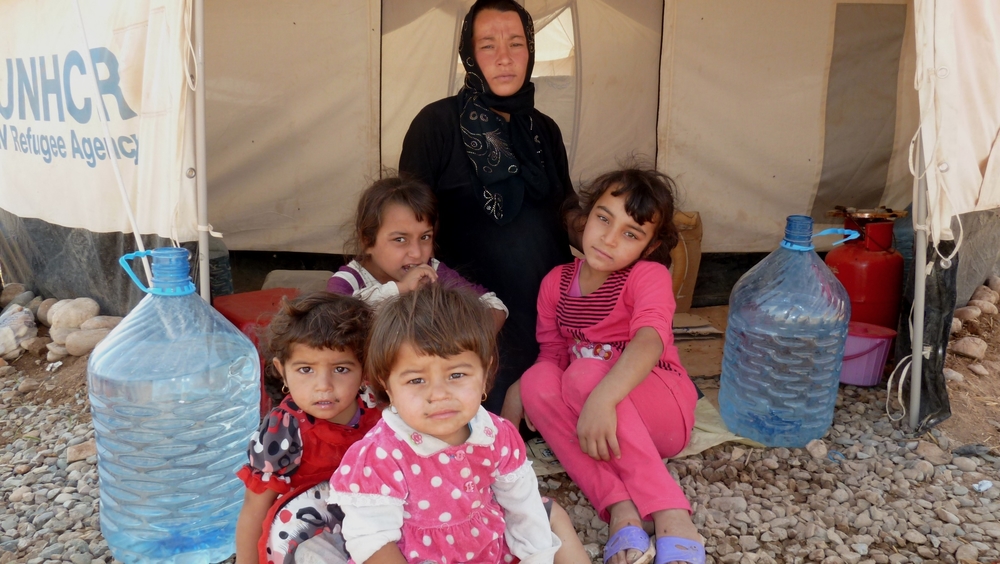 Zuhair Lazgeen, a Yazidi, who was until recently a citizenship ambassador for Kullina Muwatinin for Dohuk province in Kurdistan, said he believed past failures to tackle discrimination against Iraq’s minorities paved the way for IS.

“As Yazidis, we have faced a lot of discrimination and in recent years it had been getting worse,” the architecture graduate explained. “For me, I see that as the early symptoms of the current situation because if you don’t stop discrimination, it grows into something bigger and can become violent.”

The 26-year-old, from a village south of the city of Dohuk, is currently working as a project co-ordinator for an NGO supporting displaced Yazidis and Syrian refugees in Kurdistan.

He blames what he calls “ignorant Iraqis” for feeding IS information about Yazidis being infidels and devil worshippers.

“[Many] of IS people are foreigners, they didn’t even know what Yazidis were, the problem came from within Iraq and this is how we must tackle it,” he said.

“We need programmes like this to change minds on the ground and to create mechanisms to counter the violence and discrimination that occur in our country.”

Kullina Muwatinin is not the only project trying to promote dialogue and counter sectarianism in Iraq.

The United States Institute of Peace (USIP) through its Network of Iraqi Facilitators (NIF) has been involved in civic engagement activities in Iraq since 2003, and is currently preparing a number of new community dialogue activities, including for areas recently liberated from IS.

Pascale Warda, a former Iraqi Minister of Migration and Displacement and now president of Hammurabi Human Rights Organisation, told IRIN that the only solution to Iraq’s deep divisions was education.

“We need to rebuild a new generation with information and a sense of meaning about responsibility for a common good,” said Warda, a Chaldean Assyrian Christian.

“We are working very hard to change primary and secondary school programmes, to include definitions about minorities on the national Iraqi curriculums,” she added, regretting that many Iraqis knew more about the history of Palestine than their own country.

The role of government

Mark Lattimer, director of the UK-based Minority Rights Group International, whose February report paints a bleak picture of the plight of Iraq’s minorities, welcomed all dialogue initiatives, but stressed that more needed to be done at a government level.

“I think any kind of civil society bridge-building is a good thing, but the difficulty is that they are taking place at a time when government policy is effectively defeating the process of bringing communities together,” he said.

“What we are moving to is an increasingly sectarian Iraq and the policies of the Iraqi government, as well of as course groups like IS, are making the situation worse and we are moving back towards a renewal of the 2006-2007 sectarian war.”

“The young people we work with... really want things in Iraq to change. They want to make something of this country”

The Shia-led government of Iraq, which replaced Saddam Hussein’s Sunni-dominated regime, has been accused of fuelling religious divisions by supporting militias and failing to address the concerns of minorities.

But the citizen ambassadors hope that by going against the grain and forging new relationships, they can begin to redress the balance.

“The young people we work with  - my young people - really want things in Iraq to change. They want to make something of this country, not to stay stuck in this situation with the old divisions between Shia and Sunni,” Ibtesam Lateef, Baghdad-based co-ordinator for Kullina Muwatinin, told IRIN.

“Using dialogue we are going try to put an end to sectarianism. It will not easy but it is not impossible, we have to keep having hope.”