When Shaharzad completed her law degree and announced she wanted to get a job, her younger brother did what he could to stop it. Coming from the culturally conservative Badakhshan region, the siblings had left their parents behind to move to the capital Kabul and her brother was technically the head of the household. Even still, she was determined to stand on her own feet.

Two years later, he is still trying to persuade her to quit. “Every two or three days he says the same thing - it is better to stay at home and I will provide the salary. He asks me to stay at home and cook for him and wash his clothes,” she said, giggling as though amazed by her own rebellion. “But I am trying to go forwards, not backwards."

Shaharzad makes up one fifth of the Norwegian Refugee Council’s first ever female-only intervention team, which the NGO believes is also the only such entity in the country.

Working around shelter issues, the women are tasked with aiding female-headed households in one particular region of the capital Kabul.

Homaira, the team’s leader, who like Shaharzad asked that just her first name be printed, has been with the organization since 2008, but until last year she was always a solitary woman in an all-male team.

This affected how much contact the NGO had with women in the communities.

“When we were going to the villages to identify the beneficiaries, since the head of the communities are usually male they were introducing only the vulnerable males to us. The number of female beneficiaries was very low,” she explained.

“[The women] had to go through a middle man and sometimes we heard that they were charged [had to pay money],” Homaira added. “Now they contact us directly and can benefit without charges or bribery.”

Among the many services NRC provides is helping women register for national identity cards. Up to 90 percent of women in the informal settlements of Kabul don’t have ID cards - and that means they can’t formally rent a house, open a bank account, inherit money or vote.

The five women come from different parts of Afghanistan’s tribal society, yet the experience has bonded them together.

“We have built confidence in women - even among ourselves,” Shaharzad said. “At the beginning when I was going to the villages and selecting the female-headed households I was not sure the women could build their shelters. But when we provided resources, cash, and they showed they could handle it, now they are confident in their ability and I am too.”

Members of NRC's all-female shelter team on a visit to a beneficiary on the outskirts of Kabul. The team helps female-headed houses build their own homes. 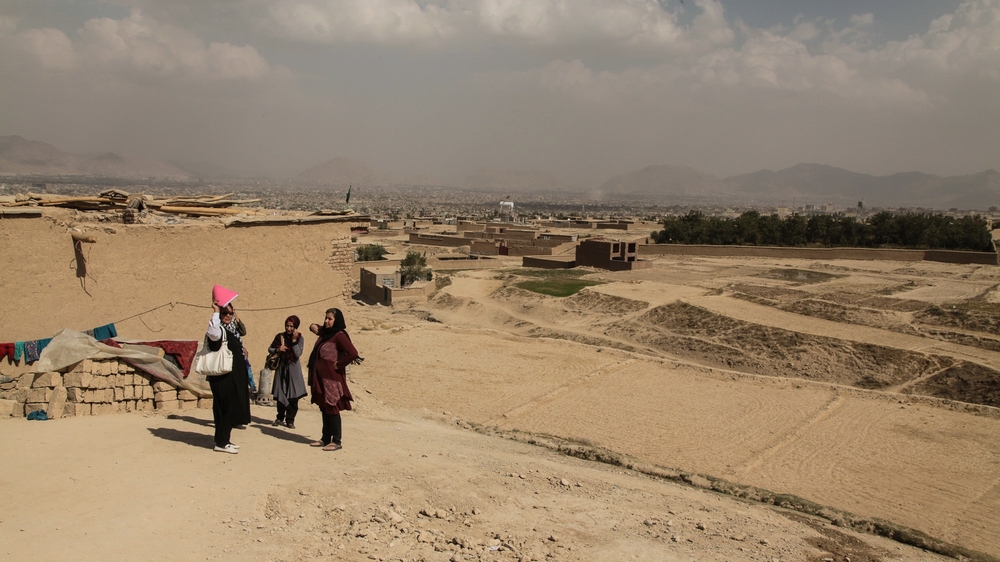 Fourteen years after the US-led invasion, a woman’s place in Afghanistan is still largely indoors and out of sight.

The Afghanistan National Nutrition Survey released in 2013 found that 95 percent of Afghan women aged 15-49 suffer from Vitamin D deficiency due largely to their lack of exposure to the sun.

In the world of work, too, the gains made by women have been limited. Only 16 percent of Afghan women have formal jobs, according to the World Bank, and a survey last year noted a lack of job opportunities was the second highest issue behind education for women in the country.

Foreign NGOs and UN organizations, most of which have explicitly committed to the UN Women’s gender mainstreaming policy as well as equal opportunity legislation in their countries of origin, are among some of the more open organizations in terms of employing women, but they still fall far short of equal representation.

IRIN asked a number of international organizations what percentage of their Afghan programming  staff were female.

UNHCR (the UN Refugee Agency) said it was just under 20 percent, NRC was 29 percent and Médecins Sans Frontières (MSF) was 36 percent.

Cathy Howard, acting head of the UN Office for the Coordination of Humanitarian Affairs (OCHA), admitted that just 2 percent of their national staff were female, a figure she wants to change. In total OCHA has around 100 programming staff in Afghanistan, including international workers, she said.

“What we are trying to look at is how to improve that pretty abysmal percentage in the next year or two years - whether at Kabul level or sub-office level. [We have had] a very frank conversation about what we need to do to improve upon this,” she said.

Among the measures being discussed by OCHA is the lowering of entry requirements, so that candidates only need a bachelors, rather than a masters, for certain posts.

“We would much prefer to see relevant work experience than another degree,” Howard said. “That might open the way for more women because what we have heard is while it is hard enough for women to get a first degree, far fewer women are going [on] to do a second degree.”

She also stressed that a cultural shift was needed in the organization to prioritize the issue. “I would expect that any shortlist of candidates must include at least one woman. If that shortlist does not include a woman I would need to see very strong justification for why that is not possible and I am quite prepared to re-advertise again and again until we do.”

Rowing against the tide

Yet all sides admit that merely having equal opportunity policies will not be enough. Afghan cultural norms remain an issue preventing female employment, with women often leaned upon by family and friends to abandon their work plans, just like Shaharzad.

One non-Afghan female UN worker told IRIN about a particularly frustrating decision by a female candidate to withdraw under familial pressure. “She had done all the interviews and we had recommended her. Then she came in for the final results but before we said anything she told me she had changed her mind,” she said. “We pleaded with her but she just said no.”

Likewise, the problem starts earlier than the job market - with women often not receiving the same level of education as men.

Guilhem Molinie, head of mission at MSF, said that while it was not impossible to find female candidates for specialist medical roles such as doctors and midwives, "it is very challenging,” especially outside the capital Kabul.

"Finding qualified educated women willing and able to work is rare throughout all Afghanistan but it is even more difficult to find in provinces,” he said.

“If we don’t find the right staff locally, we also need to convince them and their family to relocate to cities like Khost, Kunduz, Lashkar Gah where the security and overall conditions are not well perceived, especially in the eyes of someone living in Kabul.”

All of the NRC women admitted they would struggle to gain acceptance for their work if they were operating in more rural areas.

Howard accepts these issue but believes that progress can be made in the large, more liberal cities. “We need to focus on those areas where there is more acceptance of women working per se and capitalize on that. Some other areas - more deeply conservative areas - are much more a work in progress,” she said.