Maternal and infant deaths in Liberia and Sierra Leone are set to rise above their current alarming rates as fear of Ebola keeps pregnant women away from hospitals and makes already-scarce health workers reluctant to deliver babies.

“At the beginning of the outbreak, health service staff were the ones getting Ebola - many of them were dying. And they had no facilities to help sufferers. People grew terrified and when news spread, everyone got scared,” said the head of maternal health for the UN Children’s Fund (UNICEF) in Sierra Leone, Augustin Kabano. “Some centres have just two or three staff so if one dies, the whole system shuts down.”

Liberia and Sierra Leone already have some of the world’s worst maternal and infant death rates though they are better than they were: In 2010 some 890 women in Sierra Leone died per 100,000 live births, down from 2,000 ten years earlier. In Liberia 770 per 100,000 died in 2010, down from 1,100 in 2005, according to UNICEF. The improvements are linked to the introduction of free health care to pregnant, birthing and lactating women in public health facilities. Both countries had also upped the number of births attended by a health professional to 63 percent in Sierra Leone in 2012, and 46 percent in Liberia.

But when Ebola broke out in Sierra Leone in May, and Liberia in August, the number of births attended by a health professional in Liberia dropped from 52 percent to 38 percent, while the number of women in Sierra Leone attending hospitals and health centres to give birth has dropped by 30 percent, according to the countries’ respective Health Management Information Systems. These attendance rates will increase maternal and infant death rates, said Kabano, though the extent of this will probably only become clear once studies take place (such as the government-UNICEF comprehensive health indicator study to be rolled out in Sierra Leone in 2015).

Fear on the part of health workers, combined with a shortage of midwives or doctors available to deliver babies, led to the death of expectant Fatumatta Fofana, a mother of five from Bushrod Island, a slum neighbourhood in Monrovia, according to her brother Mohammed Sheriff.

"Some centres have just two or three staff so if one dies, the whole system shuts down"

Fofana was turned away from her local clinic because there was no nurse or doctor available. She tried Redemption and JFK hospitals, but they, too, were closed because the government had temporarily shut down all state hospitals amid mass health worker deaths.  Fofana finally turned to a small clinic called Muslim Clinic, but its administrator Alieu Konneh said he could not find a doctor who would come to help her deliver.  Fofana died a few hours later and her baby did not survive.

JFK hospital has since reopened its maternity ward but only for patients receiving pre-natal care, as staff are too afraid to treat women in labour who may be Ebola-positive, said a doctor who preferred anonymity.

Doctors are also charging extortionate fees to women to give birth - not a new practice, but the fee has gone up, said a doctor who asked to remain unnamed, linked to the associated risk of a potential Ebola-positive birth.

When Comfort Fayiah, from Monrovia's Paynesville neighbourhood, went to Benson hospital, which is run by the Ministry of Health in Monrovia to give birth, doctors there demanded US$400 to deliver her baby but she did not have the money and was forced to give birth on the floor of a makeshift church a few yards from the hospital, with no one but the church’s pastor, Mother Reeves, to help her. She birthed twin girls and called them Mercy and Faith.

Fayiah’s local health clinic had refused her as no doctors or midwives were working. “I was feeling pain so before I reached the church door, I was not to myself again. That is how the first baby dropped before my pastor called one man to help me,” said Fayiah, who is still sleeping on a mattress on the church floor. She has four other children and her husband Victor has no job - he used to sell odds and ends on the streets but business ground to a halt due to Ebola fear, he said.
Ebola has decimated the health worker population of Sierra Leone and Liberia.

Memorial notes posted for Kenema hospital nurses who have died in the Ebola fight. 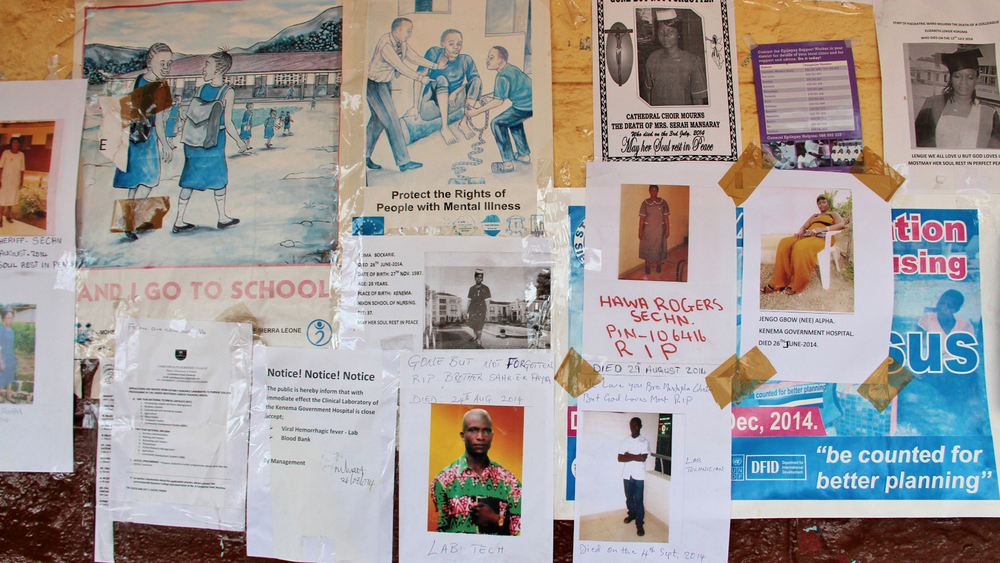 In one hospital alone in Sierra Leone’s Kenema District, the disease killed 38 health workers, including two midwives and the country’s chief epidemiologist, Sheikh Umar Khan. A wall on the hospital’s main building has become a shrine to the dead, with pictures of late colleagues, and messages of Rest in Peace. One of the hospital’s midwives died attending to an Ebola-positive women who miscarried, said Margaret Fatoma, head nurse on the maternity ward. Sierra Leone currently has just two obstetric gynaecological doctors.

There are as yet no protocols in place in Sierra Leone to guide doctors and midwives on how to safely deliver the baby of an Ebola-positive patient but they are being drawn up, said UNICEF’s Kabano.

Katherine Mueller, spokesperson for the International Federation of the Red Cross in Sierra Leone, told IRIN it would be a huge challenge for nurses to deliver a baby while wearing a PPE protective suit, as they are dangerously hot. Health workers there are only permitted to wear them for 15-minute intervals before coming out of the high risk zone at the IFRC’s Ebola treatment centre just outside of Kenema.

The health worker deaths and high death rate of Ebola patients at hospitals and treatment centres, have also scared many women away from seeking treatment during labour, said Fatoma and mothers of infants at the hospital. Just a handful of beds are occupied at the hospital’s 25-bed maternity ward, and patient numbers are down from 150 on average to 90, said Alice Kabbah, chief midwife on the ward. The maternity ward is far from the Ebola treatment centre, and has a separate entrance.

Issa French, deputy head nurse at Kenema hospital’s Ebola treatment centre, could not say how many of the 488 patients who have been treated there had been pregnant women.

According to him, about half of the 1,000 Ebola patients admitted there since the outbreak, have survived.

Amid all the grim horror, one story stands out: that of 17-year-old Ruth*, who was being treated in the Ebola centre and gave birth there attended by midwives wearing protective suits. She and her baby were treated and both survived. More effort needs to be made to train up midwives in how to deliver Ebola-positive women safely, said midwives.

Local communities are increasingly claiming their hospitals back. Residents of the capital, Freetown, put enough pressure on the Connaught hospital there that it is winding down Ebola treatment.

Likewise Kenema government hospital, which had two Ebola patients when IRIN visited, and two admitted the following day, is winding down its Ebola treatment, as the IFRC treatment centre gradually scales up. As of 4 October the treatment centre had received 52 admissions since it opened three weeks earlier, with 22 deaths and 13 discharges.

Once hospitals get back to their usual routine, said infant nurse Yata Blango, numbers should rise again - not only for women in labour but also for infants and children who attend under-five clinics for free health care, as attendance rates there also dropped at the peak of the crisis from 100 cases a week to 30. Blango and her team go house to house encouraging women to come. “The majority [of women] are still too scared and say the nurses all have Ebola,” she told IRIN.

But not all shy away. Hawa Natou, 21, gave birth to her first son at Kenema on 3 October. “I wasn't scared to come. Lots of people were scared for me - my friends, my neighbours - but my parents said it was OK,” she told IRIN.