Read about what we achieved.
MONROVIA

As the Ebola death toll mounts in Liberia, burial teams are having to contend with physical risk and trauma as they take charge of safely burying the dead, often in the face of local anger.

Ebola has killed 1,224 Liberians as of 6 September, according to the World Health Organization (WHO), with 68 percent of those deaths in the past three weeks. Cases are expected to continue to spiral across the country - 14 out of 15 counties have reported cases - with the bulk in the capital, Monrovia.

Government and Liberian Red Cross burial teams initially took charge of burying the dead but they could not begin to keep up with the needs and called on community members to take on this difficult task. Marcus Speare is the head of a burial team in Margibi County (next to Montserrado County), which is made up mostly of young men.

Each team receives a full training and members are paid US$300 a month.

"Even as I speak to you we just received calls from three communities to pick up dead people. The deaths are too much. Sometimes I get confused. I am in shock. Too many of our people are dying."

All day long Speare’s phone rings requesting his team to pick up more corpses. “We don’t rest. My phone rings all day every day. We are on our way right now to pick up dead bodies in the Palmwine Station Community and Tower Hill. Sometimes we get tired. But this is what we have chosen to do. We want to help our community. This fight cannot be left on government and partners alone,” he told IRIN by phone from Margibi County.

“It is too sad,” he continued. “We pick up all kinds of bodies. We collect women, men and what mainly bring tears in my eyes are innocent children who died from this disease… It is painful to bury our people in these kinds of numbers. It is too much to handle.”

Team-members must contend with rejection from their own families and communities, and anger and resistance from families they are trying to help, which at times turns into violence.

“Our vehicle has been attacked by angry residents on many occasions,” said Speare. “They have stopped us from picking up dead bodies from various homes. They say to us that we are responsible for the spreading of the disease. One group of youths threw stones at our bus that is used to collect bodies. But we remain very calm with them. We tell them that we also stand at risk to do this job. And that we are just helping. So there is no need to attack us.”

Sumo Wonder, a member of Speare’s team, told IRIN his parents have expelled him from the house. “They feel that I will infect them. Right now I am sleeping with my friend. They say I should return when the Ebola crisis is over,” Wonder told IRIN.

Team members must also cope with the shock of having to confront so many deaths, including those of friends and family members, says the Red Cross. A driver on a burial team in Kakata, capital of Margibi County, told IRIN he was exhausted.

“Even as I speak to you we just received calls from three communities to pick up dead people. The deaths are too much. Sometimes I get confused. I am in shock. Too many of our people are dying.”

Emmanuel Togar, member of a burial team in Kakata, the capital of Margibi County, told IRIN: “Sometimes I cry when I see someone my own age lying in a pool of blood. It is too sad. I am out of words.” 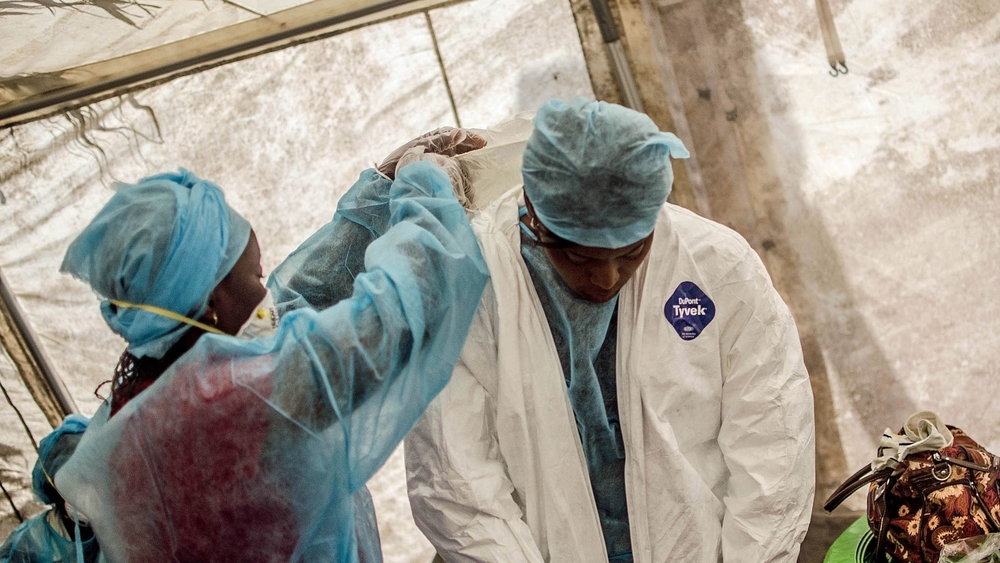 It is also stressful having to be mindful of one’s physical safety every minute of the day, says an IFRC briefing note on the psychosocial strain caused by Ebola.

Team members must wear a protective suit and goggles, boots and gloves covering every inch of their body, which can pose a high risk of heat exhaustion. “If we are not vigilant every minute of the day, then we too will die from it [Ebola],” said Togar.

As more burial teams are trained, the pace of picking up the dead quickened. In the first months overwhelmed burial teams would only get to bodies three or four days after they had died, greatly upping the risk of transmission to family members as the virus remains active even in a dead body. Now the pick-up rate is usually within the day, said Fiyah Tamba, secretary-general of the Liberian Red Cross.

Pick-up gaps are still leading to bodies piling up, however, particularly in Monrovia which is experiencing ongoing protests as a result - the latest one taking place in the Capitol bypass neighbourhood on 11 September.

But Togar says they are doing their best and need others to join them. “Now as soon as our phone rings we are on the move.”

As of 6 September 2014, some 4,269 probable, confirmed and suspected cases and 2,288 deaths had been reported in the current outbreak by the health ministries of Guinea, Liberia and Sierra Leone. NGO Médecins sans Frontières, WHO and affected governments have repeatedly called on international governments to step up their response if the disease is to be contained.