World Humanitarian Day this year brought grim news: More aid workers died in 2013 than any year since records began. In total, 155 were killed, while another 305 and were either seriously wounded or kidnapped, according to newly-released data from the Aid Worker Security Database. The number of victims was 66 percent higher than in 2012.

UN agencies, NGOs and academics are seeking ways to reduce the threats to staff even as they tackle a growing number of often-violent humanitarian crises.

Part of the debate is over quite how severe the problem is, with some keen to stress that humanitarianism is an inevitably dangerous activity. Larissa Fast, assistant professor of conflict resolution at the Kroc Institute for Peace Studies and author of Aid in Danger - The Perils and Promise of Humanitarianism, said that while the increase in deaths was concerning, “without context those numbers don’t mean a lot.” 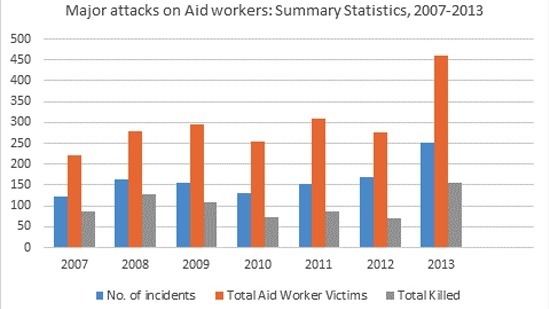 She pointed to the increase in the amount of aid work being done - spending by government donors has increased nearly 75 percent over the last decade - and better reporting of deaths, as mitigating factors. “It would hold that there would be an increasing number of incidents at the same time as an increasing number of operations.”

Yet she accepts that aid workers are now more threatened, with numerous conflicts involving actors hostile to foreign charities. "Aid agencies are willing to accept more risk and stay in places that are more dangerous than they might have done 10 years ago."

Adapting and adjusting to limit these risks is key, according to the Humanitarian Outcomes’ report accompanying the latest statistics. Among the key findings is the high number of attacks on NGO workers on the move. While vehicles have long been more susceptible to attack than armed compounds, more than half of the violent incidents in 2013 occurred in the context of an ambush or roadside attack.

The report identified a number of different strategies for travel that had been employed, including regularly alternating routes, keeping a low-profile and road reconnaissance.

Another mechanism by which aid agencies have sought to improve their travel security is through better sharing of information. In recent years, coordination bodies have been established in Afghanistan, Yemen, Gaza and elsewhere to help NGOs negotiate security issues, such as which roads are safe to travel on.

The most recent addition to such bodies is The Safety & Security Committee for Lebanon (SSCL), a body funded by European Commission humanitarian aid arm ECHO, which facilitates the sharing of security information between UN bodies, as well as local and international NGOs. Lebanon has seen continued low-level violence throughout 2014, with Islamic State militants briefly claiming a strategically important eastern town earlier this year.

The networks have been strengthened by their ability to adapt. When the first information-sharing networks were formed a few years ago, he said, they sought to push all agencies into the same security policies, often leading to tensions as NGOs worried about their independence. “The UN would have one approach [to security], which might be more protective, while NGOs would be much more [focused on] acceptance. That meant they became wary of sharing information.”

Over time, however, information-sharing networks have become less prescriptive, instead seeking to give agencies the power to devise their own policies. “What seems to have developed really well is the recognition that the information sharing does not have to be linked to the strategy. On one level you share safety and security information and on another level it is up to organizations what they do with it.”

While deterring and avoiding attacks are short-term fixes, the ultimate goal for humanitarians is often acceptance of their work by all parties. Kroc Institute’s Fast said that in recent years there had been a growing perception of a disconnect between aid workers and the people they are supposed to help - a debate little helped by the tougher security measures they have often been forced to take.

“There needs to be a return to recapturing the purpose of humanitarianism,” she said, stressing that walled compounds for aid workers also created the perception of being foreigners. “Security [needs to act] as part of the relationship [with the recipients] as opposed to thinking of increasing ways to separate aid workers from the people they are working with.”

Many of the countries where insecurity is highest host radical groups that control large areas, with four of the top six most dangerous countries - Afghanistan, Pakistan, Somalia and Syria - home to militants allegedly linked to Al-Qaeda.

Threats to aid workers in Iraq have also risen in recent months as the militant group calling itself the Islamic State (IS, previously known as ISIS) has captured huge swathes of territory, displacing hundreds of thousands; while the withdrawal of US-led forces from already dangerous Afghanistan at the end of 2014 could lead to more territory in the hands of the Taliban.

Negotiating deals with such groups can be a challenge for aid actors, yet a new study from the UK-based Overseas Development Institute’s Humanitarian Policy Group appears to support Fast’s argument about the need for engagement. The three-year research project focused on aid workers dealing with the Taliban in Afghanistan and Al-Shabab in Somalia.

Ashley Jackson, the report’s author, said the aim was to systematically study attitudes towards aid workers by Islamist groups. “We really wanted to talk to ground level fighters, mid-level commanders and the senior leadership because we didn’t feel that had been done before.”

The key finding, she said, was that agencies should commit significant resources to developing and maintaining relationships with figures at all levels of Jihadist groups. “A lot of agencies are afraid to address the problem head on,” she said, adding that many NGOs were worried about the high costs of building such networks in terms of manpower and falling foul of counter-terrorism legislation if they interacted with banned groups.

“What you often found was there was this ‘don’t ask, don’t tell’ environment where senior managers were sitting away from the actual programming denying [that they dealt with Jihadi groups] but maintaining that they had access as… ‘communities’ protected them. But when we spoke to the field workers on the ground they gave a dramatically different story - they would [admit] they work with Al-Shabab all the time.”

This shifting of responsibility to the lowest level of authority, she said, was likely to lead to corruption and a lack of organized relationships and also increases the risk of misunderstandings between aid agencies and militants that led to killings and kidnappings.

So far in Iraq and Syria these structured approaches do not appear to be in place. Some of the NGOs that were already operating in areas now controlled by IS have been allowed to stay and provide services, though some employees have been arrested.

Yet one NGO worker whose organization works in IS areas in Syria said so far little had been done across the sector to discuss normalized rules. Anti-terrorism legislation meant that NGOs were petrified of being seen to formally accept IS and other militant Islamist groups. “How can we pay our staff who live in that area when we know they will be forced to pay taxes directly to IS?” the NGO worker asked.

Yet for Jackson the dangers of not negotiating with such groups are far higher. She said that in Iraq the situation was perhaps still too volatile for aid agencies to start delivering in IS areas but that they should be thinking about how to do it safely.

“Starting dialogue early is the critical thing, even if it is just talks about talks or informal communication that helps you as an aid agency understand who you might talk to when the situations are more permissible for access,” she said.

Other techniques may be necessary to help facilitate humanitarian access with Islamist militants. To better understand legal systems in place in areas where groups may not accept international humanitarian law, humanitarians are increasingly being trained in Islamic law, while Fast said she was beginning research into whether faith-based actors were more able to make agreements than secular ones.