Bangladesh is moving to boost maternal health services in poorly-served rural areas by targeting voice and text messages at expectant and pregnant mothers and their families. The aim is to educate and support mothers in places where health services are weak.

“There is a gap between rural and urban areas in terms of maternal health services. Government and non-governmental organizations must address the gap to meet the Millennium Development Goals (MDG),” Iqbal Anwar, a reproductive health researcher at the International Centre for Diarrhoeal Disease Research, Bangladesh (ICDDRB) in Dhaka, told IRIN.

At a seminar in Dhaka on 25 June, Health Minister Mohammed Nasim admitted there were visible rural care gaps, saying: “Bangladesh has made remarkable successes in the health sector. [However,] it does not appear when I go to villages that things have improved. People say they are not getting services. Doctors cannot be found in hospitals.”

The minister said the government hoped to use technology to ensure health access for everyone, echoing Finance Minister AMA Muhith, who in his June 2014 budget speech said: “We will be trying to provide easy access to reproductive health service delivery system... We are working on expanding tele-medicine services.”

In 2012 the government partnered with Mobile Alliance for Maternal Action (MAMA), a network of public health organizations, to launch a project called Aponjon, which delivers timely health information to new and expectant mothers by SMS text and voice messages.

According to ICDDRB’s Anwar, “access to maternal health care is still low and quality of care is poor both in public and private health care centres [because] rural areas are suffering from a lack of trained health care service providers.”

Kirsten Gagnaire, executive director of MAMA, explained that the focus on mobile phones was a reaction to trends observed by public health experts.

“Approximately 5,200 Bangladeshi women died [in 2013] from mostly avoidable causes related to pregnancy and childbirth, and three out of four women deliver their babies at home,” Gagnaire said. “Yet Bangladesh has an increasingly high number of mobile phones activated across the country.”

Aponjon, which means “dear one”, sends pregnant women, mothers with newborn babies and family members health messages by voice recording or SMS. More than 350 messages target women and their husbands and mothers-in-law with crucial health information.

A father and child at a clinic in Bangladesh. Text and voice messages through the "MAMA programme" help all family members support healthy childbirth and early days of life. 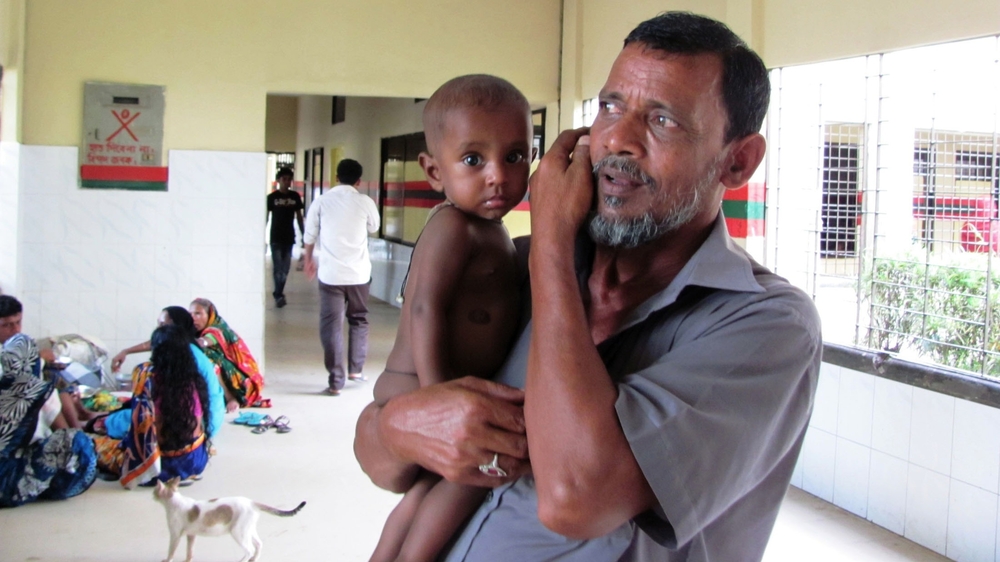 “We tried to make the voice messages interesting and entertaining,” she said, explaining that the recordings vary from direct instructions to “mini-skits” that feature voices playing roles such as mother and doctor.

The process starts before birth. Advertisements in local newspapers and on TV encourage expecting parents to dial a phone number to register for free.

Initial messages contain information on pregnancy symptoms, nutrition and safe and unsafe behaviours while pregnant. When the baby is born, the parents send an SMS to alert the system so it can adjust; it responds immediately with baby care instructions, information about disease prevention and treatment, and breastfeeding.

Nasreen Sultana, 25, a new mother in a village in Tangail District, 100km northeast of Dhaka, told IRIN mobile voice messages helped her during her pregnancy.

“I did not know many things about safe motherhood and I was hesitant to ask about them to any doctor or nurses but I have learnt this from messages,” she said.

Abul Kalam Azad, additional director-general of the Directorate General of Health Services, said the government’s maternal health efforts are multi-faceted, but mobile phones are a crucial aspect because the outreach goes beyond mothers.

“Most importantly, the husbands, mother-in-law and other family members who play important roles often cannot go to medical centres to learn about safe childbirth - and mobile health services are helping them as well,” he said.

“Aponjon... has been able to reach 500,000 subscribers on a truly national scale, with subscribers residing in all 65 districts of Bangladesh,” MAMA’s Gagnaire said, adding that during a recent visit to rural Bangladesh, one mother told her that text and voice messages taught her how to bathe and feed her eight-month-old daughter.

“Deployment and retention of trained human resources in remote rural areas is a major challenge for Bangladesh,” ICDDRB’s Anwar said. “Mobile health services are helping in many ways [to fill the gap].”