More than a decade after Myanmar achieved an important public health benchmark by declaring leprosy “eliminated”, progress in the fight against the disease and the disabilities it causes is patchy, experts warn.

In 2003 Myanmar achieved the World Health Organization’s (WHO) target of eliminating leprosy as a public health issue, meaning it recorded less than one case in every 10,000 people.

National prevalence based on identified cases is less than 0.5 cases per 10,000 population today, according to WHO, but concerns remain.

“The major issue today is that since that [2003] benchmark of elimination was reached, complacency about leprosy has become the norm,” Myo Paing, national programme officer for leprosy at WHO in Myanmar, told IRIN.

“It was an important interim target, and a lot of hard work went into achieving it, but people became complacent after it was declared,” he said, adding that public awareness about the disease, as well as health worker skills to identify symptoms and diagnose leprosy, have lapsed.

“When the government announced `elimination of the leprosy’, people thought the country became a leprosy-free country,” said Tin Shwe, liaison officer at the International Federation of Anti-Leprosy Associations (ILEP) office in Myanmar.

According to WHO, 2,950 new cases were detected and registered for treatment in 2013 (423 of them presented with visible disability) - a rate Paing calls “worryingly slow progress” on a disease that causes skin sores, nerve damage, and muscle weakness - sometimes to the extent of disability.

In 2013 the government of Myanmar signed the Bangkok Declaration for a Leprosy-Free World along with 16 other governments, the core goal of which is to reduce “the occurrence of new cases with visible deformity to less than one case per million by the year 2020”. Early detection, diagnosis, and treatment are needed to prevent disability.

New programmes to re-invigorate healthcare providers and public awareness are under way, experts say, but need to be accelerated to reach that target.

“The most effective way of preventing disabilities in leprosy, as well as preventing further transmission of the disease, lies in early diagnosis and treatment,” say WHO guidelines.

Ko Ko Oo, 28, who lives in Yangon, did not know it was vital to seek treatment early.

After his parents died during his youth, he moved in with a friend. But when he discovered he had leprosy in 2009, his friend threw him out for fear of infection.

Ko Ko Oo lived for several years on the streets of Yangon, sleeping behind a monastery.

Staff at a Mayan Chaung leper colony outside Yangon were notified about him and started him on treatment in late 2013.

“Had I known earlier [that treatment was available], I could have prevented these,” he said, pointing at dark spots on his skin. “Now, I’m late. I have to take whatever happens to me.”

Ko Ko Oo, 28, had little awareness of leprosy when he was diagnosed in 2009 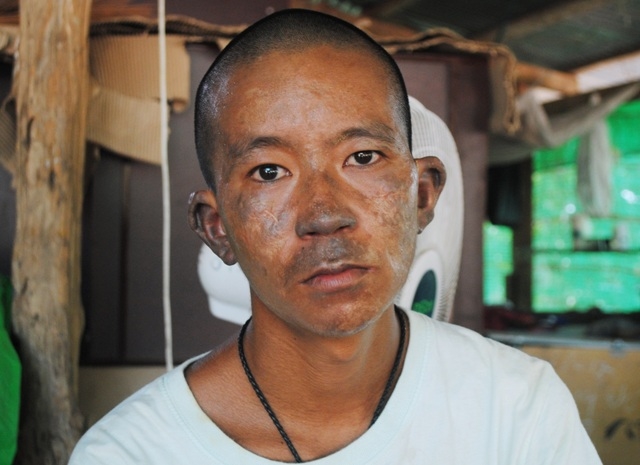 In the 1950s, Myanmar had one of the highest rates of recorded leprosy in the world, according to ILEP and the combined efforts of international and local agencies reduced the numbers through public awareness-raising, training of healthcare workers, and early treatment.

“While the government continues to support the National Leprosy Control Programme… funding to the programme by the government naturally couldn’t stay on high priority,” said Zaw Moe Aung of Leprosy Mission International, a care and support charity.

WHO’s Paing explained: “There are many other infectious diseases that appear more urgent - such as HIV, tuberculosis, and malaria - because there is more media attention and trainings for healthcare workers focused on these.”

“We see our staff having more interest in these diseases and not leprosy, even though this new [Bangkok Declaration] target is on the horizon,” he said. “Older healthcare workers who lived in the era when leprosy was a top priority and saw many cases, have the skills to make a diagnosis, but younger healthcare workers see it in textbooks but maybe not in the clinic so it becomes less of a priority in their minds.”

In response, WHO is working with the government to include leprosy-specific training in healthcare staff curriculums, including using visual aids and arranging for younger healthcare professionals to be partnered with veteran staff who have more experience with leprosy cases.

“We need to accelerate these approaches to get leprosy awareness back up or we will not meet the 2020 target. Early identification of symptoms - by people themselves and by healthcare workers - is the best way to prevent disability,” Paing said.

The most recent international data show that 12,225 new leprosy cases with visible deformity were detected worldwide in 2011, a slight reduction from 2010.