Data collected at a hospital clinic for malnourished children in the Central African Republic (CAR) suggests that many of the childrens’ parents present symptoms of post-traumatic stress directly linked to their exposure to extreme violence, according to the NGO Action Against Hunger (ACF).

The country has been in turmoil for more than a year, and ethno-religious violence since December has forcibly displaced hundreds of thousands of people.

Stephanie Duverger, a psychologist working for ACF, told IRIN that in interviews with 156 parents of children treated for severe acute malnutrition (SAM) at the Complexe Pediatrique in the CAR capital Bangui, 60 percent described having symptoms suggestive of post-traumatic stress disorder, although they might not develop the condition.

Many case histories related by parents show that horrific experiences, fear and anguish arising from months of living with violence have reduced their capacity to care for their children, thereby possibly triggering, or aggravating the circumstances leading to illness.

Six-year-old Gilbert’s story is an example of how trauma affects children directly and also through its effect on relationships, Duverger said.

“He showed signs of SAM and after demonstrating no appetite he was hospitalized,” she wrote in a report on his case. “After three days he still refused food, was apathetic, often aggressive, cried when approached, rejected milk and often seemed angry against any adult including his mother.”

Like many of the children treated for SAM at the hospital, Gilbert eventually had to be fed through a tube attached to his nose.

“An interview with the mother revealed what the family had been through,” Duverger wrote. “Gilbert, his mother, brothers and sisters had had to flee to the bush several months ago to escape rebels who attacked their neighbourhood, burned their house and committed atrocities.

“The mother thought the malnutrition was due to a change in his diet, because for several days in the bush they had had nothing to eat except manioc leaves. But it was only Gilbert who developed acute malnutrition. Seeing the way she hit him to make him drink, we hypothesized that violence had affected her behaviour.

“She said that after living in the bush, Gilbert was not as before. He had frequent nightmares, lost his appetite and started bed-wetting. She said this had exasperated her. She had often hit him and at one point had threatened to cut his throat.

“Even with the nose tube, Gilbert was not getting much better. It was removed and a difficult process began of encouraging him to drink milk. The mother was taught not to force-feed him. After initial rages, at the end of the week he was drinking his milk, starting to make requests and had stopped bed-wetting.

“We hypothesize that his refusal to eat was his way of saying no to additional violence.”

“It’s also hard for a lot of people to understand the importance of psychosocial aspects as opposed to life-saving treatments… but when you spend only a few days talking to the families, you realize that eating is not only physiological. It is also a question of having the right mental disposition.”

Interviewed by IRIN, the mother said Gilbert had been refusing to eat and had had temper tantrums which she had thought were capricious. In the hospital she had learned that these were the result of their traumatic experiences, and that she should comfort her children and play with them. She had noticed this helped them more than punishments.

Another mother with a child being treated for SAM, Carole Imandi, told IRIN her elder brother had been killed in front of her during the recent violence in Bangui.

“I often have flashbacks about my brother and the way that they killed him,” she said. “I lost my appetite and couldn’t care for the child when it had difficulties eating.

“I’ve learned a lot from a group I attended here at the hospital. I learned that instead of dwelling on bad experiences and problems, it’s better to play with my child because my behaviour affects him too.”

She also said she now realized it was important to vary the child’s diet, giving him vegetables, potatoes and eggs, instead of just rice, beans and soya every day.

A father of a 10-month child at the Complexe told IRIN: “My wife abandoned me, leaving me to look after our three children. During the worst of the violence we saw many corpses and fled to the bush. After that, I saw the child’s behaviour had changed. He had lost his appetite, cried at night and wet his bed and was more babyish than before.”

However, the father also said he did not have enough money to feed his children properly.

Trauma one of several risk factors

ACF is not suggesting that poverty and lack of access to food are not critical factors leading to malnutrition.

The malnutrition rate, according to ACF, is much higher in “Muslim enclaves” than elsewhere in CAR. ACF country director Nicholas Fuchs said this was because people do not have proper access to markets and are mostly unemployed in these places.

Duverger’s findings suggest that trauma compounds the effects of extreme poverty, adding to the risk of malnutrition developing.

ACF collected 1,008 individual counselling sheets at the Complexe Pediatrique in Bangui between October 2013 and March 2014, and found that 688 children (68 percent) refused to eat, either because of psychological distress or medical complications; 75 percent of parents had been exposed to traumatic factors and 50 percent had been force-feeding their children or punishing them violently.

“But I would say definitely a high level of stress can prevent parents providing adequate care for a child, which can lead to malnutrition.”

Detailed studies appear to be lacking on links between trauma caused by violent events and malnutrition. The researcher P. Engle (who has researched several studies of child nutrition for UNICEF) writes that “the response to emergencies needs to include not only food and health but also care”, which she defines as “the behaviours and practices of caregivers that provide the food, stimulation and emotional support necessary for children’s healthy growth”.

In a 2005 study, Conceptual Models of Child Malnutrition, researcher Cecile Bizouerne (an adviser to ACF) asks whether the illness is often a consequence of a deficient affective relationship between mother and child, and concludes “there is no unique answer to the question.”

She points out that the etymology of the term “kwashiorkor” itself (a type of malnutrition where the patient has oedemas and discoloured hair) suggests the mother and child bond can be a possible cause of the symptoms.

(In the Ashanti language “kwashhiorkor “is used to describe first born children neglected by mothers in favour of younger children.)

Duverger believes other risk factors for malnutrition in CAR, besides trauma and extreme poverty, include the high incidence of one parent families, and traditional beliefs.

She hypothesizes that most of the children admitted to the clinic have previously been treated by traditional healers, pointing to the “fetishes” they typically wear around their necks as evidence.

“These healers cannot cure the children,” she said, “but because children are taken to them first they are often in a very bad state by the time they reach here.”

The Complexe Pediatrique is the only hospital in Bangui offering free treatment for SAM with children who also have medical complications, and the only one integrating psychosocial dimensions with a specialized counselling team, (consisting of Duverger and 10 other “care practice” local staff).

The NGO treated 4,664 children with SAM in Bangui between last October and March.

Putting these children on the road to recovery can take several weeks. Once they are stabilized and feeding normally they are discharged from the hospital but continue attending outpatient clinics once a week, until they regain their target weight. ACF also supplies the most vulnerable families of malnourished children with food coupons for three months.

Children in the Central African Republic are reflected, amid clouds, in a pool of water 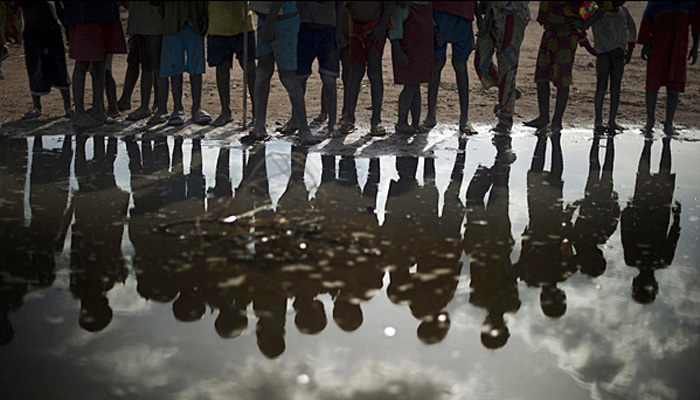 Initially children are admitted to a ward and after their condition has stabilized they spend much of their time in a play space (a large tent equipped with toys) where their feeding is monitored and the staff advise parents on care practices.

“When they first come here we tell the parents the children’s recovery is up to them,” care worker Privat Kala told IRIN. “We try not to condemn their habits, but instead propose to them a new way of tackling the symptoms and understanding the causes.”

Modern psycho-social counselling is virtually unknown in CAR except where a few organizations - ACF, Save the Children (SCF), UNICEF and Cooperazione Italiani - employ counsellors.

A child protection adviser for SCF, Julie Bodin, told IRIN her organization is working with children aged 5-18 in CAR, and “facing the same psychosocial issues as ACF, but at a later stage in their development”.

She said SCF does not have detailed psychosocial data on these children but her general impressions support Duverger’s findings.

“We plan to hire a psychologist here,” she added. “As people leave the displacement sites to go home and we move from an emergency phase to a post-conflict phase, we are finding ourselves more involved in discussions with parents about psychosocial issues.”

There is currently no counselling aimed at the carers of 0-6 month-old children, a gap that Duverger hopes donors can fill.
In the longer term the country needs more psychiatrists and psychologists, she argues.

“There is currently only one qualified psychologist for the whole CAR population of 4.6 million people”, she said.

“Donors have expressed an interest in expanding psychosocial programmes but underestimate the time it takes to rebuild family bonds. It takes expertise to train the staff and monitor the activities, which unfortunately are often seen as not cost-effective enough.

“It’s also hard for a lot of people to understand the importance of psychosocial aspects as opposed to life-saving treatments… but when you spend only a few days talking to the families, you realize that eating is not only physiological. It is also a question of having the right mental disposition.”