Human rights activists have strongly criticized the provisions of a proposed Truth and Reconciliation (TRC) bill, saying it could grant amnesty to Maoist combatants and government troops for alleged crimes committed during the country’s decade-long civil war.

“This draft bill will not advance [us] but create more obstacles to the peace process,” human rights lawyer Mandira Sharma told IRIN.

“This bill encourages impunity and will not help in moving the nation forward,” said Rameswar Nepali, Amnesty International-Nepal country representative.

Both the army and the Maoist rebels were accused of committing atrocities during the conflict which ended in 2006. More than 16,000 died; Maoists, soldiers, and police were regularly accused of serious human rights violations, including killings, rape, torture and forced disappearances.

"The victims of the conflict will never get justice with this bill and we condemn it strongly," said Ekraj Bhandari, president of the Enforced Disappeared Families Society in Kathmandu.

A report by the International Committee of the Red Cross (ICRC) accused the government of “inadequate inclusion of victims and family associations in the transitional process” and said 15 percent of families of disappeared or missing persons they surveyed reported they could envisage starting a new insurgency if these issues were not addressed.

This iteration of the TRC bill, introduced in parliament on 9 April, follows a string of attempts at transitional justice in the country, which the Geneva-based human rights organization TRIAL in 2013 said “failed to meet international standards”.

Nepali rights activists point to specific sections of the new bill, which they say remain too vague on issues of granting of amnesty for perpetrators of war crimes. However, despite such criticisms, political parties are convinced the current bill is sufficient to move the impoverished country forward.

Local villagers in Dhading have waited too long for the truth and reconciliation bill now before parliament. Nepal's decade-long conflict ended in 2006 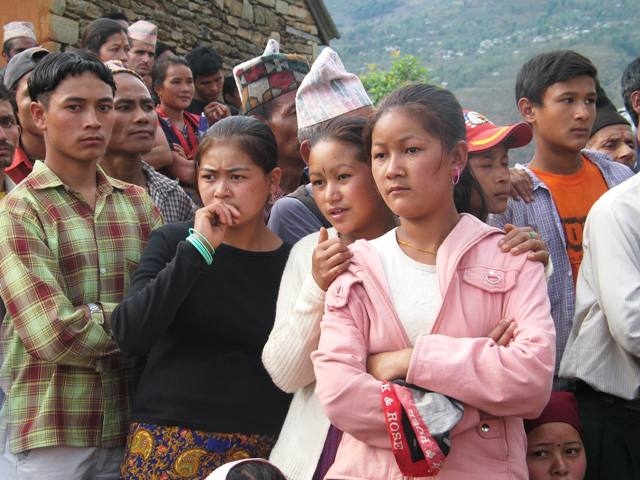 Activists say the draft bill contains some provisions that are weak on prosecuting perpetrators, and violate international law.

The International Commission of Jurists said one section “contains vague language that does not completely reject amnesty, leaving open the possibility that perpetrators of these crimes might instead benefit from an amnesty.”

Victims’ families and activists remain adamant that they deserve justice for the crimes committed by the state or former Maoist rebels.

“My daughter was murdered inhumanely by government forces and these perpetrators should be tried,” said Debi Sunwar, the mother of 14-year-old Maina, who was allegedly tortured, raped and killed in 2004.
Activists accused the government of intending to pass the bill to save time to complete the new constitution in time.

A 601-member Constituent Assembly elected in 2008 to write a new constitution failed in four years to produce the charter and was dissolved in May 2012; the second assembly was elected in November 2013.

“The government is implying that it will give amnesty for even the heinous crimes through this bill, and this will traumatize the victims more and create more conflict in the society,” argued political analyst Mumaram Khanal.

Bill drafted “for the sake of victims”

Others believe such critiques are misguided.

“We have not even finalized anything,” said Dilendra Badu, spokesperson of Nepali Congress (NC), the leading party in the current government. “The bill is being framed based on the provisions in the peace treaty,” he explained, pointing at the 2006 Comprehensive Peace Agreement (CPA) , signed by the government and the Maoist rebels, which mandated a truth commission “to probe into those involved in serious violation of human rights and crime against humanity in course of the armed conflict.”

A 2014 report by The Asia Foundation noted: “There is no mention at all in the CPA regarding... the establishment of prosecutorial mechanisms” and argued that “the politicians who negotiated the peace agreements... neither understood the nuances of transitional justice nor were particularly keen on its implementation.”

Maoist parliamentarian Ram Narayan Bidari accused human rights activists of overreacting to the bill on the “whims of their international networks”.

“The bill isn’t perfect, but it still favours the victims and we will object to anything that violates human rights laws,” he said.

“The bill is not even complete and there are already protests without fully understanding the bill, which has been drafted for the sake of victims,” said Narhari Acharya, the minister of law and justice.

“We all want a healing process through reconciliation so that the peace process will be fully achieved and we can all move forward,” he said.