On the surface all looks well: the sky above southern Jordan is deep blue and the sun is shining over fields of wheat and barley. Some families are out playing in the fields and celebrating the first glimpse of spring.

But for farmers like Hatmal Halaseh, things are gloomy. “Winter is over and the land is still thirsty. It is looking like a very dry year,” said the 60-year-old as he wandered between the fields inherited from his grandparents and planted for the past four decades with wheat.

Jordan’s agriculture relies on the rain that falls heaviest in December and January. This year has been exceptionally dry.

A statement by the Ministry of Water on 22 February warned that the country and the region as a whole are witnessing the “driest season in decades”.

The total rainfall in Jordan from the beginning of the 2013-2014 rainy season to the end of January 2014 is 2,608.8 million cubic metres (mcm) was almost 31.3 percent of the country’s long-term average annual precipitation, compared to 6,371 mcm, almost 76.6 percent, the previous year, the statement noted.

The ministry warns that the country’s dams hold only 43 percent of their total capacity of 325 mcm. Jordan’s is one of the world’s most water scarce countries, with an annual per capita water supply of 145 cubic metres - less than 15 percent of the UN defined 1,000 cubic metre “water poverty” line.

Farmers and experts say the dry weather is only a continuation of poor weather over the past few decades that has left them struggling.

A study (not online) by the former head of Jordan’s Meteorological Department, Abdul Halim Abu-Hazeem, indicates an 8 percent decrease in the country’s rainfall from 2001 to 2010. Eastern and southern parts of the country were affected most, the study noted.

“ ...as one cannot predict the future, we can only continue to hope and wait to harvest the fields ”

Rain-fed crops such as wheat, barley, beans and olives have been adversely affected, experts and farmers say.

By February, wheat should normally be 70 cm high, farmer Halaseh said, but now it is barely 15 cm, a trend he has been noticing over the past two decades.

The rainy season should be under way by the end of September or early October, said Adel Abdul Ghani, professor of agriculture studies at Mu’tah University in Karak Governorate, but in recent years the rains had come later. This winter the first rainfall came on 1 November.

“Repeat dry years due to changing rainy seasons and a shortage of rainfall observed since 1994,” said Ghani, discouraged many farmers from planting their fields as they were “no longer profitable”.

“Until the 1960s, we used to export wheat and grains, but now what we produce is only enough to meet the country’s needs for [a few] days,” he told IRIN. The country imported 95 percent of its wheat needs in 2010, and 98 percent in 2011, according to Jordan’s Department of Public Statistics.

Jordan’s National Centre for Agricultural Research and Extension (NCARE) has attempted to produce resilient wheat as an adaptive technique to cope with the increasing dryness.

“By surveying a variety of wheat grown locally in Jordan, we realized that an adaptive trait is early flowering and early maturity, which helps plants escape dry weather,” said Nassab Rawashdeh, a researcher on climate change and biodiversity at NCARE.

This year marks the sixth year of breeding the new variety. “It has succeeded in the southern governorate of Shawbak under extremely dry conditions,” said Rawashdeh. But while some farmers have taken up the new variety, it still has not been adopted countrywide.

Meanwhile, the expected poor harvest is already leading some farmers to try and cover their costs by selling their wheat and barley fields to herders as fodder for their goats. “By doing so, I can earn some money to pay the cost, but if I wait for the harvest season, I know I am only awaiting loss,” said farmer Abu Mahmood from Karak.

Olives, a major source of income for many families, have also been affected by shifting rainy seasons, said Mohammad J. Alatoom, head of the Environment & Climate Change Portfolio at the UN Development Programme in Amman.

“Farmers used to wait for the first rainfall to harvest their olive trees, but due to the delays nowadays may harvest them before,” he said.

This winter, olive farmers faced a new challenge when the Alexa cold snap brought around half a metre of snow to some parts and destroyed more than 60 percent of olive trees in northern Jordan, according to Nemer Hadeeden, spokesperson of the Ministry of Agriculture.

“It is awful, when it is your only source of income,” said farmer Nabeela Meghdadi. After more than 50 percent of the trees were damaged, she said she was now looking for other sources of income as farming had “proved unreliable”. 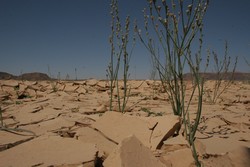 According to Nassab Rawashded, researcher on climate change and biodiversity at NCARE, the storm is “a form of extreme weather event resulting from climate change… This is a result of climate change impact. This is severe weather which we are not used dealing with.”

However, other experts warn it is too early to say climate change is to blame for current weather patterns, for which data is limited.

“It is very difficult to tell whether a certain event is a result of climate change, as we do not have sufficient statistics or studies to refer to,” said Alatoom of UNDP. “It takes long years to assess the impact anyway.”

In 2013 Jordan launched a national policy to adapt to climate change across various sectors including agriculture, but implementing the strategy is challenged by a “lack of coordination”.

“The next key step is to better coordinate between governmental institutions to achieve goals of the strategy,” said Andera Dahabai, in charge of the climate change portfolio at the Ministry of Environment.

Also, as climate change policy is not “mainstreamed into other national developmental strategies” it could threaten Jordan’s progress towards achieving Millennium Development Goals.

“Climate change is a cross-cutting theme. Shortage of water and changes to the quality of water have effects on agriculture which could impact health, for example,” said climate change expert Amal Dababseh.

Earlier this month, Jordanians held Istiskkaa prayers, a Muslim tradition of holding prayers to call for rain during dry years.

But as the spring nears, farmers like Halaseh are left with diminishing hope of getting sufficient rain.

“Farming is like gambling. You have to accept the risk,” said Halseh. “But as one cannot predict the future, we can only continue to hope and wait to harvest the fields.”