In a classroom in a private school in Islamabad, Pakistan’s capital city, a group of fifth graders doing their history lessons are adamant when asked a question about conflict.

“Pakistan has fought three wars - in 1948, in 1965 and in 1971, all against India,” said Muhammad Asif, aged 10, standing sternly to attention as he responds. Like his classmates, he looks puzzled when asked if the country could still be engaged in a war.

But the figures for deaths as a result of conflict across the country say something quite different: according to the New Delhi-based South Asia Terrorism Portal which monitors militancy in the region, 5,379 people lost their lives in terrorist-related incidents in 2013. The majority, 3,001, were civilians.

The number has escalated sharply since 2005, and reached a peak in 2009 when 11,704 people were killed - mainly during a military operation against militants in the Swat Valley in Khyber Pakhtunkhwa Province. The violence continues to be widespread - even considered normal - with 460 killed already this year.

“For people like us, the ongoing violence, the terrorist attacks and then the military reprisals are a disaster,” said Saifullah Khan, a resident of Wana, the main town of South Waziristan, one of seven tribal agencies along the Pakistan-Afghan border. “We live in constant fear, people have lost jobs because businesses have shut down, and so many people I know have moved away permanently.

“Of course there is a war here. People die in bomb attacks, families have been destroyed and children know only of guns,” he told IRIN. He also spoke of farmers, whose lands had been destroyed, leaving them with no means to earn a living.

While the conflict against the Taliban is possibly the best known issue involving violence in Pakistan, there are many other pieces making up a larger and more complex picture.

According to a 2014 report by the Washington-based US Institute of Peace Studies, “during the past decade violence has become endemic across many parts of Pakistan.”

The detailed study notes the “origins and intensity” of violence varies by region. Other than the concentrated violence along the Afghan border driven by militancy, it describes growing sectarian violence in Gilgit-Baltistan and Balochistan, caused partially as a result of a “nexus between sectarian militants and terrorist outfits”.

“We see a continued escalation in this violence, and the impact on people’s lives is very negative. They lose security, opportunity, sometimes education and we live with almost constant fear ”

It also states there has been a 10-fold increase in violence in Karachi between 2006 and 2013, with sectarian groups, terrorist outfits, political parties and criminal gangs all playing a role.

In Balochistan the “scale, scope and magnitude” of violence is stated to be “unprecedented”, involving sectarian and terrorist violence combined with a secessionist insurgency which has, since 2006, led to a conflict with the Pakistan military. While the Punjab has experienced the least violence, it has turned into a key ground for recruiting militants.

Figures from the Islamabad-based Centre for Research and Security Studies’ (CRSS) Pakistan Conflict Tracker, which differ slightly from the South Asia Terrorism Portal, suggest 2013 was one of the deadliest on record, with nearly 6,000 people killed in militant, sectarian, terrorist and politically-motivated attacks.

“We see a continued escalation in this violence, and the impact on people’s lives is very negative. They lose security, opportunity, sometimes education and we live with almost constant fear. People are afraid to travel or even visit parks and other public places,” Fariha Nazir, a research fellow at CRSS, told IRIN.

Asghar Jalil, a banker in Quetta, said: “Of course we are affected; our lives have changed. My family moved here when I was an infant, it is my home. But now because of the threat to Punjabi settlers from Baloch nationalists, I hardly ever allow my three children to leave the house, except for school. We are fearful till their return.”

There have been a number of attacks on persons from other provinces living in Balochistan.

Others have been left in a particularly grim situation. “My husband died in a random shooting in 2010. My children are young, I can find no work, and though my brother-in-law helps sometimes we barely have enough to eat,” Jalila Bibi* told IRIN from Karachi. Two of her children no longer attend school because she cannot pay the fees.

A child's painting from Swat seeking an end to violence 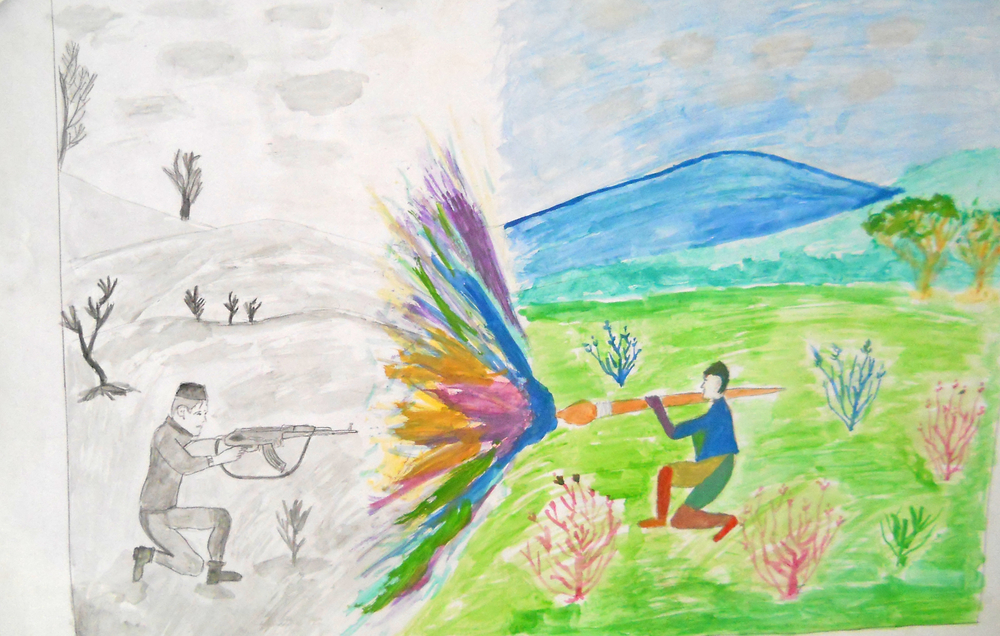 “It’s really quite simple. There is so much violence, most of it barely ranks as ‘big’ news,” said Asad Ahmed, a reporter at an Urdu-language newspaper, explaining why bomb blasts which kill nine or 10 people barely make single column news some days.

Organizations such as the Center for Civilians in Conflict, based in Washington, have taken up the issue of people in Pakistan caught up in violence, but as Ahmed says, this “does not really help anyone here.” In most cases the best victims can hope for is sums of money as ‘compensation’. This, too, is often paid after a long delay, and as Jalila Bibi said “does not really help much as the money soon goes and the victim of course is lost forever”.

“The state’s callous indifference towards the loss of human lives in a bomb explosion here and a suicide attack there virtually every other day is only matched by a state of resignation among its people, who seem to treat it as fait accompli,” said Kamran Rehmat, a former newspaper editor and political analyst.

“Pakistan may boast one of the largest growing nuclear arsenals and the seventh largest standing army, but the irony is that it has failed to establish its writ across its own state and the fundamental duty of ensuring the protection of its citizens from an unending cycle of murder and mayhem,” Rehmat told IRIN.

Most people feel they have no choice but to simply carry on. “I lost my son, daughter-in-law and grandson in the 2009 blast which killed nearly 100 in Peshawar in 2009. At the age of 80, I work as a labourer to support my other grandchildren. I have banned all family members from going to cinemas after recent blasts there. But beyond this, what can one do?” asked Azeem Khan. “We are helpless, but what choice do we have but to carry on till someone takes pity on us.”