I will support your work.
COLOMBO

Sri Lankan authorities have expressed concern over an increasing number of reports that children are dropping out of school in the conflict-affected north, where economic pressure and poor prospects are creating conditions that could have negative consequences for the future development of the region.

Most of the dropouts are from poor families who find it difficult to make ends meet as humanitarian assistance dries up almost five years after decades of civil war ended. This situation is being aggravated by an acute lack of job opportunities and a rising cost of living. “It’s a vicious cycle,” said Sivalingam Sathyaseelan, Secretary to the provincial Ministry of Education.

“The main reason is the lack of jobs. There is no money in these families, and they need everybody that can work, to work,” Sathyaseelan told IRIN. “They are able-bodied and can find odd jobs or agricultural work more easily,” so there is growing pressure on children in their early teens, mostly at secondary school level, to leave the classroom.

The top public official in Kilinochchi District, Rupavathi Keetheswaran, the government agent, agreed. She described the situation for the estimated 40,000 households in the north that are headed by women, or those families with disabled members, as particularly dire, saying, “Sometimes the children don’t have any option but to work. There is no one else to make money for the family.”

According to the International Labour Organization (ILO), these children generally find work doing temporary or manual jobs such as unskilled labourers in construction projects or on farms. “Sometimes the kids would just wander [around] ‘til they find odd jobs,” said Ramalingam Sivaparasgam, the ILO national project coordinator, who noted that some children work for as little as US$1.25 per day.

A study released in January by the UN Children’s Fund (UNICEF), analyzing out-of-school children in four countries - Bangladesh, India, Pakistan and Sri Lanka - says the island nation has close to universal participation in primary and lower secondary schooling, with just 0.07 percent of all primary and lower-secondary school-aged children not in school.

However, the data did not cover the districts of Jaffna, Mannar, Kilinochchi, Mullaitivu and Vavuniya, which comprise Northern Province, where the final days of conflict were fought out. “It is important to remember that the Sri Lankan data excludes five districts in the North where conflict took place, and rates of school exclusion are known to be higher than average,” the report points out.

Children living in the conflict-affected northern and eastern areas of the country have lower school participation than the national average, particularly in lower-secondary education, the report conceded, with child labour cited one reason for dropouts.

Older children and young adults were motivated to drop out because jobs commensurate with high school or university graduation levels were very hard to find. “They have to settle for manual labour jobs if they remain in the region, so why not take them [out of school] now?” said Sathyaseelan, the top provincial education official.

This is particularly true in the more remote, interior areas of the region, where facilities and job opportunities are often nonexistent, and little investment is taking place. “There are no private enterprises, [and] very few government offices in the villages. The only thing that is there, is construction of houses or farm work,” government agent Keetheswaran confirmed. 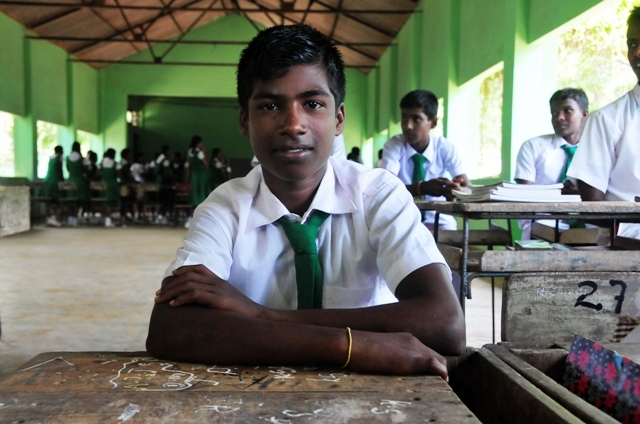 Ramadhas, a father of two girls, returned to the Visvamadhu area of Mullaitivu District in mid 2010, but was forced to take his oldest daughter out of school when he was no longer able to provide for his family with the meagre money he earned from his small vegetable garden.

“About a year after we returned, we had hardly any money, but there was a good market for scrap metal that could be collected. She skipped classes and came with me to collect metal,” he said.

The father and daughter team earned just over $2 for every kilogram of scrap they collected, much of it left over from the war. But since then the scrap metal market has become less lucrative. His daughter, now 14, has started doing odd jobs instead and he doesn’t know whether she will ever return to school to complete her education.

Although he doesn’t want his other daughter to leave school, the prospects don’t look good. “I have given up farming. Now I also work as a labourer, and the family income depends on what she makes,” he said.

According to ILO, the longer a child stays away from the classroom, the harder it is for them to catch up. “There are no night classes or extra classes for such dropouts right now. Without such assistance they find it extremely difficult to rejoin their studies,” Sivaparasgam said.

But without targeted programmes to identify drop-outs and help them, there is also no effective way of persuading them to return to school. “More so when money is very hard to come by for families,” he said.