This article is part of our in-depth coverage. Read more like this...
BOZOUM

Dewa Iliassa, a young Muslim, lives on a street in Bozoum, a town in northwestern Central African Republic (CAR), with only a small pile of his belongings. He says he is too scared to move more than about 200m in any direction.

He and 2,500 other Muslims have gathered in the centre of Bozoum, one of the few settlements in the area where people from his community are protected by international peacekeepers. But the protection offered in Bozoum extends over a very small area.

“If we go beyond the street corner, the anti-balaka [militia] will make us pay something or could even kill us,” Iliassa said.

Muslims, particularly in the west of the country, face attack by the anti-balaka, militias formed to oppose the Seleka, the largely Muslim rebel group that overthrew president Francois Bozize in March 2013. (Though the Seleka forces were officially disbanded in September, its fighters remain active in parts of the country.)

“Many Muslims have been killed here. Of the people that I know, it could be 15,” Iliassa said. “I was born here and so were my parents and grandparents, but now we just want to get out to Chad because the Christians don’t want us here.”

Saleh Ibrahim, a neighbourhood headman, tells IRIN that everyone in the community wants to leave the country but they cannot get out by the roads, which are controlled by the anti-balaka.

“We can’t leave and we can’t stay,” he said. “Our houses and shops have been looted, there is nearly nothing to eat, and most people are sleeping outside.”

He acknowledged that aid workers are providing some services to this open-air ghetto. Médecins Sans Frontières (MSF) is running a mobile health clinic, and a local priest, Aurelio Gazzera, has been supplying bags of rice, while UN agencies are providing water.

We can’t leave and we can’t stay. Our houses and shops have been looted, there is nearly nothing to eat, and most people are sleeping outside

The situation is similar in Bouar, a larger town about 100km from Bozoum.

Aid workers in Bouar told IRIN there are between 17,000 and 20,000 internally displaced people in Bouar, both Christians and Muslims, and although a detachment of Cameroonian peacekeepers has been posted to Bouar, they are not in full control.

The local coordinator for MSF-Suisse, Narcisse Wega, said: “The town is controlled by the anti-balaka. The Muslims are in a sort of prison, an area of just a few streets. The anti-balaka commander said he would not advise Muslims to leave this area because he could not guarantee what would happen to them.”

Muslims were about 20 percent of Bouar’s population of 47,000, and are thought to have been about 15 percent of CAR’s total population. Tens of thousands of Muslims have left the country since inter-communal violence flared in early December.

After pushing the ex-Seleka from many towns in recent weeks the anti-balaka have taken control of more areas in the northwest and have started attacking Muslim convoys.

In mid-January, a grenade thrown at a lorry transporting Muslims near Bouar killed 23 people. After that incident, hundreds of truck drivers have refused to cross into CAR. The World Food Programme (WFP) managed to persuade a dozen out of 38 contracted drivers to bring in supplies with an armed escort last week, but others transporters, particularly Muslims, are still reluctant to cross the border.

The growing strength of the anti-balaka has also made it more dangerous for Muslims to gather for evacuation.

More than 50 Muslims waiting for transport at the town of Bossembele were killed on 16 January, according to Amnesty International, and attacks on Muslim civilians have also been reported at Bozoum, Bossemptele, Yaloke, Boali and smaller settlements. 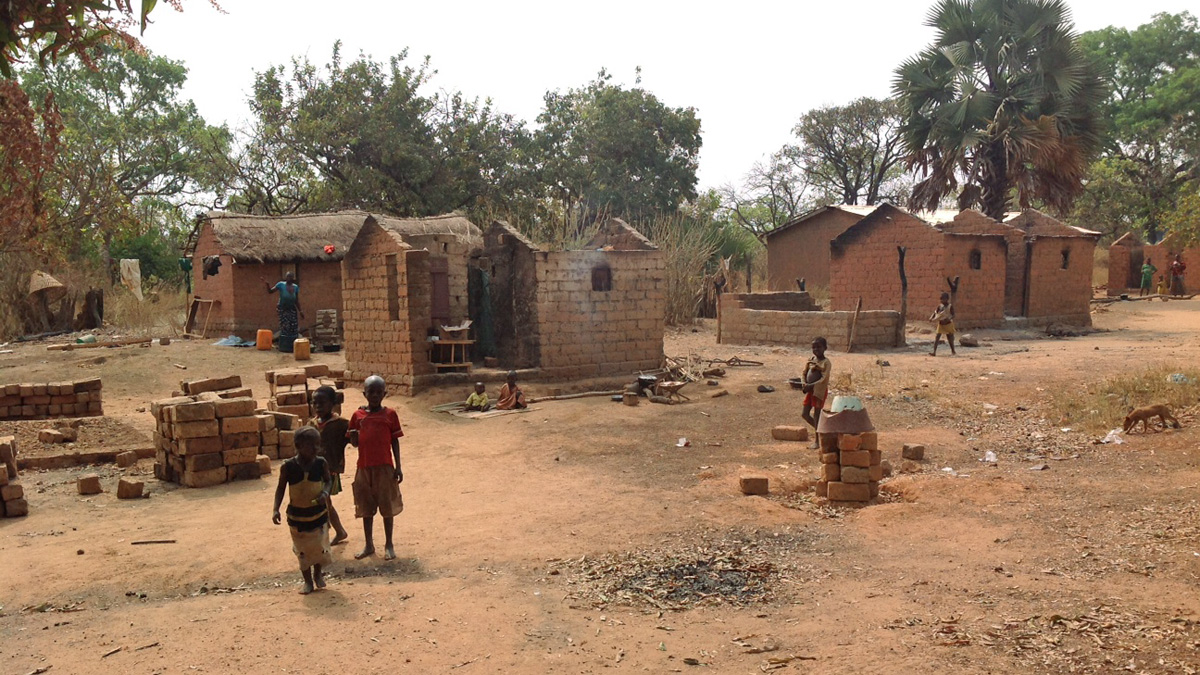 The ex-Seleka and their Muslim allies committed many atrocities last year, including killing hundreds of civilians in the capital, Bangui, in December. In some areas, non-Muslims are still bearing the brunt of the inter-communal violence.

On 16 January the ex-Seleka and their allies killed about 100 non-Muslim civilians in the town of Baoro, Amnesty International reported. In the past week more than 75 civilians, mostly non-Muslims, have been killed in communal clashes in Boda, according to Cassien Kamatari, a local priest.

While there are peacekeepers and aid workers at Bouar and Bozoum, most of the smaller settlements are without any security or assistance.

Amnesty International has been calling for over a week for peacekeepers to be deployed to Bossemptele, another town on the main road to Cameroon, the organization’s Donatella Rovera told IRIN.

She said the anti-balaka have been terrorizing hundreds of Muslim internally displaced people (IDPs) who have taken refuge at the Catholic mission in Bossemptele.

“On February 1st, they abducted three IDPs,” she said, “but eventually gave them back, and on February 3rd, they beat up an IDP and threatened to kill injured IDPs in the mission hospital.

“A MISCA [African Union Support Mission in CAR] convoy passed by Bossemptele and went to the mission on February 3rd, but did not take IDPs with them. The priests and nuns at the mission are increasingly worried as the situation deteriorates and the threats become more frequent and more concrete.

“Where MISCA are deployed, they have made a difference,” she added. “The anti-balaka are poorly armed and no match for them. But the MISCA need to get out to more of the places where they are needed.”

A spokesman for MISCA, Eloi Yao, said the interior of the country is a priority for the force.

“We will do what is within our means, and we are deployed at churches and mosques, but it is very hard to get to every little spot,” he said. “We don’t carry people in trucks - that is not part of our mandate - but we try to create humanitarian corridors.”

MISCA has been deploying more of its 5,500 troops outside the capital in recent weeks. Most of the 1,600 French peacekeepers in the country are deployed in Bangui. Inter-communal violence has continued in Bangui; the Red Cross reported last week that 30 people were killed there in three days.

Under pressure from the anti-balaka, as well the French and MISCA forces, most of the ex-Seleka who were in Bangui have now left or are confined to one camp there, and in the past weeks the peacekeepers have been taking more robust action against the anti-balaka.

A MISCA soldier in Bouar, who preferred to withhold his name, told IRIN that peacekeepers stand a much better chance of restoring order when they are dealing with only one armed group, rather than two.

A debate nobody wants

Until recently aid agencies were not involved in the evacuation of Muslims from the country. The International Organization for Migration has been chartering planes in recent weeks to evacuate Chadians; by 20 January, it had evacuated about 2,200 from Bangui, with help from the UN Refugee Agency (UNHCR) in the case of about 200 Chadians with refugee status in CAR.

Asked if aid agencies should be helping to evacuate more people, Rovera said: “Nobody is debating this on the record. Agencies are reluctant to be seen as facilitating ethnic cleansing. Our position is that people should not be forced from their homes and there should be more protection.”

Nobody knows how many Muslims or Christians in western CAR might wish to be evacuated from their home areas, a possibly irreversible step for many Muslims.

Rovera noted that many poorer Muslims who live further from the towns or who could not afford the fares lorry drivers were charging missed out on being evacuated when transport was more easily available.

We will do what is within our means, and we are deployed at churches and mosques, but it is very hard to get to every little spot

Muslims in Bozoum told IRIN that many of the Peuls who traditionally herd livestock in the area have fled to towns, or abroad, but others are still trying to guard their cattle, and inter-communal conflict is continuing in rural areas.

Father Gazzera, who organized several meetings to try to reconcile the communities, believes co-habitation between Christians and Peuls will be difficult in the Bozoum area in the near future.

“Some of the Peuls allied with the Seleka and took up arms against their neighbours,” he said. “They might be able to live together again after a year or two, but at the moment it’s complicated.”

The fact that most of the Peuls in the CAR are no longer nomads but have settled in villages could also make resettlement more difficult.

Aid starting to get through

More than two million people need assistance. Most of them have little or no access to medical services while hundreds of thousands are still displaced. The inter-communal violence that has swept through the northwest could spread to other parts of the country if the ex-Seleka lose control of other areas to the anti-balaka.

WFP says more food is needed in Bouar. WFP’s manager there, Florence Lanyero, says it has distributed food to 43,000 people in the Bouar area, including 4,000 Muslims and 5,000 malnourished children, but it cannot meet all the needs.

“We have a challenge to get food stocks into Bouar because roads are blocked,” Lanyero said. “I have requests from so many places, but... we don’t have much food on the ground.”

An aid worker said that among the requests for food was one from the anti-balaka’s commander, who warned that if his men are not fed they could be dangerous. Many youths calling themselves anti-balaka have assembled in Bouar in response to rumours of an army recruitment, and local authorities have organized a collection for them.

Senior aid officials in CAR have warned that guaranteeing security for convoys from Cameroon - not only for food aid but also for other essentials, including fuel - is crucial.

Lanyero said five UN agencies are operating in Bouar, including the Food and Agriculture Organization (FAO).

One aid worker said farmers need seeds for the planting season and providing inputs might persuade some of the anti-balaka to go back to their villages.