Unconfirmed media reports estimate that upwards of 75 percent of stray dogs in Myanmar have rabies, where the disease is endemic, but no one knows for sure. Hundreds of thousands of stray dogs are a serious threat, especially to people living in urban areas, health workers claim.

“It’s hard to say what percentage of stray dogs has rabies,” Aung Gyi, deputy director general of Ministry of Livestock and Fisheries, told IRIN, conceding there has yet to be a comprehensive survey to determine the dimensions of the problem.

San Lin, 25, doesn’t scare easily, unless he is being challenged by a stray dog. “It’s not that I hate stray dogs,” he said, fidgeting with the metre-long bamboo stick he carries for protection. “I am afraid of being bitten and getting rabies.”

According to health experts, rabies, an invariably fatal viral disease, represents the most serious potential complication of an animal bite for humans. Nearly all deaths from rabies in humans are the result from the bite of a rabid dog. Though the disease is preventable through timely pre- and post-exposure vaccination, death is inevitable once a person is infected.

According to the World Health Organization (WHO), upwards of 25,000 people die annually in the South East Asia Region, and accounts for 45 percent of reported human deaths worldwide. Myanmar has 1,000 deaths annually and is second only to India in the region, where the vast majority of deaths - 20,000 - are reported. However, many cases go unreported.

Myanmar has nearly 60 million people and a dog population is about 4 million. An estimated 600,000 people are bitten annually, many of them children, a WHO country profile notes.

"More community participation and greater awareness is needed to minimize its risks to public health. Prevention is better than control," said Dr Vinod Kumar Bura, a medical officer with WHO in Myanmar.

“Low level of awareness of the risk factors has made the problem worse,” said Kyaw Htin, a veterinary surgeon in Mandalay in central Myanmar, the country’s second largest city, which reports the most rabies cases. He is currently vaccinating stray dogs around Mandalay with his colleagues, but doesn’t actually know how many animals there are.

More health awareness campaigns should be conducted widely to promote both dog and human vaccination, and reduce preventable rabies cases. “The public is urged to register and vaccinate their dogs in order to reduce the risks,” said Aung Gyi, but that could be difficult, given the general lack of awareness.

Getting a dog vaccinated in Myanmar costs around US$5, but few owners in rural areas take this important preventive measure, while some veterinary surgeons suspect that supplies of anti-rabies vaccine may be limited.

The country produces 16,000 doses of vaccine a year for humans, which is described as sufficient, local media report. However, at $80 the cost of the vaccine is prohibitively high, particularly in a country where 26 percent of the population lives below the poverty line of $1 per day.

Many poor people don’t visit a clinic or hospital for a dog-bite. “People, especially in rural areas, commonly apply balm on the wounds for normal dog-bites,” said Dr Aung Aung Htay, a local practitioner who has worked in central Myanmar for years. Others turn to traditional remedies, while in some areas many believe that reciting some a mantra can heal a dog-bite wound, he said.

A scene at an animal shelter outside Yangon. Local media reports say there are thousands of stray dogs in the city, many of whom have rabies 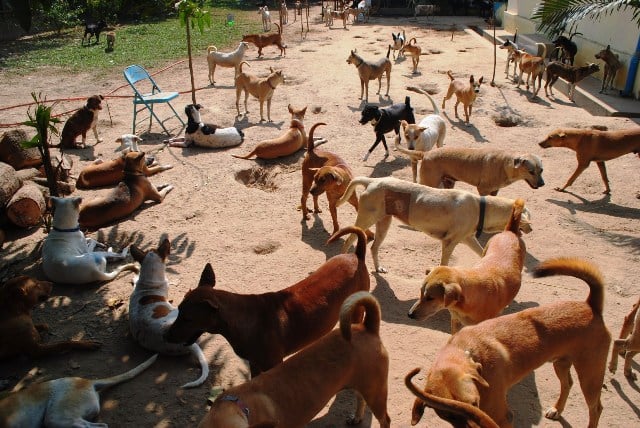 In an effort to reduce the number of stray dogs, along with the risk of rabies, municipal authorities in Myanmar’s larger cities have taken to culling the dogs regularly, with the Yangon City Development Committee killing about 2,500 each month, and drawing sharp criticism from residents and animal rights activists alike.

“It’s not the right way,” said Yangon resident Myat Thet Mon, who in 2013 rescued dozens of dogs in Mandalay from the hands of smugglers before they were sent to China to be eaten. She also gives food and shelter to 80 dogs in a small private compound outside the city.

Vaccinating and sterilizing are the best way to mitigate the risk of rabies, animal lovers say, and are calling for greater understanding and cooperation from the authorities.

Some animal lovers are also doing their best to protect stray dogs from being poisoned, taking the animals into their homes and hiding them when municipal staff come to feed them poisoned meat. Others take them to the dog shelters instead.

“More people are bringing stray dogs to our shelter,” said Ko Karen, the manager of the Yangon Animal Shelter, which cares for hundreds of dogs in a spacious compound to the north of the city.

In a mainly Buddhist country like Myanmar, people are generally against the killing of any animal, he said.