Dire conditions in Indonesia’s immigration detention system fuel outbreaks of violence, human rights activists claim. Many facilities are located in remote parts of the country, sometimes as much as 2,000km from the capital, Jakarta.

“The conditions in the overcrowded, squalid IDCs [Immigration Detention Centres] contribute to a tense atmosphere that can lead to violence,” Alice Farmer, a researcher at Human Rights Watch (HRW) and author of a 2013 report on abuses against migrant children in Indonesia, told IRIN.

The Indonesian government operates up to 16 centres to detain migrants who enter the archipelago illegally, mostly on their way to Australia, including asylum seekers who fled persecution and conflict in their home countries.

According to November 2013 data from the UN Refugee Agency (UNHCR), Indonesia hosts 10,897 refugees and asylum seekers, most of whom are from Iraq, Afghanistan, Pakistan, Sri Lanka or Myanmar.

On 6 April 2013, a group of Rohingya men - a Muslim minority in Myanmar - reportedly attacked a group of Burmese Buddhist men inside the Belawan IDC on Sumatra Island after a Muslim was allegedly sexually harassed. The fight that ensued left eight people dead.

Overcrowding, combined with long detention periods, violates rights and puts migrants at increased risk of violence, activists say. The first step toward a solution is better cooperation and monitoring.

Four times capacity is a crowd

Commenting on the April brawl to reporters, Deputy Law and Human Rights Minister Denny Indrayana claimed there were 480 migrants in the Belawan facility at the time, four times its capacity, according to an interview HRW conducted with the facility’s director.

Anil*, 35, a Sri Lankan migrant detained in Belawan for 11 months, witnessed the fight and said the mood inside the facility changed after the violence. “We were scared of more fights. We started to protest to be released.” An immigration official, who asked not to be named, said there were 265 migrants in Belawan IDC in mid-December 2013.

Belawan is not unique.

The 2013 HRW report said regular periods of overcrowding in several facilities resulted in “packed rooms with little or no privacy” and, in one case, one toilet for 37 people. The report also alleged several incidents of violence against detainees, including children.

“Inside Pontianak IDC [on Indonesia's Kalimantan Island], I spoke with dozens of migrants and asylum seekers who spoke of their fear of violence inside the facility,” said HRW’s Farmer. “The guards’ track record of beating detainees perpetuates this problem… no child, no asylum seeker, should be left in these conditions.”

Anil, the Sri Lankan migrant, said the conditions, including the quality and amount of food, and basic sanitation have been unreliable since he was first detained in January 2013. “For the past 20 days we have had trouble getting enough water because there is a problem with the pipes.”

According to UNHCR, 142 refugees departed for third country resettlement in November, mainly to Australia, bringing the total for 2013 to 875 individuals, the highest number in the past decade.

However, for many the waiting period can be excruciatingly long, and some asylum seekers stay in detention centres or other restricted housing facilities for years, unable to work or send their children to school, while they wait for news about their application.

This frustration drives many into the hands of people smugglers who attempt to take them to Australia on unsafe, overcrowded fishing boats.

Hundreds of asylum seekers lose their lives each year on the dangerous journey, many of them women and children. On 10 December a boat sank off of Indonesia’s coast, when three asylum seekers, including one child, died. 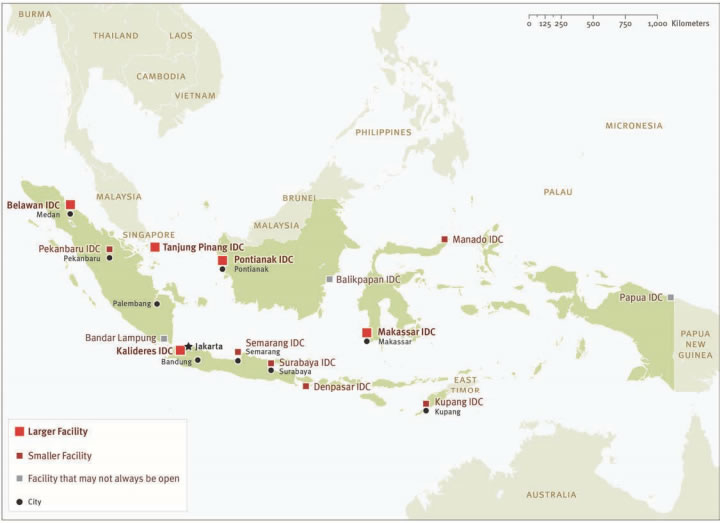 Cooperation at the core

Indonesia is not a signatory to the 1951 Refugee Convention or its 1967 Protocol, but observers say this should not prevent action to improve conditions in the IDCs, and call on Australia to take the lead.

“Ultimately, Indonesia should become party to the Refugee Convention, but that goal is a while off in the future, so interim measures need to be taken to improve conditions in the country for migrants,” said Graeme McGregor, the refugee campaign coordinator at Amnesty International-Australia.

HRW recommended that all Australian funding for migration activities in Indonesia be “conditional on respect for human rights and international standards on migrant detention conditions, including provisions for monitoring and review.”

McGregor pointed out, “Many immigration detention activities in Indonesia are funded by Australia, and while Australia is one of the only countries in the region with mechanisms, however faulty, for dealing with asylum seekers and refugees, there is a still a lot of hypocrisy in their policies and actions.”

Pointing to a series of recommendations Amnesty has made about Australia’s role regarding asylum seekers in the Asia-Pacific region, he said, “Working to improve detention conditions and practices in Indonesia would go a long way toward repairing that hypocrisy.”