For the past three weeks, every morning before the primary school starts in Ngon Laung village in Myanmar’s northwestern Chin State, Ba Thein, the principal, looks for a teenage student who has been absent for nearly one month.

Because of the late start to their education, some 17 percent of the primary school population is up to 13 years old, which is beyond the usual age of nine when most pupils finish primary school, said Bertrand Bainvel, the UN Children’s Fund (UNICEF) representative in Myanmar. He noted that older students are often at high risk of having to abandon their studies due to pressure to earn money.

“We wish she [would] come back to school,” said Ba Thein, looking out the window of his one-room wooden school in the valley where Ngon Laung is located – home to 184 inhabitants and a two-hour motorbike trip over rough terrain from Kanpetlet, a township in a mountainous area near the border with Bangladesh.

Chin is the poorest state in Myanmar and also one of the most remote. Around 52 percent of the students leave school before the age of 10, in part because they are called to help with housework or traditional hillside farming, said Ba Thein.

A 30-minute motorbike ride away in Ye Laung Pan village, Pan Kwee, 10, the only student in grade five in a school of 40 students, is concentrating hard on her notebook. She does not know whether her parents will be able to send her to town for more schooling next year, but she knows exactly what she wants to become when she grows up. "A scientist,” she says.

While she may be hungry for knowledge, some classmates are simply hungry for food. According to the latest national statistics, up to 58 percent of children under age five in Chin are chronically malnourished (having diets of poor caloric and nutrient value), which is the world’s leading cause of preventable brain damage and learning disability. 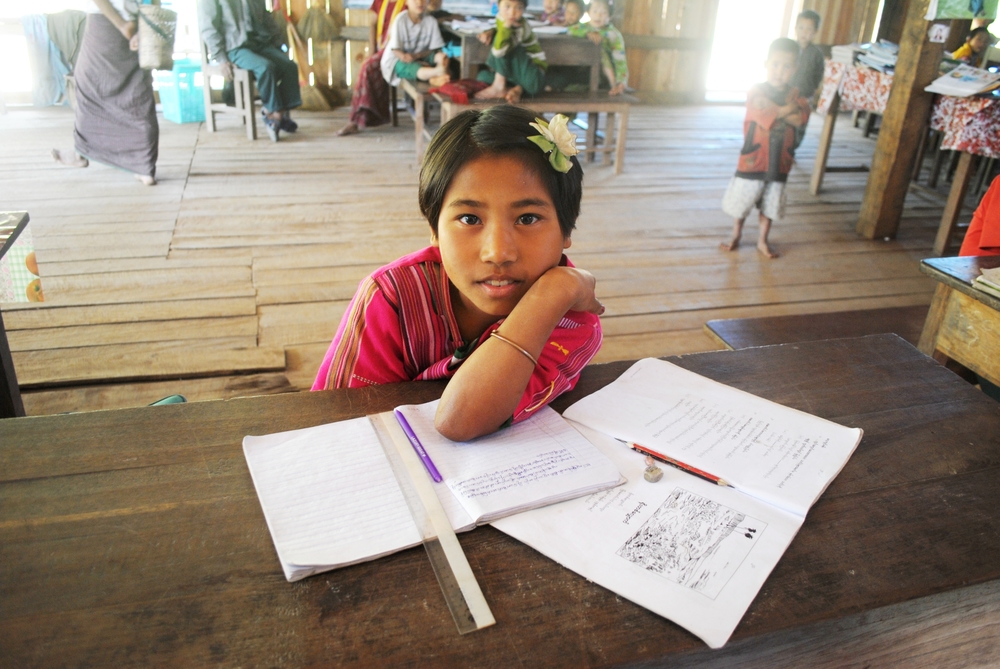 A teacher told IRIN some of her students are “slow” and “unable to follow lessons”, though she did not attribute this to malnutrition, while a doctor at the hospital in Kanpetlet said young children’s “unbalanced diets” are the cause of frequent falls when students hike to and from school.

In an assessment by the NGO, Solidarités International, published in 2012, almost all of the 135 households surveyed in Kanpetlet (96 percent) reported food shortages in the previous year, and more than 95 percent were in debt, mostly to buy food. According to the WFP Food Consumption Score, which measures dietary diversity and food frequency, 92 percent had poor or “borderline” scores.

The advantages of keeping children in school are high, say teachers, who point out that the classroom is an ideal place to raise community health awareness, because the students act as messengers to their families, which in turn could help break the intergenerational cycle of poverty and poor health.

Rain and rocks in the way of school

Lack of calories is only one challenge – climate is another. Cold winters, and heavy rains that sometimes wash away bridges during the May-September monsoon, can lead to hikes that take hours along rough roads and slippery muddy hillsides to reach school, say parents.

"Children may have to travel long distances over difficult, mountainous terrain," Bainvel said. "For this reason, parents may be particularly reluctant to send small children and girls to school.”

An inadequate number of teachers is also problematic, said Mat Aung, head of the primary school in Makyauk Arr village outside Kanpetlet. "It's a disaster when one teacher is on leave."

According to the Country Agency for Rural Development, a local NGO, in 2013 there were some 5,600 primary and secondary schoolteachers for about 121,000 students, spread over about 1,000 schools in Chin.

While some classrooms are sparsely populated, other teachers handle large classes filled with students of varying ages and learning abilities. Most students struggle to understand the language of instruction (Burmese, the official national language) in a state where some 50 languages are spoken. Chin educators teach students in the first two years of primary schooling due to their ability to communicate with the students in their mother tongue.

Even if primary school graduates want to pursue further study, it is difficult for them because most villages are located in rural areas that do not have secondary schools, which are found primarily in the state’s nine townships.

"While some parents can afford to send their children to stay and study in the town, many parents cannot," said Htuu Ei Mon, a primary school teacher in Ye Laung Pan village about a one-hour motorbike ride from Kanpetlet. Meals and accommodation for one month of boarding can cost up to US$60, a steep price for farmers who typically earn less than that.

“Instead, they just decide to work on the hillside, farming with their families," said Ba Thein, who added that no student from Ngon Laung primary school has ever advanced to the final four years of secondary schooling.