Whenever there is news about Afghanistan on the small television in the tea shop next to his food stall, Mohibullah Mughal listens carefully, catching the latest on the anticipated withdrawal of most foreign forces next year, the planned presidential elections and efforts to negotiate peace with the Taliban.

Then, Mughal says, he forgets about it all.

“Why should I worry about news from Afghanistan,” Mughal says, “when everyone knows things will never get better?”

Mughal, 29, is one of 1.6 million Afghan refugees registered with the government of Pakistan. Just as the papers of registered refugees were about to expire in June, the government extended their status one more time - until the end of 2015.

But the move, welcomed by the UN Refugee Agency (UNHCR), other humanitarian organizations and the Afghan government, is unlikely to help ease the uncertainty Afghan refugees face, both about their lives in Pakistan and regarding the future of their troubled country.

Pushing for conditions to improve

With repatriation efforts proving less successful than the Afghanistan government and humanitarian organizations had hoped, there have been parallel attempts to improve the conditions for refugees in Pakistan. Kabul and UNHCR have asked the Pakistan government to introduce some benefits for registered refugees, such as the ability to open bank accounts, buy mobile phone connections and get driving licences.

So far, there has been no progress on this front.

“We understand that conditions are less than ideal in Afghanistan, and it is understandable that the refugees do not feel comfortable returning in these circumstances,” a senior Islamabad-based Western diplomat involved with refugee affairs told IRIN, requesting not to be identified because of the sensitivity of ongoing discussions on the matter. “So the idea behind these proposals, such as bank accounts, is to try and make their lives as comfortable as possible over here.”

The Pakistan government has yet to make a decision on allowing Afghan refugees to open bank accounts, buy SIM cards or get driving licences. “We have received this request many times, and are working on it. There are issues with policies and rules that we have to navigate. Only then will it be possible,” a Pakistani official at the Commissionerate for Afghan Refugees in the Khyber-Pakhtunkhwa Province told IRIN, requesting anonymity because he is not authorized to speak to the media. “To be honest, we don’t know when this can happen.”

These services, while basic, would improve conditions significantly, Afghan refugees say, especially the ability to deposit their earnings in bank accounts.

“I have lost count of the number of times policemen have stopped me for no reason and forced me to pay a bribe, just because I’m an Afghan,” says Khan Mohammed, 24. “I had a valid POR [proof of registration] card. It didn’t matter.”

Mohammed, who works as a day labourer at Islamabad’s main wholesale market, says he would feel more secure if he were able to deposit money in a bank account and save as much as possible. A driving licence, he says, would give him more employment opportunities. 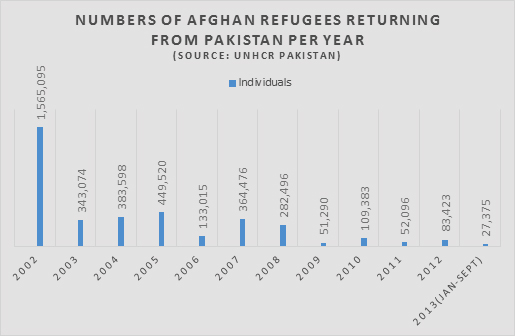 Even if they do not get these facilities, refugees told IRIN in interviews, they would prefer to stay in Pakistan and not return to Afghanistan because of the security situation there and a lack of economic opportunities.

“We are worried every time the expiry date of our POR cards nears,” says Saeed Anwar, a cloth merchant in the town of Haripur, home to one of the largest Afghan refugee communities in Pakistan, an hour’s drive north of Islamabad. “We don’t know what will happen to us, but I will not risk taking my children to Afghanistan.”

Afghans in Pakistan are one of the largest refugee communities in the world, displaced by decades of conflict in their home country. The Pakistan government estimates around a million are unregistered. Mughal, like many Afghan refugees, was born in Pakistan after his parents fled the war in the 1980s.

The situation is similar in Iran, home to the second largest Afghan refugee population. Hundreds of thousands of refugees were threatened with deportation back to Afghanistan last month.

UNHCR says the authorities in Iran and Pakistan are suffering “asylum fatigue” and are increasingly eager to see the refugees to return.

Despite efforts by the Afghan government and UNHCR to help repatriate Afghan refugees, the number of Afghans returning to their country has been declining in recent years. The violence in the country, especially with the resurgence of the Taliban in the last seven years, is discouraging many who had been thinking about heading back home.

A recent survey by the Danish Refugee Council suggests that 83 percent of Afghan refugees in Pakistan were not keen to return home.

“I visited Afghanistan earlier this year; conditions there are terrible,” says Mughal, who sells burgers and fries at his stall in Pakistan’s capital, Islamabad. “If you have a beard, the government and the foreign forces think you are in the Taliban, and they come after you. If you are clean-shaven, the Taliban think you are an American spy. Then they come after you. No one is safe.”

"Afghanistan was my parents’ home. I have no country."

Given the protracted nature of the displacement, analysts say reforms to give refugees more legal rights would ease their circumstances.

Anwar, 50, who came to Pakistan as a teenager, says he is unfairly treated by his landlord, who charges Afghan refugees higher rents for their shops. “If I have a bank account, if I have some legal standing here, maybe he will not think he can get away with this kind of behaviour.” He says he will continue running his small shop in Haripur; his two attempts to set up a business in Kabul failed.

In Islamabad, Mohibullah Mughal faces similar treatment from the man who rents him the space for his stall, and says it is because he is an Afghan refugee. Pakistan’s laws do not allow for citizenship by birth or naturalization for refugees.

“Every time I deal with a policeman who wants a bribe, or when someone says ‘Hey, Afghan’ instead of my name, I am reminded that this is not my country,” Mughal says.

“Afghanistan was my parents’ home. I have no country.”