Song Kong, a 56-year-old farmer in Cambodia's southern Koh Kong Province, vividly recalls the day in 2006 when a bulldozer arrived and began clearing his paddy field to make room for a sugar plantation. Since then, life has become much worse for him and 456 other families who also lost their land in Sre Ambel District.

“Before my farmland was taken from me, I was able to save at least US$1,000 every year. Now, I don't have any land, so I rely on fishing in the rice fields and streams,” said Kong, a representative of the community. He earns between US$1.25 and $2.50 per day - not enough for his family of six to live on - so there is nothing left to put aside for a safety cushion, or plan for a better future.

Kong is not alone. Across Cambodia more than 700,000 people have lost their homes and land due to economic land concessions, many to plantations that supply sugar to some of the world's largest beverage brands. Sugar cane covers more than 100,000 hectares of Cambodia.

Rights groups say sugar is one of the biggest drivers of land evictions. With the global demand for sugar expected to increase by 25 percent by 2020, advocates warn that more rural Cambodians will be pushed off their land to make room for companies supplying PepsiCo and Coca-Cola, two of the world's largest purchasers of sugar, according to a new Oxfam report released on 2 October.

“We found evidence that sugar production has a large influence on land rights, and there is more and more evidence of the effects sugar has on land grabs,” said Gertjan van Bruchern, Oxfam's associate country director in Cambodia.

Mounting criticism both nationally and internationally led Prime Minister Hun Sen to hand out land titles to communities across Cambodia just ahead of this year's national election. Cambodian government spokesman Phay Siphan said a moratorium by Hun Sen had put a halt to all land concessions since 2012.

However, Eang Vuthy, executive director of Equitable Cambodia, the Oxfam local partner that works with many communities where evictions have occurred, said new sugar cane fields were still being planted on undeveloped concessions.

Most Cambodians do not have proper land titles – a legacy of the notorious Khmer Rouge regime [April 1975 to January1979], which destroyed ownership documents – making people particularly vulnerable to land-grabs, Eang said.

More than 1,000 families in 10 villages in Cambodia’s central Kompong Speu Province are at now at risk of eviction as a result of a 20,000-hectare sugar cane concession. “They are still fighting for their land, but they don't have proper land titles,” Eang said.

Phay said the government could only help communities if the companies were seriously violating Cambodian law. “But if the families have no land title, they live there illegally.”

Huge profits are being made though a scheme by the European Union (EU) called Everything But Arms (EBA), which allows the world's poorest countries to ship products to the EU duty-free.

In 2011, Cambodia's annual sugar exports jumped to $13.8 million - 270 times the amount made from sugar exports two years before - and more than 90 percent was exported directly to the EU.

A woman cuts sugar cane at a plantation of Srei Ambel, Koh Kong, Cambodia. Thousands of people have been forced off their land to make room for sugar production, activists say 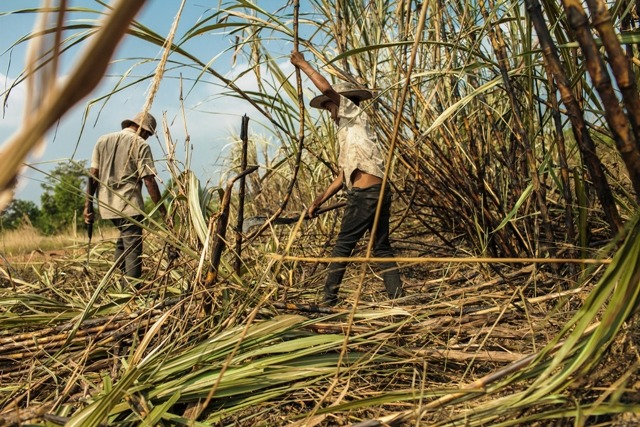 Equitable Cambodia alleges that instead of improving the livelihoods of farmers like Kong, EBA has helped increase the wealth of tycoons. Most of the evicted families now have to work for the company that dispossessed them to earn money during the harvest season.

Kong sent his 19-year-old daughter to work at the plantation. “We don't have any money saved. We simply make enough money for each day at a time.”

PepsiCo and Coca-Cola, who source Cambodian sugar, did not reply to requests for comments, but both state on their websites that they are committed to helping local communities.

“[O]ur Company is focused on initiatives that... create a safe, inclusive work environment for our associates, and enhance the economic development of the communities where we operate,” Coca-Cola says on its website.

Oxfam's report, “Nothing sweet about it: how sugar fuels land grabs”, argues that the brands are fuelling further land grabs by not taking responsibility for land rights violations by their suppliers. “There should be strict criteria for which sugar they will buy,” Oxfam's Van Bruchern maintains.

Oxfam launched a worldwide “Behind the Brands” campaign in February to raise consumer awareness of the industry, and of farmers like Kong, and is hoping to pressure food giants into becoming more ethical.

Van Bruchern said Oxfam would like to encourage consumers to challenge companies selling soft drinks that contain sugar, to ensure the drinks are produced without violating any land rights. “If consumers start to raise questions, it will definitely be worth the companies' effort and money” to focus on the origin of their sugar supply.