Pakistani schoolgirl Malala Yousafzai’s speech at the UN in New York calling for “free, compulsory education all over the world for every child” is a reminder that back in her home country several million children are out of school, exploited for their labour, and/or abused.

The most recent annual State of Pakistan’s Children report, published in May by the Islamabad-based NGO Society for the Protection and Rights of the Child (SPARC), found that out of 120 countries in the world, Pakistan has the second largest number of children out of school (after Nigeria), with 5.1 million children aged 5-9 not attending an educational institution.

“Education is vital for our future. Only when they read can they research, think and do something for the nation. Without education in its true sense there is no hope for this,” said Basarat Kazim, president of the Lahore-based NGO Alif Laila Book Bus Society which campaigns for education, literacy and modernization in the education sector.

A significant number of these children end up in the workplace.

“Child labour is a highly accepted social norm from a very young age for both girls and boys,” said Smaranda Popa, the chief of child protection at the UN Children’s Fund (UNICEF) in Pakistan. “These children are not only denied access to their rights to education, protection, health and development but are also highly vulnerable to abuse and exploitation.”

Figures on the precise number of child workers are somewhat uncertain, with estimates ranging from 3.3 million, according to a 1996 figure from the Federal Bureau of Statistics, to 12 million, according to more recent estimates by media reports and NGOs. The International Labour Organization estimates one quarter of these children are involved in the worst forms of child labour, including slavery, commercial sexual exploitation of children, using children to commit a crime, and work that is harmful to the “health, safety or morals” of children.

The Pakistan Bureau of Statistics in its 2010-11 Labour Force Survey puts the number of child workers at just 4.29 percent of the country’s children aged 10-14, in other words 855,426 of the 19.94 million children in that age range, according to 2011 figures from the government’s Economic Survey.

According to SahibaIrfan Khan, programme officer child labour at SPARC’s Lahore office, the only major law on child labour is the Employment of Children Act 1991, “which just regulates child labour for those less than 14 years of age and prohibits it in specific occupations and processes.”

These laws are frequently weakly enforced, particularly in the area of domestic labour.

Earlier this month, an incident in which an influential employer had beaten her 13-year-old domestic servant, Jamil, to death after he dropped a jug was widely reported in the media and confirmed by police in the southern Punjab city of Multan. “Investigations in this case are continuing,” city police officer Ghulam Muhammad Dogarm told IRIN.

Another local administration official, who asked not to be named, said child labour was high in the area due to poverty, and “complaints of physical or sexual abuse are made but not often acted on because the families of the victims do not have much power.” He believed the incident involving the murder of Jamil was taken up only because “the news reached the media.”

Other cases of abuse go unreported. “My 11-year-old daughter, Habiba, worked as a maid in a big house, helping to look after three young children, and doing all kinds of other tasks such as washing dishes,” mother Shahida Bibi, of Lahore, told IRIN.

“I took her home after I visited one day and found her covered in bruises as a result of the beating she had received from her employers, who said she did not work hard enough. She also told me she was made to labour for up to 14 or 15 hours a day.”

Such stories are not unusual, according to SPARC. “Thousands of children working as domestic servants are deprived of their basic right to education and are often subjected to abuse and violence,” said Khan.

Data compiled by the organization shows that between January 2010 and December 2011, 18 cases of “severe” torture and abuse of child domestic labourers were reported. Of these 18 children, 13 died as a direct result of the violence inflicted upon them at the hands of their employers.

“In the first six months of 2013, 14 cases of violence against child domestic workers were reported in media, out of which nine resulted in the death of the child,” Khan said.

Poverty, inadequate educational facilities and a lack of awareness of the negative impacts of such work are a key cause of the high prevalence of child domestic labour, with families sending children into domestic service.

The poor condition of state-run schools, and the lack of access to them, notably in rural areas, also makes it more likely children will be sent to work.

According to the government’s Economic Survey for 2012-13, the literacy rate in rural areas, at 49 percent, is significantly lower than the 75 percent in urban areas.

Yusuf, 12, has worked as a labourer in Lahore, Pakistan since dropping out of school last year 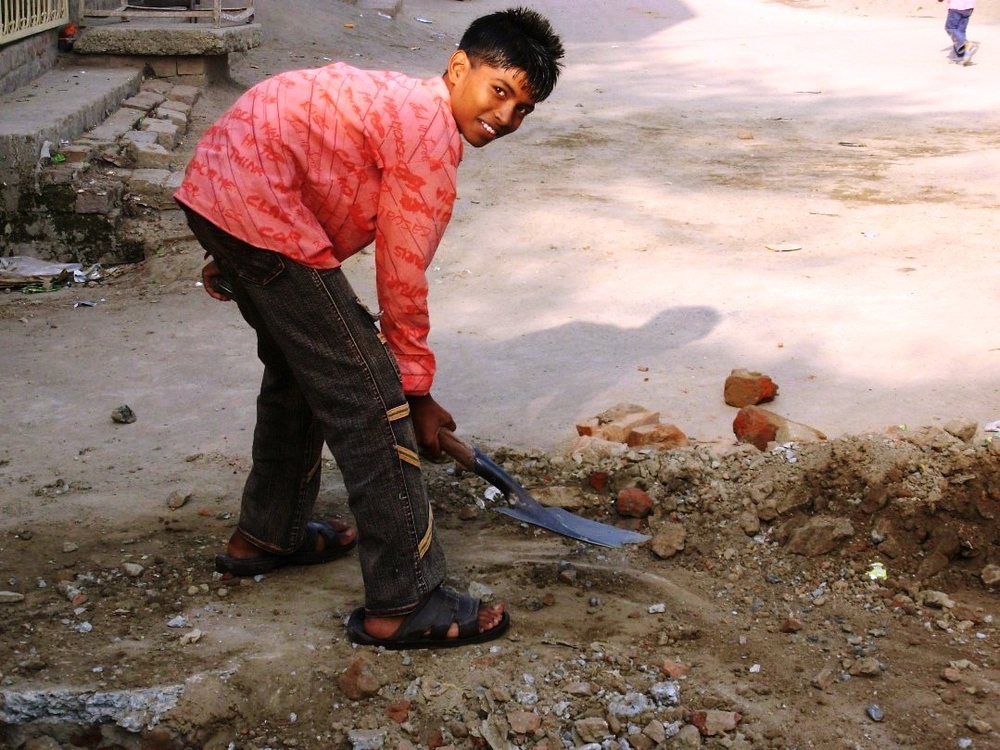 Facilities at public-sector schools are often dismal, with many lacking furniture, fans, drinking water, toilets, or teachers. According to the 2012 report by the Pakistan Education Task Force, set up by the government in 2009, seven million children are currently out of school and 30 percent of citizens “live in extreme educational poverty”, with 15-20 percent of teachers absent from the classroom on an average day.

“My son, aged 10 years, simply kept running away from school, because he was shouted at by his teachers, sometimes beaten and taught very little since his teacher rarely came,” said Muhammad Hanif, who lives in the settlement of Shahdra on the outskirts of Lahore.

Hanif says he was unable to pay for private schooling, and rather than have his son “roam around on the streets”, he arranged for him to be employed as a house-help. “He is at least given his meals, even if it is just a few leftovers or lentils, and he brings home Rs 2,500 [US$25] each month,” Hanif said.

The wage is less than half of what would, in most cases, be paid to an adult. SPARC says children are preferred for domestic labour because they are considered more obedient, and can be hired for less pay.

There is, however, a twist to the tale. For generations, employing child domestic workers has been considered an act of charity.

“Employers believe that since employing poor and unfortunate children is in itself a great favour to the child, they have the liberty to treat them as they wish,” Khan said. This attitude is also tied in to traditional culture in a society highly stratified on the basis of class and wealth.

“Feudal lords are not just large landowners or big farmers. Land is the sole economic resource in a good part of this country and whatever little opportunities, other than land, have arisen lately have also been monopolized by the same class,” said Tahir Mehdi, executive coordinator of the NGO LokSujag, which campaigns for democratic rights and social equity.

Speaking of employment by the wealthy, he said: “They treat their subjects as pairs of hands that should work for them like robots that need to be oiled but don't have any rights and can't make any demands.”

Of course, not every child domestic worker suffers. Some, like Pervez Zaman, 13, are more fortunate. Zaman, from the north of the country, says his employer in Lahore pays him well, has given him an additional food allowance and is now planning to arrange for private lessons so he can catch up on the studies he missed out on when he was younger.

However, such cases are rare. The incidence of abuse among young domestic workers is high, as SPARC has recorded, while simply being at work also means they are missing out on schooling.

To address child labour, UNICEF says, Pakistan must harmonize its legislation with international standards, implement those laws, provide functional child and social protection systems including for family poverty, improve access to and use of social services, and increase the amount of “decent” work available to adults.

“Any state invests in its sustainable development by investing in education,” Popa said. “No child should be forced to substitute school with the worst forms of labour.”