An increasing number of Muslim Sri Lankans, who make up around 9 percent of the population, are feeling uneasy amid fears of growing sectarian tensions, say local people and observers.

“We just don’t feel we belong here any more,” Fadhil Ahamed, who works in a food store in Colombo, told IRIN. “I had a shop where I sold halal food, but several Buddhist monks who were aligned with a government politician told me not to sell halal food as this was a Sinhalese Buddhist country.”

There is increasing fear within Sri Lanka’s minority Muslim community, the 54-year-old said, and many feel they are being targeted by ultra-nationalist Buddhist groups because of their faith.

"Tensions are clearly on the rise. There is a lot the government and especially the police can do to handle this situation. It does not look like this is happening, and thus tensions are on a high as we speak,” said Ahamed Lebbe, a former school teacher and community activist in Batticaloa.

In recent months, groups led by Buddhist monks have spread allegations that Muslims have been dominating businesses, while at the same time claiming they are trying to take over the country by increasing their birthrate, local media reports say.

Sinhalese-Buddhists comprise almost 75 percent of the country’s 20 million people, according to the Department of Statistics and Census.

In May, Azard Sally, an outspoken Muslim politician and a former deputy mayor of Colombo, was arrested under the Prevention of Terrorist Act, for “instigating communalism”, according to police sources.

Sally is an outspoken critic of a new hardline Sinhalese Buddhist group Bodu Bala Sena (Buddhist Strength Force), which since February 2013 has reportedly attacked a number of Muslim-owned commercial establishments, and agitated against certain religious practices, including the halal system of slaughtering animals for Muslims.

Sally is also a vocal critic of the government of Sri Lankan President Mahinda Rajapakse and blames the authorities for allowing an anti-Muslim campaign that culminated in an arson attack on two Muslim-owned businesses in March.

Though released on 10 May, his arrest underscores growing anxiety among many Sri Lankan Muslims.

"It seems as if they [the government] pervert the law to arrest anybody who stands to protect the Muslim community," said Fatima Mira, a university student from Colombo.

“When Sinhalese extremists attack Muslims, the government watches as spectators, while when Muslim politicians stand up for their community, they are arrested and painted as terrorists,” the 32-year-old said - a sentiment echoed by others.

Outside a Buddhist temple. Theravada Buddhism is Sri Lanka's predominant religion with more than 70 percent of the country's 20 million population being followers 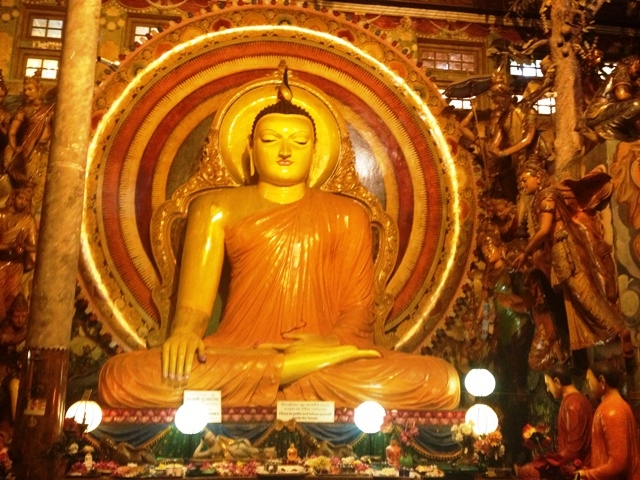 “There is no peace for Muslims this year in Sri Lanka," said 46-year-old Muslim Colombo resident Hazeel Segu, a local community leader.

According to Jehan Perera, who heads the National Peace Council in Colombo, Sri Lanka continues to be a polarized and fragmented society at various levels - economic, social, religious and political, more than four years after the country’s 26-year civil war officially came to an end. This has led to a lack of communication and acute mistrust between parties on different sides of various divides, including Buddhists and Muslims.

“There is a sense of exclusion among communities, who feel they are not being included in national decision-making and in enjoying the fruits of development,” Perera said.

Since 18 May 2009, when government forces declared victory over the Tamil Tigers (LTTE), who had been fighting for an independent Tamil homeland for more than 25 years, the country has failed to make a successful transition to a sustainable peace, said Dayan Jayatilleka, former Sri Lankan ambassador (2007-2009) to the UN in Geneva.

“The blocked transition is due to the unwillingness of both major communities [Sinhalese and Tamil] to be self-critical and to reach out to one another in order to forge a new social contract,” he told IRIN.

Meanwhile, Rajiva Wijesinha, a ruling party MP and Sri Lanka's former secretary to the Ministry of Disaster Management and Human Rights, described recent agitation by certain groups as “counterproductive”, and has called on the government to do more to mitigate racial and religious tensions.

“What [the] government must do is be much more inclusive and have more discussion between all parties and make it very clear that the government rejects extremisms in all its forms,” Wijesinha said.

“While we understand that there are fears of certain groups, we cannot allow fears to dominate the discourse. Driving concepts should be concepts of national unity and sympathy for others. One very simple thing that government can do is to arrest people who are engaged in violence and it is disgraceful that this has not been done. The fact that Azard Sally was arrested for a comment shows a complete bias.”