“When my sister-in-law first came to visit after my wife gave birth she couldn’t sleep at night after seeing Nhan because she was so shocked,” Cuong said.

He later had to give up his job at a concrete factory to take his son on regular trips to the hospital, which they funded by selling part of their house.

“I’ve sent a lot of letters to authorities to ask for help,” Cuong said.

But despite the hardship, Cuong says a great source of comfort has been talking to other parents with similar problems. “When I open my heart it releases the stress and sadness,” he said. “It helps me a lot.”

Cuong finds opportunity to do this at a support group funded by local charity Children of Vietnam (COV). As part of their Hope System of Care the charity trains community care workers to help families with disabled children access services already provided by local government.

Around 30 community care workers in the district have been trained to liaise with up to seven families each. Care workers arrange a meeting with all their families at least once every two months.

The charity also provides additional assistance in the form of microloans and vocational training. Thanks to the group, Cuong’s son Nhan is now at a special school instead of being cared for at home. The meetings do not just provide practical advice, but also emotional support. Parents often call each other for advice or just to chat.

“Some of my friends don’t want to listen to my problems with my children,” mother of two children with developmental delays Vu Thi Thu explained. “The people in the group are really sympathetic. I see other children in the group who are much worse than my son and I feel very sympathetic.” 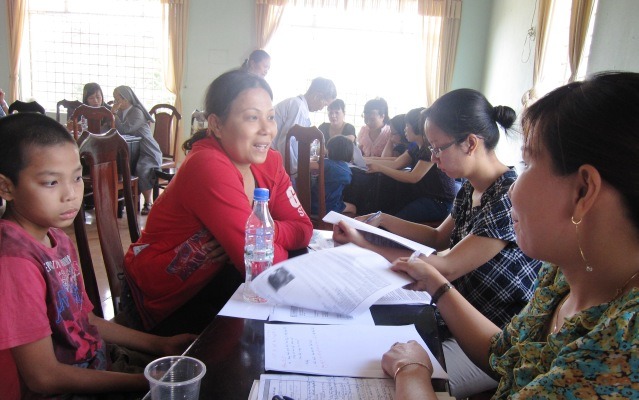 According to UNICEF’s 2013 State of the World’s Children’s report published on 30 May, children with disabilities are among the most vulnerable to violence, abuse, exploitation and neglect, particularly if they are hidden or put in institutions - as many are because of social stigma or the cost of raising them.

The combined result is that children with disabilities are among the most marginalized people in the world.

Disabled children and their communities would both benefit if society focused on what those children can achieve, rather than what they cannot do, the report stressed, calling for changing attitudes, inclusion and better social services to help disabled children.

“Parents groups are extremely important in changing the social norms that lead to discrimination and in providing support from peers that make such a huge difference to the parents,” UNICEF’s executive director, Anthony Lake, told IRIN.

Getting governments to sign the Convention on the Rights of the Child and setting up policies are “a sine qua non”, Lake said, but are not self-fulfilling. “What matters is at the local level and in communities,” he said.

COV first gathered parents together in 2011 to ask them about whether or not the charity’s work was effective, but Nancy Letteri from COV, says after getting everyone together, the tone of the meeting quickly changed.

“One parent was having a challenge and she got very emotional in this meeting then suddenly another parent straightened her back and said `don’t you let this happen, and this is what you should do’, and this was like water breaking through a dam. The whole group erupted and gave her advice and support. It was phenomenal to see that,” she said.

In tackling discrimination, UNICEF’s report stresses the need to emphasize what disabled children can do, rather than what they can’t do; a sentiment echoed by Cuong.

“First thing, very importantly, they [disabled children] should have independence so they too can help support their family,” he said.