In a move that experts say could open the door to a more robust aid response to chronic violence in urban areas, the European Commission’s humanitarian aid arm, ECHO, has approved two million euros in funding for violence-hit slums in Central America and Mexico until the end of 2014.

The world’s 10 most violent cities in 2012 were in Latin America, according to a study (Spanish) by the Mexico-based Citizens’ Council for Public Security and Criminal Justice; and Latin America is considered the part of the world where slum residents are most heavily burdened by organized crime and violence not linked to traditional armed conflict. But as more and more cities see rapid and often haphazard urbanization, experts say other parts of the world could increasingly face similar challenges.

If large-scale aid work in so-called “other situations of violence” is the way of the future, there are certain things humanitarian workers will have to keep in mind.

“It’s particularly true in situations of urban violence but it's true with urban issues in general - they are a real and significant challenge to the existing model of humanitarian action,” Paul Knox Clarke, head of research and communications at the Active Learning Network for Accountability and Performance in Humanitarian Action (ALNAP), told IRIN.

ALNAP is putting together a “lessons learned” paper drawing from the handful of cases where humanitarian agencies have intervened in slums hit by violence.

In the meantime, here are a few strategies:

As one of Rio de Janeiro’s notoriously violent slums prepared for the April opening of a visual arts centre, some people asked why a slum would possibly need such a thing.

While many slum communities are poor, that does not define them.

“In these areas you have deprivation of basic rights, but you have a very active social fabric,” said Adriano Campolina, head of ActionAid in Brazil. Such communities can be seen as very weak and humanitarians might misguidedly focus only on the most basic of needs - shelter, food, emergency care, Campolina told IRIN on the sidelines of a conference in Rio.

“Depending on the way [a humanitarian agency intervenes], if you focus only on this and you don’t appreciate that the community’s struggle is for the full range of rights as a citizen, you risk undermining these people.”

Humanitarian aid in already marginalized slum communities could further stigmatize residents, ActionAid’s Campolina said. “The people in these communities have over the years built their own ways of mobilizing, organizing, and negotiating. If you ignore that and you just dump humanitarian aid, you may actually further ostracize the people.”

Robert Muggah, professor at the Institute of International Relations at the Catholic University of Rio de Janeiro and research director at Igarapé Institute, a Rio-based think tank, says humanitarian actors with their “quick-in and quick-out mentalities” could undermine local forms of resilience and response.

He says city dwellers are dependent on services to ensure their livelihoods in ways the rural poor are not. “The rapid distribution of aid can unintentionally disrupt their networks and associations, often in dangerous ways. [Humanitarian action here] will require a high degree of sensitivity to local realities, willingness to work through community partnerships, and a considerable level of situation awareness.”

Understand local dynamics - even more so

At the conference, hosted by HASOW (Humanitarian Action in Situations Other than War), discussions about Brazil’s slums pointed out the importance of understanding what Harvard Humanitarian Initiative's Ronak Patel called slums’ “small-p politics”: power relationships among various groups; factors determining identity and status; and interplay among residents, authorities, and armed groups.

Waiting area of a health center in Guatemala, where Medecins Sans Frontieres (MSF) is working to improve access to medical and psycho-social care for survivors of sexual violence 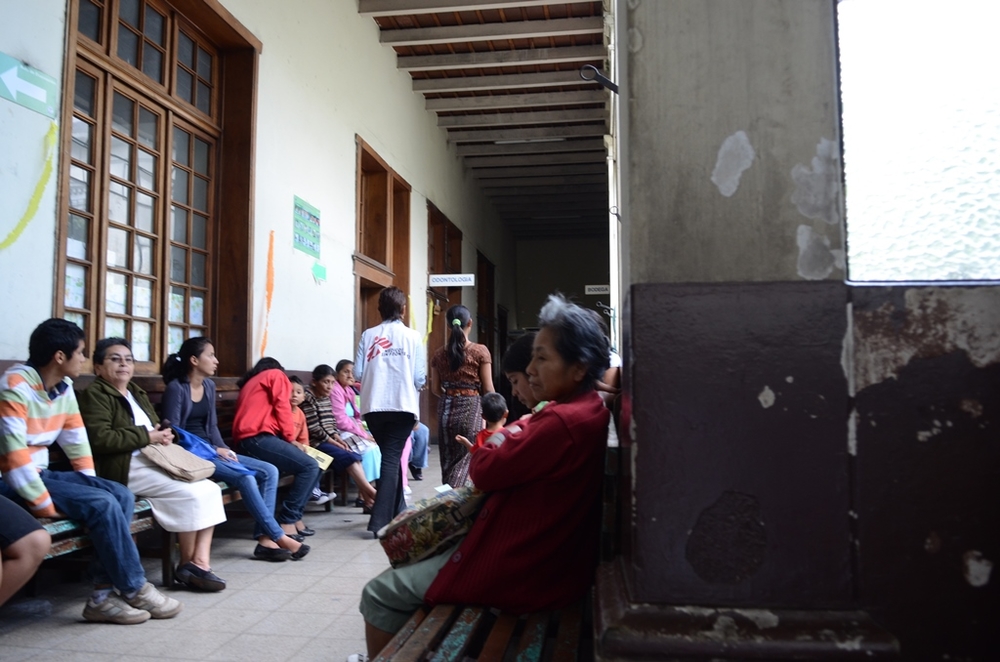 Aid experts say while an understanding of the local context is important in any humanitarian intervention, it is that much more critical - and complicated - in violence-hit slums.

“This is going to make the difference between a relevant and valid operation and something you're doing completely blindly,” said Vicente Raimundo, rapid response coordinator with ECHO’s office for Latin America & the Caribbean. “What is going on in El Salvador, for example, has little resemblance to what's going on in Honduras or in Guatemala. `Other situations of violence’ is a regional phenomenon that has a lot of local characteristics.”

But the complexity of the local context is no reason for humanitarian aid agencies to stay away, says Javier Rio Navarro, Médecins Sans Frontières operational adviser in Mexico and Central America.

“During any intervention, there is the need to understand the actors and the context to be responsible in the way you interact,” Navarro told IRIN. “Yes, working in urban settings is different from working in the bush. In the bush it's you and your patients. In these urban settings you've got a much wider range of actors - also a wider set of perpetrators of violence. This makes things more complicated, but does not fundamentally change our function and mission and should not turn violent urban settings into no-go areas for humanitarians.”

Be extra meticulous in targeting

“In these urban societies where you have violence, people do not survive on their own,” he said. “They belong to networks - be they gangs, age groups, neighbourhood cliques. But if you get stigmatized because you’re targeted by a humanitarian agency, you’ve got to choose between being part of that targeted group or part of your network. And this is sometimes a choice between life and death.”

Stigmatization can be for reasons as simple as being “singled out” as a recipient of aid, in ways others in your network have not been.

Grünewald says he finds it “both fascinating and terrifying” how little interest there seems to be in the humanitarian aid and donor community for the kind of anthropological study required to understand these dynamics. He says getting to know the sociological and anthropological setting is a vital operational issue.

Be wary of your mandate - and your expertise

Many aid experts say the debate over intervening in such settings is shifting from whether to how. Still there are more questions than answers, including the applicability of international humanitarian law.

“What possible role could outsiders provide in terms of advancing the situation on the ground that locals couldn’t do? Perhaps there’s the neutrality aspect, but not operationally… I don’t think they [international NGOs] bring anything to the table. In urban settings - [there is a] clear role for humanitarians in assisting refugees or in natural disasters - beyond that, no.”

He acknowledged that the definition of humanitarianism has been stretched in recent decades. “But one of the things that has made humanitarian action effective is that it worked in emergency settings... Violence in urban settings is a classical human rights and development situation.”

Some agencies and donors, including ECHO, say uncertainty about the legal framework does not bar them from acting.

“We focus on the humanitarian consequences, on humanitarian needs, regardless of the causes,” ECHO’s Raimundo told IRIN. “If there are proven, unmet needs then there is a basis to act.”

For more, see IRIN’s piece on how fear of urban violence is creating humanitarian need.